Gaida Ensemble at Home and Away

Often tagged as a "dream team of Lithuanian musicians" or "the ambassadors of new Lithuanian music", for the third season in a row Gaida Ensemble proves to be the prime exponent of Lithuanian contemporary music abroad. Formed in 2002, as a collective of brilliant free-lancing musicians, true experts in genres as diverse as classical, contemporary and jazz, this 15-piece sinfonietta has no regular concert season at home, except annual appearances at its parent festival. Its activities are currently concentrated not so much on scheduling endless concert series and itineraries as on nurturing of the local contemporary repertoire for large ensemble, which was glaringly wanting on the local music scene. Being the first and singular ensemble of its kind in Lithuania, in three years it has initiated and performed around ten new pieces by the leading Lithuanian composers and doubled this number by putting some of the most demanding and adventurous contemporary works on their active list. With a special predilection for complexity that is often a prerequisite to artistic excellence, the ensemble's repertoire now includes old and new works by Osvaldas Balakauskas, Bronius Kutavičius, Remigijus Merkelys, Šarūnas Nakas, Jurgis Juozapaitis, Algirdas Martinaitis, Vykintas Baltakas, Vytautas V. Jurgutis and Raminta Šerkšnytė combined with some of the most prominent scores by György Ligeti, Luciano Berio, John Adams, Luca Francesconi and Kaaija Saariaho, among others. Four of their very first acquisitions to the repertoire – Nakas' Aporia, Merkelys' Compass, Jurgutis' Telogenos and Juozapaitis' Jaura – are now available on the new SACD released by the Swedish Caprice Records in early October.

The international touring of the Gaida Ensemble usually intensifies in autumn when the Gaida Festival approaches and new pieces are being commissioned for the Ensemble's lineup, with a notable exception in their remarkable debut made at the MaerzMusik festival in March 2003. Last year they presented several Lithuanian premieres at the Klangspuren Schwaz festival partnered by the dazzling British violin virtuoso, Irvine Arditti. In October of the same year they were invited to perform Vykintas Baltakas' orchestral piece Poussla together with the Orchestra Regionale Toscana under Dominique My at the Venetian "La bienalle musica".

This year a new programme of homages was conceived especially for the Göteborg Art Sounds Festival, made up of Lithuanian pieces which have some connection with the music of the past. Reduced to a group of six performers, Gaida Ensemble Soloists, it has detected such connections in six pieces by Osvaldas Balakauskas, Onutė Narbutaitė, Vidmantas Bartulis, Antanas Kučinskas and Remigijus Merkelys. The relation of Balakauskas' Rex Re (2000) to classical music is defined by its rhythmic, melodic and harmonic features as well as by the 'reigning' note re as a symbol of tonality, a centre of the European tonal system, and an axis of symmetry. Narbutaitė pays homage to Mozart and Schubert in her Mozartsommer 1991, a mosaic of short patterns from Mozart's late works, and Winterserenade of 1997, which is a superbly handcrafted weft of Schubert's motifs from the first song of his Winterreise cycle. A homage in the form of postmodern bricolage (though perhaps without its iconoclastic irreverence) is central to the three remaining pieces: Kučinskas loops some measures of Mendelssohn's Trio in D minor in his Loop in D minor (2004); Bartulis obviously likes Berlioz in his I Like H. Berlioz (Lointaine) (2003); and Merkelys plays with different meanings of his MiKonst (2000) – as abbreviated given names of Mikalojus Konstantinas Čiurlionis, whose piano pieces are being quoted, as constantly repeating note mi, and as an art to play such smart tricks (if we were to translate "art" into Swedish "konst"). The participation of GES in the Göteborg Art Sounds (on Oct. 2) was made possible through generous support from the Lithuanian Ministry of Culture, Lithuanian Embassy in Sweden and East Capital, a Stockholm-based asset management company.

Apart from premiering and promoting Lithuanian works, Gaida Ensemble is always looking for opportunities for collaboration with composers from other countries as well. This year they will have two such opportunities. On Oct. 30 Gaida Ensemble Soloists will present the shortened programme of homages (including pieces by Balakauskas, Narbutaitė and Merkelys) at the 32nd Pan Music Festival in the spectacular premises of Seoul Arts Centre, featuring new works by three South Korean composers (Jong Yeoul Chong, Yoon Hee Hwang and In-Ho Park). This collaboration will continue with the Lithuanian tour of the South Korean Eclat Ensemble next year.

Having performed a programme of works by Kaaija Saariaho and two world premieres by Osvaldas Balakauskas and Rytis Mažulis at this year's Gaida Festival, the full Gaida Ensemble is bound for Melos-Ethos festival, Bratislava, where they will give repeat performances of Saariaho's Lichtbogen, Balakauskas' Arcade and Mažulis' Bézier Spline Canon together with two premieres by Slovak composers under Robertas Šervenikas on Nov. 11. 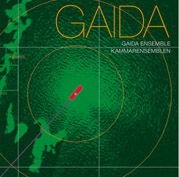