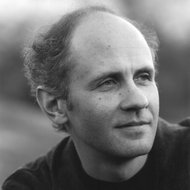 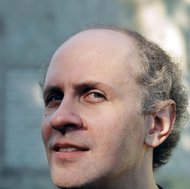 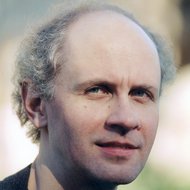 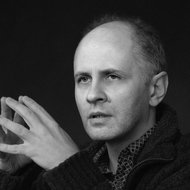 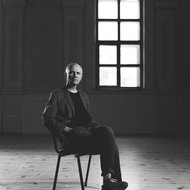 Šarūnas Nakas, a composer by calling and a cultural critic by necessity, earned a solid reputation as a 'transgressor' of accepted norms. In 1985 he wrote several of his most seminal works, planting some ideas and phenomena which have never taken root locally - Dada, Kurt Schwitters' Merz and futurism (Merz-machine, Vox-machine, Ricercars). Ten years later Nakas found himself fascinated the inspirations coming from various non-academic music worlds (jazz, improvisational and ethnic music), as well as to the aural impressions of everyday life (radio, MTV, street bustle, murmur of the water and the wind, bird songs, etc), first of all in the compositions Chronon, Fight and Escape, At Heaven's Door. Another important idea that has gripped Nakas' imagination in recent years is a kind of architectural approach to musical composition, beginning with graphic sketches of pitch structure, then piling blocks of different rhythmic patterns and putting them into separate uniform layers, kept together without any binder but by the sheer force of weight - just like in ancient pyramids, mausoleums or ziggurats (Ziqquratu, Aporia, Nude, Crown). Šarūnas Nakas: "My compositions could be compared, in some respects, to macro-systems, like lakes, oceans, rivers, nebulae, star clusters, or vast Northern landscapes: it makes no sense to single out individual sounds, motifs or episodes in my music, because changes occur here at a very slow and hardly perceptible pace."

Šarūnas Nakas (b. 1962) is a composer, essayist, conductor, performance and video art­ist, organiser of contemporary music festivals and presenter of radio programmes. As a composer, he was educated at the Lithuanian Academy of Music and Theatre, where he studied with Prof. Julius Juzeliūnas (graduating in 1986), and at the composition courses in Poland (1989–1991) and the IRCAM in Paris (1998). In 1982, he founded the Vilnius New Music Ensemble, with which he has toured in 15 European countries and Canada for eighteen consecutive years. In 2001, he wrote the first Lithuanian textbook on contemporary music. His works have garnered him several prizes at the Lithuanian Composers’ Union’s competitions (1996, 1998, 2002). His distinctions also include awards for programming of the festivals and introducing novelties into Lithuania’s musical life (1997, 2002), prizes for his writings (2003) and promotion of Lithuanian music (2005). In 2007, he was awarded the Lithuanian National Arts and Culture Prize.  In 2012, became a recipient of the Gabrielė Petkevičaitė-Bitė Memorial Medal "In Service of Lithuania" for his socially relevant writings.

Šarūnas Nakas is one of the most radical contemporary Lithuanian composers. Nakas links the concept of modern art with anti-romantic perception of form, sound, and space. What is important for Nakas is the freedom of ideas and the constructive order of their implementation. Many of Šarūnas Nakas’ works exhibit extraordinary sound mass, concentrated energy, and long-lasting tension. At times, his musical language approaches standards of hyper-complexity developed in the current decades.

Šarūnas Nakas’ works are constructed around diverse means of expression – from diatonic scales and natural harmonic series to microintervalic structures, from noises to birdsongs, from Indian rhythms to simultaneous sound of different music styles. The slow progress of static music thus be­comes thwarted with energetic gusts of intensity, the monotony is contrasted with ecstasy. Ebbs and flows of the abstract musical material seem to depend on an allegedly irrational logic that disguises structural manipulation.

The musicologist Rūta Goštautienė said about Nakas’ music: “Unlike his contemporaries who responded to the ex­pansion of digital technologies and the new musical revolution it entailed, Nakas did not turn towards non-academic music. In the age of digital explosion, his turn is in a way even more radical. What connects him to the new musical reality is his musical material per se, inspired by technological production and bearing traces of technological manipulation. The composer’s ‘digital imagination’ becomes embedded in sound even in the compositions for acoustic instruments – through specific rhythmic, dynamic and textural structuring, or by enhancing certain timbres. This post-technological sound vocabulary and structures derived from it resist meditation. But one can get immersed in the ocean of sound, overwhelmed by the monotony and grandeur of music.”

INTERVIEW. Šarūnas Nakas: A Maverick from the 'Peripheral Village'

Šarūnas Nakas: Preaching to the Barbarians

Šarūnas Nakas in Tune with the Global Frequencies