PERFORMERS’ SPOTLIGHT. Kaskados Piano Trio: Making Their Way Between the Classical and the Modern

Speaking of the local musical life of the past two decades, one of the most beneficial effects of Lithuania’s existence as an independent state (we are lucky to celebrate its 20th anniversary this year) is that it encouraged the emergence of the independent groups of musicians. They proved both flexible enough to survive constant economic exigencies, without the patronage of any existing institution, and ever adventurous in seeking out new repertoire. One of such freely associated Lithuanian ensembles is called the Kaskados Piano Trio.

The Trio was formed in 1997 by pianist Albina Šikšniūtė, violinist Rusnė Mataitytė and cellist Edmundas Kulikauskas. All three musicians received a solid classical training at the Moscow Tchaikovsky Conservatory and earned international renown for their superb performances of classical and romantic repertoire for piano trio. Besides the public acclaim, the most notable among their professional achievements is the first prize at the 9th International Johannes Brahms Competition in Pörtschach, Austria (2002).

But the very fact that the ensemble took its name from the series of piano pieces by Osvaldas Balakauskas, who is considered a guru among Lithuanian contemporary composers, points to another important area of their artistic interests. Contemporary music, and the work of Balakauskas in particular, are often added to the programmes of the Trio and its individual members, as a counterbalance to the classical staple repertoire, with some of the new pieces written especially for them. Together with pianist Margrit Julia Zimmermann, the Kaskados Trio recorded a portrait album of Balakauskas’ works released by the British ASV Records in 1999. Violinist Rusnė Mataitytė performs Balakauskas’ Sonata for violin and piano Like the Touch of a Sea Wave, Second Violin Sonata and Violin Concerto (of which she is a dedicatee) as part of her regular repertoire.

The members of the Kaskados Trio, both collectively and individually, also come into contact with contemporary music, both Lithuanian and foreign, through a variety of other collaborations. Rusnė Mataitytė and Edmundas Kulikauskas play with the Gaida Ensemble devoted solely to the performance of contemporary music. Edmundas Kulikauskas also performs most of the Lithuanian orchestral premieres with the Lithuanian National Symphony Orchestra as the leader of the cello section. Rusnė Mataitytė was a co-director (with Margrit Julia Zimmermann) of the Kaskados Festival in Kassel (Germany), while pianist Albina Šikšniūtė is a regular participant (from 1991) at the international festival Ost-West Musikfest (Austria), where she has performed numerous premieres of works by Austrian composers, both solo and as member of chamber ensembles.

The Kaskados Trio… developed its unique approach towards contemporary scores, rendering them with utmost technical precision and romantic sensitivity. This generates dynamic music-making, which encompasses both emotional intensity and convincing treatment of timbres and formal logic… The musicians of the Kaskados Trio willingly express their predilection for the romantic world perception and aesthetic.

Although the Trio usually mixes the classical and the modern in its concert programmes and recordings, its most recent album focuses on the works for piano trio written by various Lithuanian composers between 1999 and 2008 (Contemporary Composition Series). These works add to the ensemble’s collection of Lithuanian music for piano trio. Thanks to the creative initiatives and openness of the Kaskados Trio, the said collection contains works dedicated to the ensemble. These include Emmaus (2006) by Algirdas Martinaitis, based on a fragment from the Bible, and the post-minimal composition When the Footbridge Is Gone I Will Cross the River (2003) by Loreta Narvilaitė. The neoimpressionistic Moonlight (1999) by Jurgis Juozapaitis was also originally written for piano trio. The other works recorded on this CD are versions for piano trio specially arranged by their authors. Among these are Express No.3, or Glinka and Nemirovich-Danchenko on a Train Trip from St. Petersburg to Moscow (2008) for violin and piano by Vidmantas Bartulis, who remains faithful to the post-romantic trend; Stasys’ Eight Miniatures (2002) for flute, violin and viola by Bronius Kutavičius, the series of eight pieces inspired by the drawings of Lithuanian artist Stasys Eidrigevičius and available for performance in two more versions; Momenti sacri (2001) by Feliksas Bajoras – an abridged version of his Missa in musica, the instrumental parts of which create an illusion of a spoken prayer through the use of agogic nuances; and, finally, Song and Dance (2008) by Anatolijus Šenderovas, an abridged version of his David’s Song for cello and string quartet written for famous cellist David Geringas.

The works written during the past decade and recorded on this CD seem to represent different shades of so-called Baltic spiritualism. Binding all these seven pieces together are aural reflections of painful experiences and sometimes nostalgic moods, as well as characteristic post-minimalist tendencies. But on the other hand, performers do not seem to attempt at any kind of stylistic uniformity: works written in a post-minimalist vein are interspersed here with eloquent and pungent modernistic passages.

Striving to unlock and deliver the ‘message’ contained in each composition (in the presence of the living composers!), the musicians not only had to grasp different idioms and techniques developed by each composer, but also to fathom their intentions. What is more important to the listeners is that the Kaskados Trio managed to find an adequate key to the music of each individual composer, which is determined by the performers’ intuition, taste and professionalism.

for violin, cello and piano 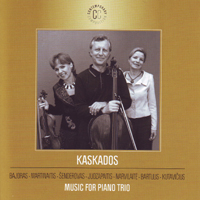