But a snapshot of the musical diversity burgeoning on Lithuanian new music scene, the latest promotional release in the "Zoom In" series gives an overview of the key developments of the year 2004: new works, events, names, themes and technologies, performers, festivals and commissions, which often prove stimulating in the emergence of novel creative ideas and their implementation. The six selected pieces, recorded, in most cases, during their premiere performances in different European venues, give a flavour of what is currently going on in Lithuanian academic music circles. For example, it shows the advancement of the up-and-coming generation of young composers (including Raminta Šerkšnytė, Vytautas V. Jurgutis, Vykintas Baltakas and Marius Baranauskas) whose complex avant-garde rhetoric co-exists with habitually strong post-neoromantic trend, which was most distinctly personalized in the music of Onutė Narbutaitė and Algirdas Martinaitis. The CD is for promotional use only and may be requested from the LMIPC by e-mailing to info@mic.lt

New CD series of the LMIPC

Thanks to the concerted effort of Lithuanian music researchers and performers, many prominent music figures have found their definite place in Lithuanian music history. The series of new recordings featuring the leading composers of the past are launched with an ambition to bring their music into the present-day focus and uncover exciting Lithuanian repertoire that has been unduly left in obscurity. An absolute must-have for Lithuanian music experts and a curiosity for those interested in Lithuanian music history, these recordings are generally meant to encourage subsequent performance, study, comparative analysis, reconstruction of contextual frameworks, and last but not least, to provide the pleasure of listening. 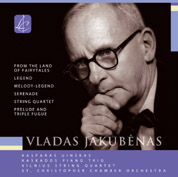 The first CD in the series, a compilation of works by Vladas Jakubėnas, covers two periods in the composer's career. Two miniatures for piano (1926-7), From the Land of Fairytales and Legend, composed while studying at the Riga Conservatory, are interesting examples of Lithuanian Romanticism and associate, if remotely, with piano works by Čiurlionis. The other three compositions are the result of probably the most prolific period in composer's life when he studied composition at the Staatliche Akademische Hochschule für Musik in Berlin with well-known German composer and conductor, Franz Schreker (1928-32). Melody-Legend for violin and piano (1930-1), String Quartet in A minor (1929-30) and Prelude and Triple Fugue in D minor for string orchestra (1928-9) ideally combine an acquired command of counterpoint, neo-classical features and the inevitably re-emerging romantic inspiration with a lovely folk aroma. His later period after returning to Kaunas is represented by a graceful Serenade for cello and piano (1936). 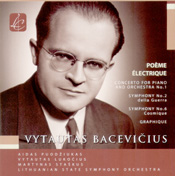 The second CD features some of the most idiomatic works by Vytautas Bacevičius (1905-1970). Although his oeuvre includes many valuable compositions for piano, it was his symphonic works that he considered "of sole and exclusive importance". Recorded on this CD are five most prominent Bacevičius' symphonic compositions from different periods of his life in Kaunas, Paris and the U.S. The artistic ebullience of interwar Paris lent an inspiration to Poème électrique (1932), his most renowned symphonic opus of constructivist spirit, which reflects young composer's fascination with the technological progress that was a fashion of the day. The earlier Concerto for piano and orchestra No. 1 (1929) presages similar motives, though the echoes of Scriabin, French impressionists and neo-folkloric elements are still Bacevičius' main stock in trade. Probably the most popular of his four finished piano concertos, it was given numerous performances in different European venues by the composer himself at the piano. For this CD it was recorded by young Lithuanian pianist Aidas Puodžiukas.

Symphony No. 2 della Guerra (1940) was written in the middle period of Bacevičius' creative career (a "period of compromise", as he put it), which evolved against the background of troubled years of World War II. Its second movement, the Mournful March, is among the most touching of its kind in Lithuanian music history.

Two last compositions exemplify Bacevičius' late and most idiosyncratic works – Symphony No.6 Cosmique (1960), and Graphique (1964). In these works (pre-eminently in Graphique), his cosmic idée fixe has taken shape of purest musical structures, determined by intense intellectual and spiritual exertion of the composer.

With the portrait CD of Jurgis Juozapaitis' works, "Tower Counterpoints", the Lithuanian Music Information and Publishing Centre introduces a new label, "Contemporary Composer". It is conceived as a series of portrait CDs, featuring Lithuania's foremost composers and their most outstanding works of recent years. 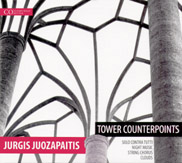 "Tower Counterpoints" is comprised of staple works by Jurgis Juozapaitis, for which he was awarded the National Arts and Culture Prize in 2002 and the 1st Prize at the "Sinfonia Baltica" International Composers' Competition in Riga in 2004 (specifically, for the title piece). Five works, written between 1996 and 2004, represent two major trends in his oeuvre. Clouds for clarinet and string orchestra and Night Music for string quartet belong to his atmospheric opuses, which convey the images and sounds of nature with an air of intimacy and mystery, and where the same mood is sustained throughout due to the uninterrupted musical development. Another group of works is in a more traditional mould. Solo contra tutti for violin and symphony orchestra, String Chorus for strings and Tower Counterpoints for orchestra are effective concertante pieces, characterized by drama, conflict and stylistic juxtapositions. These pieces are brilliant examples of the mainstream repertoire for orchestra.

The opening Treputė Martela (The Stomping Bride) by Vaclovas Augustinas is a wild, dancing celebration driven by relentless percussion and other instruments, including viola da gamba and recorders. Similar in their lively rhythmic character are pieces by Rytis Mažulis and - especially exciting - the Alleluia by Algirdas Martinaitis.
David Vernier, ClassicsToday.com