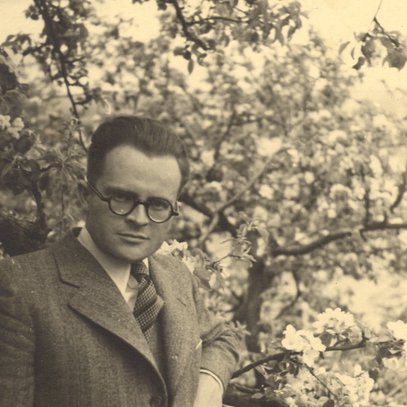 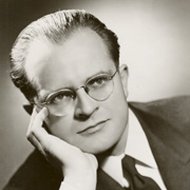 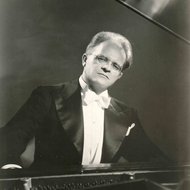 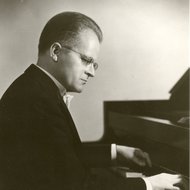 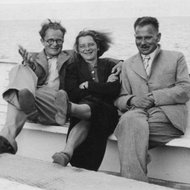 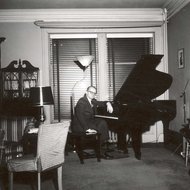 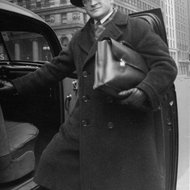 Vytautas Bacevičius (1905-1970), composer and pianist, exceptional personality in the Lithuanian music history, one of the first avant-garde composer of the interwar period. He "is the first Lithuanian composer, who leads towards contemporary European music culture", wrote another Lithuanian modernist Jeronimas Kačinskas in 1932. Vytautas Bacevičius' piano and symphonic music legacy is especially large and valuable, and, after Čiurlionis, takes a very special place in the Lithuanian music history.

Vytautas Bacevičius was born in Łódź (Poland) on September 9, 1905, in the family of well-known musicians. His father, Vincas Bacevičius (1875-1952), taught in Lodz, later (from 1925) in Kaunas, led student orchestras and choirs. Vytautas' brother, pianist Kęstutis Bacevičius (Kiejstut Bacewicz, 1904-1993), graduated from Warsaw Conservatoire and University, taught in Kaunas, Warsaw, and Lodz (in 1957-1969 he served as the rector of the higher music school in Lodz). Vytautas' and Kęstutis' sister, Polish composer and violinist Grażyna Bacewicz (1909-1969), received the biggest international recognition.

Vytautas Bacevičius' first guide in music was his father. Later Bacevičius studied composition under Kazimierz Sikorski and Kazimierz Wiłkomirski, and piano under Helena Kijeńska, Antoni Dobkiewicz and Józef Turczyński at the Łódź Conservatoire. After graduating from the Conservatoire in 1926, he studied at the Kaunas University. In 1927-1930 Bacevičius lived in Paris, where he studied philosophy at the Sorbonne University, and continued piano studies with Santi Riera. In 1928 he took an extern examinations at the Russian Conservatoire in Paris and earned the diploma in composition and piano. Upon return to Lithuania in 1931, Bacevičius taught at the Music School and later the Conservatoire in Kaunas. He advocated his aesthetic principles in "Muzika ir teatras" (Music and Theatre) magazine, which he himself edited and published in 1933 (3 issues).

In 1939 he went on concert tour to South America. After the outbreak of the WWII, Bacevičius settled in the USA in 1940. He taught at the New York and Brooklyn conservatoires, as well as Long Island Music Institute, wrote articles and gave lectures. In 1942 he established a private piano studio. Vytautas Bacevičius died in New York on January 15, 1970.

As a pianist Bacevičius performed in Europe (in 1928-1939 he gave over 300 concerts), South and North America. In 1938 he was a jury member at the International Ysaye Piano Competition in Belgium. After settling in the USA he made appearances in the most prestigious concert halls in New York including Carnegie Hall (7 recitals), Town Hall and Times Hall. Works by Liszt, Chopin, Scriabin, Debussy, Ravel, Ciurlionis, and his own compositions for piano were the staples of his concert repertoire.

Vytautas Bacevičius is credited for composing the first Lithuanian concerto for piano, and one of the first Lithuanian ballets. His early works, written during his study years, were still influenced by romanticism and impressionism. In 1927-1940, so called the "Lithuanian period", Bacevičius turned toward constructivist approach, often employing a principle of contrasting organisation of musical material. Works, composed during this period, show influence of expressionism ("Poème électrique"). At the time Bacevičius began working on "Words" (mot) - a new genre of instrumental chamber music, invented by the composer himself (composed seven pieces). During these productive years Bacevičius composed an opera, a ballet, 2 concertos for piano and orchestra, other symphonic works. After settling in the USA, in the thirties and forties his music became more moderate displaying neo-classical features (Sonata for piano No.3).

The fifties and sixties marked new so called "cosmic period". "Symphonie cosmique", "Graphique" for symphony orchestra, "Poème cosmique" for piano and "Rayons cosmiques" for organ are among his most significant works of this period. In his letters Bacevičius contemplated the unity between the idea of absolute music ("music itself is the essence") and cosmological nature of the process of music composition. He saw the idea of cosmic music as a universal music, a phenomenon that is elevated above the material world: "Music as a symbol of Supreme Mind reaches the nucleus and the springs of the Universe and in that it signifies the creator". Aiming to create incorporeal, immaterial music ("Poème cosmique" for piano, "Rayons cosmiques" for organ) the composer abandoned bar lines in his last opuses, while the notation of "Graphique" comes close to graphical scores.

Constructivism, kaleidoscopic organisation of musical material, asymmetry of form, constantly changing meters and tempi are characteristic of Vytautas Bacevičius' music. In many of his compositions he used extended tonality or atonality, the chords of stacked fourths, polyfunctional harmony. The composer described his music as expressionistically tonal, influenced by polyphonic style with pronounced features of constructivism.

A New Release by Naxos: The Music Of The ‘Promethean’ Vytautas Bacevičius