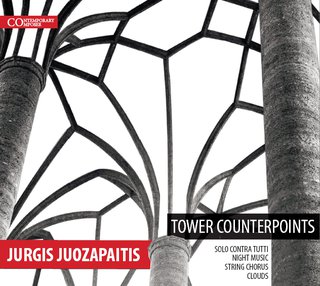 The CD features five pieces by Jurgis Juozapaitis, written between 1996 and 2004. They represent two major trends in his oeuvre: Clouds and Night Music belong to his natural-atmospheric opuses, while Solo contra tutti, String Chorus, Tower Counterpoints are concert pieces in a more traditional mould. The first group resembles of musical paintings woven of images or sounds of nature, conveying the air of privacy and mystery. Due to the uninterrupted musical development, these works or cycles sustain the same mood throughout. Drama and conflict coupled with stylistic variety and juxtapositions, characteristic of the other group, result in effective concert pieces. These belong to the mainstream of composing for contemporary orchestra.