zoom in 4: new music from Lithuania 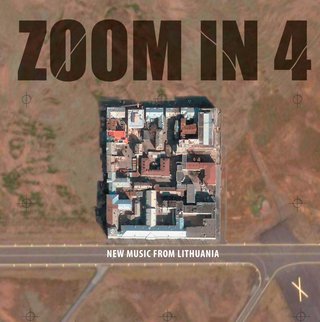 But a snapshot of the musical diversity burgeoning on Lithuanian new music scene, the fourth promotional release in the "Zoom In" series gives an overview of the key developments of the year 2004: new works, events, names, themes and technologies, performers, festivals and commissions, which often prove stimulating in the emergence of novel creative ideas and their implementation. The six selected pieces, recorded, in most cases, during their premiere performances in different European venues, give a flavour of what is currently going on in Lithuanian academic music circles. For example, it shows the advancement of the up-and-coming generation of young composers (including Raminta Šerkšnytė, Vytautas V. Jurgutis, Vykintas Baltakas and Marius Baranauskas) whose complex avant-garde rhetoric co-exists with habitually strong post-neoromantic trend, which was most distinctly personalized in the music of Onutė Narbutaitė and Algirdas Martinaitis. The CD is for promotional use only and may be requested from the LMIPC by e-mailing to [email protected]