Šarūnas Nakas is undoubtedly one of the most interesting figures in Lithuanian new music, active in many roles - as a composer, essayist, conductor, video artist, organiser of contemporary music festivals, author of radio programs and books. Whatever the field of the composer’s activity is, whatever role he might play (though all of them are strongly related), Šarūnas Nakas is always provoking, critical and intriguing.

However, it is composing that Šarūnas Nakas seems to regard as his most important and primary activity. The first composer’s portrait CD Nude includes his most unordinary, exciting works: Chronon for chamber ensemble (1997) - masterfully constructed musical abstractions of different movements; Nude for symphony orchestra (2004) - a ritual of pure sound allowing the listener to travel in space and time; Aporia for three chamber groups (2001), symbolizing three different sound worlds - natural, artificial and traditional, which sound simultaneously; and Crown for wind orchestra (2005), impressing with its powerful ‘soundscrapers’, monumental boulders of frozen sound. All these four compositions may arouse most diverse associations, fascinate or irritate the listener, but it is not the kind of music that passes by unnoticed.

Zoom in 5. New Music from Lithuania

The fifth Zoom In includes five most exciting orchestral compositions of 2005, five clearly individual creative strategies, related to and representing the latest trends of the Lithuanian music.

Dramatic minimalism of Bronius Kutavičius, having influenced entire generations of Lithuanian composers, is once again perfectly revealed in his latest symphonic composition Joys of Spring, based on the first part of the epic poem The Seasons by the 18th century Lithuanian literary classic Kristijonas Donelaitis. The extreme, anti-narrative trend, the rejection of most conventional attributes of composing, performance and perception of music is represented by Crown for wind orchestra by Šarūnas Nakas. The impressive ‘soundscrapers’, demanding huge physical efforts, are perfectly rendered by the Austrian wind orchestra Windkraft Tirol (conductor Kasper de Roo).

The CD also represents three very individual shapes of the Lithuanian (neo)romanticism: the theatrical, narrative, broadly fluctuating idiom is represented by several parts from a larger work by Algirdas Martinaitis, Sefer Zikaron (The Book of Memory), dedicated to the victims of Holocaust in Lithuania. Onutė Narbutaitė presents a different narrative in her symphonic composition La barca: abstract, and, at the same time, expressive, very textured and full of detail. The flicking trail of rising and disappearing musical imagery here is reminiscent of a ship in search of direction in the chaotic ocean of sound. The CD features the recording of the premiere performance at the Musica Viva concert series with the Bavarian Radio Symphony Orchestra (conductor José Serebrier). Raminta Šerkšnytė’s relationship with romanticism is proved not only by rather traditional orchestral writing, but also by her love for contrasts and dramatic tension present in most of her work. Mountains in the Mist is no exception; such tension here is mostly achieved through impressive dynamic and timbral constellations and oppositions.

The CD, revealing the strength and vitality of Lithuanian orchestral music, has been released in partnership with the Bavarian Radio Programme 4, Lithuanian National Radio and Television, Windkraft Tirol and Gaida Festival, and has been supported by the Lithuanian Culture and Sports Support Foundation. 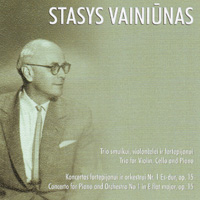 Trio for violin, cello and piano / Concerto for piano and orchestra No.1