In 2009, Lithuania celebrated the centenary of Stasys Vainiūnas, a composer and pianist, who left his distinct mark as one of the leading figures of the Lithuanian postwar music scene and developed an original musical idiom by blending late romanticism, impressionism and ethnic elements. During the year, a number of his most popular chamber, vocal and symphonic works have been performed at various concerts and several new and archival recordings of his music appeared, thus replenishing his rather scant discography. Vainiūnas had been active in different areas of the musical art, accumulating a bulk of frequently performed compositions: works for solo piano and chamber ensembles, symphonic pieces, several instrumental concerti, as well as a number of works for voice and organ.

Several factors have stimulated the spread of Vainiūnas’s music. Firstly, as a professional and active concert pianist Vainiūnas has made numerous solo and chamber appearances, oftentimes including his own works in his performances. Secondly, for the most part of his career, he had worked as a piano professor at the Lithuanian Academy of Music and Theatre and Head of the Piano Department, which made his piano and chamber works easily available for the students in his class and, subsequently, at other educational institutions. The viability of composer’s works was also fostered by his daughters, both active musicians – pianist Birutė Vainiūnaitė and violinist Audronė Vainiūnaitė. Thirdly, in 1965, the Stasys Vainiūnas Piano Competition was founded, which has been held every two years ever since, always including compulsory pieces by Vainiūnas in its programmes. In 1993, this competition has become international and, in 2006, it was supplemented with the chamber ensemble category. To sum up, it appears that the active role of performers and the very character of his music were highly conducive to the spread of Vainiūnas’s music, at least in his home country.

On the other hand, his artistic personality matured against the backdrop of changing ideological and stylistic contexts. He wrote his first significant opus – Little Insect Suite for piano – in 1940, a year marking the turning point in the political life of Lithuania: first Soviet occupation, then German occupation (during WWII) and later the second Soviet occupation in 1944. The creative career of Stasys Vainiūnas thus developed under the occupation conditions. Very soon however, he was to turn from a composer with yet insignificant creative experience into one of the key figures of the music stage in post-war Lithuania. The postwar years coincided with yet another important turning point in his life – his performing activity became gradually overshadowed with composing, which resulted in the series of large-scale works.

It has become a tradition in Lithuania to relate Stasys Vainiūnas to two of his contemporaries – Balys Dvarionas (1904–1972) and Antanas Račiūnas (1905–1984). However different in their workflow momentum, value orientations and genre priorities, they have often been grouped together and referred to as DvaRaVa at the time.

In 1944, upon the beginning of the second Soviet occupation, the situation of Lithuanian artists, as well as the overall stylistic and social context of musical art, have changed significantly. Poor health and accusations of formalism have undermined the creative powers of Juozas Gruodis (he died in 1948) – one of the most authoritative figures of the time, the graduate of the Leipzig conservatory and the founding father of the Lithuanian school of professional composers. Stasys Šimkus (1887–1943), a composer who developed the line of national romanticism, had passed away in the war years. So did also Jurgis Karnavičius (1884–1941) who maintained this line in the opera genre. Composers of more modern inclinations, among them Vytautas Bacevičius, Jeronimas Kačinskas, Julius Gaidelis and Vladas Jakubėnas, have emigrated to the West. The Soviet occupation has disrupted the natural process of the development of Lithuanian music and in the face of changes new leaders have emerged: Gruodis’s student Antanas Račiūnas, who debuted in the thirties with the series of large-scale works (operas, symphonic pieces, etc.); Balys Dvarionas – an already recognised pianist and conductor, occasionally trying his hand at composing; and a pianist, organist and composer Stasys Vainiūnas – a Lithuanian from Riga and a graduate of the Riga Conservatory, who had lived in the capital of Latvia until 1938.

After moving to Lithuania, Vainiūnas began working as a piano teacher, although he was already recognised as a piano virtuoso at the time. He earned his name by giving recitals in Latvia and Lithuania and appearing in concerts and competitions elsewhere: in 1933, he became a prizewinner at the International Voice and Piano competition in Vienna and went on a state scholarship to study piano at the Vienna Music Academy with Emil von Sauer from 1935 to 1936.

Therefore, the aesthetic and artistic taste of the young Vainiūnas formed in the musical atmosphere of the two cultural centres – Riga and Vienna. It was further shaped by the piano repertoire he performed, including a significant number of pieces by romantic and impressionist composers. All these experiences have nurtured and ripened Vainiūnas’s artistic personality, making his music always sound au fait, dignified, untouched by sentimentality or excessive sensuality and free from the slightest shadow of any literary program content. He never consciously employed any modern technique of composing, but his unruffled music often suggests the experience of a cosmopolitan urban dweller rather than that of a rural fellow. All this has been evidenced by his consistently evolving style, the elaborate musical language and his spiritual experience contemplated through the musical forms. In this respect, especially noteworthy are his late works distinguished for dramatic and painful character.

As mentioned above, Vainiūnas set out on the path of composing in 1940, with his Little Insect Suite. The first wave of creative intensity, when his creative activity obviously overshadowed that of the pianist, coincided with the grim reality of postwar Lithuania, the artistic life of which became dominated by the style of socialist realism as a result of the Soviet propaganda, demanding optimistic pathos and romantic music based on folk songs. “Party, people, mass” were declared key guidelines of the official art.

At that time, Vainiūnas penned down three consecutive large-scale scores of the Piano Trio (1945), the First Piano Concerto (1945) and Rhapsody for two pianos and orchestra (1947), which betray stylistic inconsistency, stereotyped romantic idiom and textural patterns, along with numerous quotations of Lithuanian folk songs. Despite all that, the instant success of these compositions (the first public performances of these works were favourably received by both the audience and the critics) was soon clouded: as the Soviet ideological dictate stroke roots, the composers were heaped with reproaches, accusing them of being too formal and overly intellectual. Vainiūnas was mostly blamed for his Rhapsody – a piece representative of Vainiūnas’s personal style, bearing distinct national character in the repeated patterns of dissonant polyphonic textures (suggestive of the sutartinės, with which Vainiūnas became fascinated until the end of his days).

This accusation determined the fate of other abovementioned works as well. Only the Trio was to be performed more frequently while the Piano Concerto and the Rhapsody have been banned from the concert life for long. In the early 1950s, when the skies have brightened up a bit and the tension was eased, Vainiūnas’s music won recognition once again, although it was still said to contain certain “sinister tendencies,” such as the lack of heroism and an excessive admiration of the sutartinės. During this dramatic period, the composer nevertheless remained true to his creative principles. Under the ideological pressure, he retained his dignity and only went for small compromises, while the style of his music evolved throughout his life, gradually revealing the contours of his unique style and way of writing. His instrumental works may serve here as a perfect example. Vainiūnas did not write much vocal music, so it was not that hard for him to evade the ideologically engaged themes and the shallow musical language they dictated.

The piano timbre is clearly predominant in the musical heritage of Stasys Vainiūnas: this becomes evident at the very first glance when perusing his list of compositions, in which four piano concerti, pieces and series for piano solo, two piano quintets and the Music for two pianos and string quartet occupy the most substantial place. His individual style has been touched by the neo-romantic and impressionist trends, interacting with the Lithuanian musical folklore. Although the composer never consistently used the modern composing techniques of the 20th century, he was not against musical novelties and was always well-informed about the latest developments in his craft. Rhythmic and harmonic invention plays a central role in his work. His late opuses display the extended (twelve-tone) tonality, polyharmonic and other complex interval and chord structures, as well as the elements of modal or sonoristic styles. Stasys Vainiūnas has retained consistency throughout his creative career, therefore his music is always recognisable as it is based on firm structural principles and a set of common features, including the echoes of the sutartinės, the striking rhythmic pulse formed by irregular accents and the improvisational character. 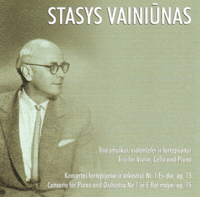 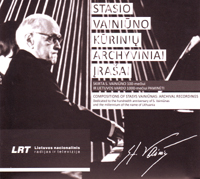 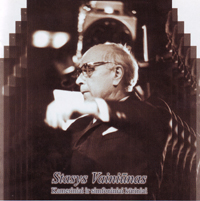 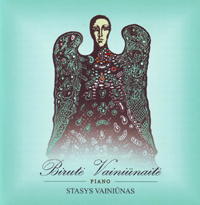