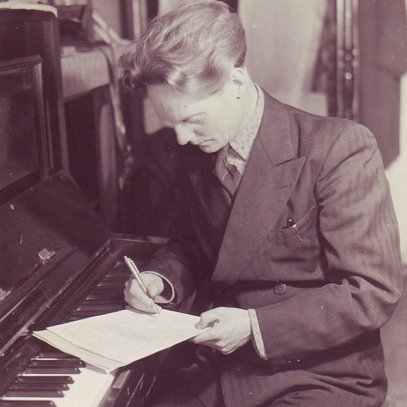 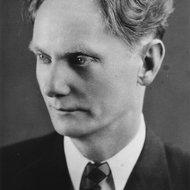 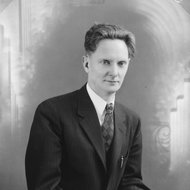 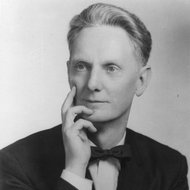 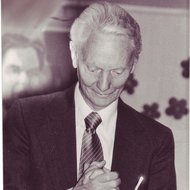 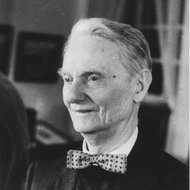 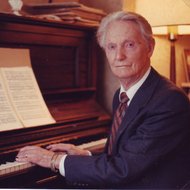 The composer and conductor Jeronimas Kačinskas (1907-2005) is considered to be one of the most prominent modernists in the interwar Lithuania, who emphasised the importance of intuition and individuality. In Prague he studied under Alois Hába, from whom he acquired the idea of microtonal and athematic music: nothing in nature and the human life is recurrent, therefore music has also to be written according to the principles of non-recurrence. In Lithuania Kačinskas wrote microtonal works and established the classes of microtonal music in Kaunas and Klaipėda, however, all of his microtonal works were lost during the World War II. In 1938 the Convention of the International Society of Contemporary Music (ISCM) in London highly appreciated Kačinskas' Nonet, which was compared to the music of Béla Bartók. After emigration to the USA, Kačinskas mostly wrote religious music, worked as a conductor and a pedagogue.

Jeronimas Kačinskas (1907-2005), a classic of Lithuanian modernism, was surprising in the scale of his avant-gardism during the 1930s. In the fairly conservative milieu of that time, he was noted not only for his microtonal and atonal athematic compositions. In discussing questions of national music, the composer sought to expand the traditional concept of Lithuanian art based on recreating the folk models, and to bring attention to the intuition and individuality of the artist.

Kačinskas began to study music with his father, an organist, at the age of six. Unfortunately, the disturbances of the period and the barely developing system of musical training created obstacles to a consistent ongoing education. With the onset of the First World War, the family moved to Russia. After returning to his homeland in 1919, Kačinskas studied independently, and was then accepted to study piano, viola, composition and pedagogy at the music school in Klaipėda, and for one year - in Kaunas. Having acquired the basics of classical composition, Kačinskas became interested in modern works, and wrote his first songs, which were "full of unusual combinations".

In 1929 he entered Jaroslav Krička's composition class at the Prague Conservatoire, and studied conducting with Pavel Dedecek and Method Dolezil. Here Kačinskas also successfully completed Alois Haba's class of quarter tone composition, and made his mark as one of the professor's most talented students. He wrote freely and with little effort, using newly learned principles of composing in microtones and an athematic form. Haba considered his Second String Quartet, and Concerto for Trumpet and Orchestra the most interesting of his early compositions. Unfortunately, these scores no longer exist.

The composer was able to implement few of his ideas after returning to Lithuania in 1931. Since classes of quarter tone composition did not catch on, Kačinskas was forced to take up a variety of jobs, including publication of the monthly "Muzikos barai". Although his compositions were limited in number, Jeronimas Kačinskas was expressing himself as a "courageous author who disregards technical difficulties". His Nonet for string and wind ensemble "defied routine", and became practically his best known composition. In his biography, 1936 was an exceptionally decisive year: "Despite the uneasy times, this period represents my greatest breakthrough into the music world at large: I and several other Lithuanian musicians were accepted into the International Society for Contemporary Music (SIMC)". Nonet was chosen for the Society's 1938 festival programme in London, and was performed "with exceptional accuracy and feeling" by Czech musicians at the BBC Radio Concert Hall. After the performance, the author of this "exclusive work" was congratulated by composers from various countries - including Béla Bartók.

Until the Second World War, Jeronimas Kačinskas worked with the Kaunas Radio and Vilnius Philharmonic as well as Opera orchestras, and was one of those rare conductors to conduct from memory. Not only well-known classical, but all symphonic music written by Lithuanian composers was performed in over one thousand of his conducted concerts. Kačinskas ended up on the Communist blacklists, and emigrated in 1944 after refusing to write a cantata about Stalin; he spent time in Lithuanian refugee camps in the Czech Republic, and later in Bavaria. Nearly all of the compositions he had written thus far disappeared during the war.

In 1949 Kačinskas moved to Boston, where he worked until 1995 at the St. Peter's Church of the Lithuanian community. Starting in 1952, he conducted a great many orchestras and choirs, including in such famous venues as Carnegie Hall. Notable among the several dozen religious compositions which he wrote while living in the USA, is Missa in Honorem Immaculati Cordis Beatae Mariae Virginis (1951), dedicated to the 700th anniversary of the baptism of Lithuania's King Mindaugas. The composer taught at the Berklee College of Music during 1967-86. His opera, "Juodas laivas" (Black Ship), was staged by the Chicago Lithuanian Opera in 1976.

Jeronimas Kačinskas visited his homeland after many years - in 1991. His work was finally acknowledged, and many of his songs and religious compositions were performed at that time. In 1992, the composer was awarded the Lithuanian National Award.