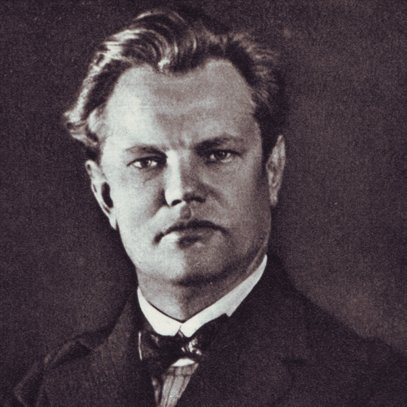 Juozas Gruodis (1884-1948) was the most significant figure in the interwar Lithuania. He was the first Lithuanian composer to regularly write symphonic music, in which he continued the rich tradition of the late programmatic romanticism. Even though he served as a local church organist until he was thirty, he later studied at the conservatories in Moscow and Leipzig, and when he came back to Kaunas, he acted as a conductor at the National Opera and in 1933 established the Kaunas Conservatoire - the first university-level music school in Lithuania, became its director and the first professor of composition. Gruodis was greatly interested in the old Lithuanian folk music - the monodies and the polyphonic sutartinės, often made their arrangements, and eventually developed his own individual style merging moderate modernism and elements of Lithuanian folk music, in its aesthetic principles similar to that of Béla Bartók and Leoš Janáček. Gruodis' attitudes were a strong influence for many Lithuanian composers for a long time.

Song of the Sea, from the ballet Jūratė and Kastytis

X
Song of the Sea, from the ballet Jūratė and Kastytis

Juozas Gruodis (1884–1948) is one of the most distinctive Lithuanian composers of his generation, leading composition teacher, and founder of the Lithuanian composition school. The distinguished classic formulated a vision of national music, close to many other European nations: it was in fact during Gruodis' time that the combination of folk music elements and modern composition techniques became a tradition - one, which, in the process of changing from its 19th century prototype, was actualized and interpreted from generation to generation in a variety of ways.

Juozas Gruodis embarked on his creative path with occasional private lessons, several months at the Rokiškis Music School, and independent self-teaching. He was playing organ at the age of 14, and started composing at the age of 15. Later Gruodis took private harmony lessons with Nikolay Ladukhin, and polyphony with Alexander Ilyinski. In the autumn of 1915 he entered the Moscow Conservatoire. The onset of the First World War, as well as his own declining health prolonged his education for some time. In that period, the young composer wrote "It Is So Quiet All Around" and "Spells", songs which became extremely popular. Though Gruodis' list of works was later supplemented by other genres, it was his vocal music that performers and publishers were particularly drawn to.

In 1920, Juozas Gruodis began a four-year course in composition at the Leipzig Conservatoire; his teachers included Stephan Krehl, Paul Graener, Sigfrid Karg-Elert. It was in Germany that the composer developed his national romantic style. Juozas Gruodis returned to the conservative environment of Lithuanian musical life in 1924. He worked for three years as second conductor at the State Theatre in Kaunas, and joined in organizing national Song Festivals. His "Symphonic Prologue" (1923), an example of extreme modernism, provoked much heated debate in Kaunas.

The composer's rise in fame in 1927 was accompanied by assignation to the post of director of the Kaunas Music School, re-organized into a conservatoire in 1933. He also taught composition theory, and based his teaching program on the model of the St. Petersburg Conservatoire, as it was formed at the beginning of the century. Gruodis became a prominent authority during the inter-war years: in 1930 he was chosen honorary member of the Latvian, and in 1932, of the Helsinki conservatoires. From 1945 until his death in 1948, he was head of the theory and composition department.

The last three years of Gruodis' life were filled with the ideological realities of occupied Lithuania. The composer was awarded for his "celebrated merits, pedagogical activities, and valiant work in the great war of the homeland", and was selected for the Kaunas "working people's council of deputies", as well as for the union of art workers and the "soviet composers' organizational committee". At the same time, his instrumental compositions were being strongly criticized for their undesirable "formalistic" elements.

Public affairs and responsibilities were an obstacle to the composer's intensive work. Gruodis was accustomed to working very slowly and strenuously on his scores. Though always envisioning large scale compositions, and one of the first composers to write the original Lithuanian sonata, suite, and ballet ("Jūrate and Kastytis", based on a national legend, and staged at the Kaunas State Theatre in 1933), Juozas Gruodis is above all interesting as a master of the miniature. His legacy includes approximately 60 works for piano, 40 harmonized folk songs, 25 original compositions for choir, and 22 songs for voice and piano. Notable among these are: "Poppies" (1921), "Cornflowers" (1921), the distinctively expressive "Spring Night in Berlin" (1921), and the subtle "Lilacs" (1945) - songs which undoubtedly are among the golden treasures of Lithuanian music.

Besides the aforementioned one-act ballet and music for theatre, Gruodis also wrote five compositions for symphony orchestra, in the tradition of a national romantic style. His symphonic poem "Dance of Life", composed in 1928, dispels the myth about the melancholic spirit of Lithuanian music.