Theatres and concert halls. What parallels can we draw between the activities taking place at either places? Can the role of music interpreters, with their boldness of subjective imagination and ‘co-authoring’ pursuits, be compared with creative aspirations of contemporary theatre directors?

Almost half a century separates us from the heresies of Glenn Gould, in his interpretations of keyboard music by Bach, Mozart and Beethoven. Even today it would still be unthinkable to hear the Appassionata performed on stage the way this pianist approached it. By the way, it was only at the recording studio, where Gould came closer to such manifestoes of the  interpreter’s privilege to unrestrained subjectivism. How would Beethoven react to them? And the paraphrases of Anton Chekhov’s dramas by theatre directors have gone even further. The vision developed by some staging director here becomes more important than the literary text for both actors and the viewers.

This tendency is significantly more moderate at concert halls. The vivid imagination of a resourceful interpreter most often accommodates to the fairly stable norms of rendering the classical texts and finds a fairly large variety of ways to communicate with the listener without transgressing the established limitations. If we were to look for parallels with modern theatre, we would most likely find them in some interpretations of contemporary music. And this is where the individuality of cellist Mindaugas Bačkus reveals itself in all its impressive versatility.

My interest in the CD Pas de deux was encouraged by his interpretation of the late music by Liszt. It was during the concert at the Philharmonic Hall that I thought of how Mindaugas, together with pianist Daumantas Kirilauskas, transform that music into a live and highly suggestive sound theatre (while the pieces are slow and meditative). I immediately recalled the premiere of Pas de deux by Onutė Narbutaitė in Vilnius Town Hall in 2006 (with Mindaugas Bačkus and singer Nora Petročenko as its first performers). A thoughtfully prepared interpretation? Definitely yes, but such definition is heightened to a different level by an emotional (though not ‘open-hearted’) vision and creative power of Mindaugas acting as a director of this staging. “That’s it”!

The moment I picked the new CD, containing duos by very different authors and featuring the cellist’s partners playing different instruments, I had the feeling that this is going to be the ‘theatrical miniatures’ by Mindaugas Bačkus.

The assumption proved right. The cellist easily steers his music-making energy to achieve an impressive variety in articulation, progression and dynamics (expanses of adagio sections, intense fast tempo currents, etc.). By picking ten miniatures he presents (each time differently) an unexpected approach to the nature of duo and the extent of its expressive possibilities. What is it? Subjective self-expression or the ardour arising out of devotion to music? Let us presume that the lead is taken by the devotee, the one who is able to properly alter and sublimate the contribution of an egocentric, to make it positive and, therefore, highly valuable as such.

With confidence in the composers, Mindaugas touches intuitively and yet perceptively upon the points most favourable for this highly original ‘sound theatre,’ thus creating daring and conceptual duo treatments. They are often coloured with rich sonorities, directing the listeners’ imagination towards the ‘arguable peripheral provinces’ of late romanticism and expressionism.

The sequence of duos begins with Jurgita Mieželytė’s The Bridge for reciter and cello – like a quintessence of theatricality heard in the text by Franz Kafka. Here it reminds of the prologue to the ‘sound play,’ which promises further versions of the linkage between music and theatre. The next piece, Horizon in Vertical by Arvydas Malcys (clarinet becomes the partner for this duo), continues – perhaps, unexpectedly to the composer – a contemplation of the Bridge drama and thus keeps the promise of the ‘prologue.’ When listening attentively to Narbutaitė’s Pas de deux it becomes clear that the composer, by responding to the tradition so subjectively, enters the deep layers of spiritual existence, where she discovers both the idea of innovative work and its implications. Joep Straesser balances the ‘leading’ instrument with the tenor recorder, referring to the four sections of his Duplum as the stages of searching for the concord between partners. Through the duo of viola da gamba and cello in his piece Altarium misericordiae, Algirdas Martinaitis contemplates the thoughts from the diary of the Saint from Vilnius, Faustina Kowalska. It gives a clear sense of the original situations, points of departure and vivid musical gestures, which help situate the listener’s field of associations. Everything connects logically, everywhere the sequence of cause and effect is felt, which shows relationship to something that has occurred already. Along with another partner of the main character, the double-bass, Martinaitis’ contemplations of the sacred give stage, somewhat unexpectedly, to the Renaissance dance visions by Karl Heinz Wahren, in his Nächtliche Tänze toscanischer Jungfrauen in florentinischen Gärten zur Blütezeit der Inquisition. The Dream Garden by Mikhail Bronner concludes the entire sound spectacle with an ‘epilogue’ fading in the twilight (in this antipode to the ‘prologue’ the cello is joined by the accordion).

Hence, this CD shall be perceived as a chamber theatre of a well thought-out drama; a peg to hang some thoughts about the role of the interpreter in creating the musical feast and engaging the listener into the adventures of the sound reality. 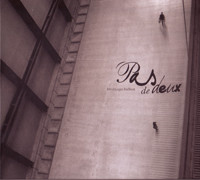