The 50th Warsaw Autumn festival presented the world premiere of the symphonic piece riva fiume sinfonia, the festival’s commission composed by Onutė Narbutaitė, as well as a recital by the Rūta and Zbignevas Ibelhauptas piano duo, which showcased works by the festivals’ favourites–Bronius Kutavičius and Osvaldas Balakauskas.

The Myth of the Warsaw Autumn 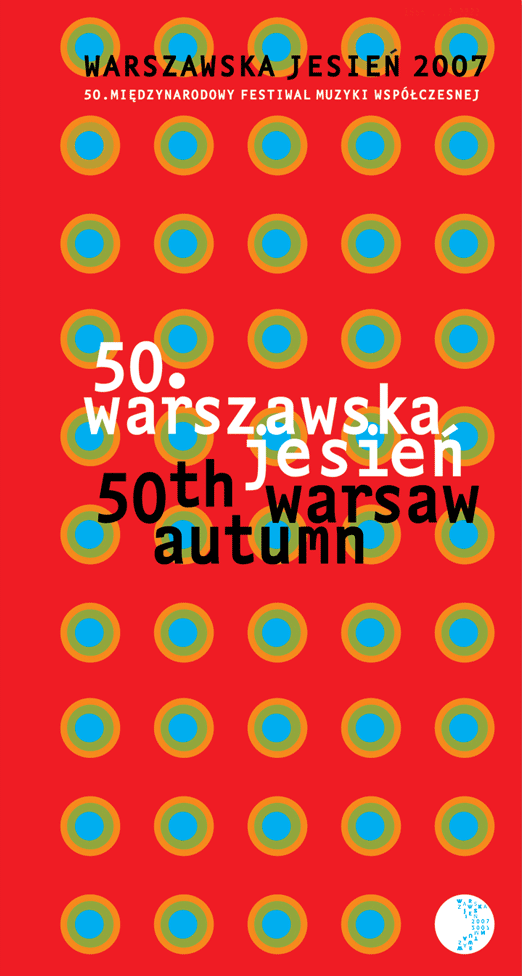 For many years, the Warsaw Autumn festival was a fairly mythologized phenomenon within the context of Lithuanian music. Metaphors like “the window to the world”, “the bridge between the East and the West”, “the island of freedom” and the like were commonly used to describe its liberal atmosphere. The festival enjoyed a unique position during the Soviet years: it had a monopoly on international contemporary music events in the region and thrived on generous subsidies from the local government (willing to pass for a liberal one), keeping its programs practically free of Socialist Realism. Held every autumn in possibly the nearest metropolis to Vilnius, the festival featured works by Schönberg, Berg, Webern, Varèse and Stravinsky, as well as the latest news in Western avant-garde–Boulez, Nono, Dallapiccola, Maderna, Cage, Feldman and the like. Western composers, lured by a rare opportunity to see what went on behind the iron curtain, attended the festival without much deliberation. Apart from the fascinating aura of intimate connection with the leading fi gures of contemporary music, the festival has continually rewarded its audiences with the most detailed textual and audio documentation (discs containing recordings of the concerts usually appeared as soon as the next day after the concert!).

The influences coming from the Warsaw Autumn festival had defi nitely instigated the modernisation of Lithuanian music in the second half of the 1960s. Fashionable composition techniques (such as serialism, aleatory, collage and early electronic music) were introduced in Lithuanian music, though the spark of such ‘mimetic’ avant-gardism faded rather quickly, in the beginning of the 1970s. There were, however, works, techniques and personalities that left an indelible trace and a lasting impact on Lithuanian music. The most notable among these were Witold Lutosławski and his own brand of twelve-tone music, along with his original concept of controlled aleatory, harmonic and temporal techniques and its specific notation, and Krzysztof Penderecki’s extended instrumental techniques, tone clusters and sound mass, commonly labelled as sonorism within the region. Every season, the Lithuanians coming back from the Warsaw Autumn brought fresh impressions and ideas with them. Their impact has not been widely researched yet, and thus we may only hypothesize that the ‘otherness’ of Lithuanian music, as compared to the music of Latvia or Estonia, is partly a result of the influence of Polish music, Warsaw Autumn festivals and other related events.

Lithuanian Music at the Warsaw Autumn

The detailed brochures, published annually by the Warsaw Autumn festival, keep track of its long history and various contacts with Lithuanian music and musicians–from the fairly official appearances of the Lithuanian String Quartet (1965) and the Lithuanian Chamber Orchestra (1971, 1978), sanctioned by the Soviet authorities, to the more recent history of premieres and performances, which began in the late 1980s and continues to this day as free cooperation of creative personalities and musical communities.

The Warsaw Autumn’s first commissions of new works by Lithuanian composers came in 1987. Bronius Kutavičius then composed Die stille Stadt, a piece for soprano and piano (in memory of Karol Szymanowski) quite atypical for him, set to German text by Richard Dehmel, while Osvaldas Balakauskas wrote his Tyla. Le Silence for four soloists and chamber orchestra, based on text by Oscar Milosz and sung in Lithuanian and French. From then on, the works by Lithuanian composers were included in the festival’s programs nearly every year: the Warsaw Autumn continually paid attention to the historically, geographically and mentally close periphery, thus confi rming its status of a contemporary music centre at the same time.

It is therefore quite symptomatic that the organisers of the festival remained fixed on the exotic minimalism of Bronius Kutavičius (despite the fact American minimalism has never been favoured by the festival). Over the years, the Warsaw Autumn has featured nearly all of his famous oratorios, as well as symphonic and chamber works. Another frequent guest of the festival is Osvaldas Balakauskas. Certain creative and personal characteristics made him appear to be a kindred spirit of Witold Lutosławski, the guru of Polish modern music: it was none other than Balakauskas who composed Meridionale in response to the festival’s commission to write a homage to Lutosławski in 1994. The process of restitution that the festival was going through in the late 1970s and early 1980s also brought Vytautas Bacevičius, the expatriate composer of Lithuanian-Polish descent and brother of the famous Polish composer Grażyna Bacewicz, back into public attention. Two of his major works–Poème electrique and Sixth Symphony–were performed at the Warsaw Autumn 1993 by the Lithuanian State Symphony Orchestra under Gintaras Rinkevičius.

Participation in the Warsaw Autumn festival is also mentioned in the biographies of many other Lithuanian composers (such as Feliksas Bajoras, Vidmantas Bartulis, Algirdas Martinaitis, Onutė Narbutaitė and others) and performers. Besides the appearances of the Lithuanian String Quartet, Lithuanian Chamber Orchestra (under conductors Saulius Sondeckis and Juozas Domarkas), and Lithuanian State Symphony Orchestra (under Gintaras Rinkevičius), a memorable recital was given in 1997 by the ensemble Ex tempore / Saga Duo. Lithuanian performers, however, were not frequent guests at the Warsaw Autumn, and premieres / performances of pieces by Lithuanian composers were commonly entrusted to Polish musicians. Interestingly enough, in spite of the multilevel communication between Lithuanian and Polish musicians, the range of Warsaw Autumn’s selections of Lithuanian music remains relatively narrow.

The 50th Warsaw Autumn remains true to its traditions: the festival’s program included pianists Rūta and Zbignevas Ibelhauptas, who played Osvaldas Balakauskas’ Movimenti II (2007) and Bronius Kutavičius’ Debate with a Stranger (1982), both works composed for two pianos and tape. However, probably the most solid Lithuanian accent in this year’s program was the symphonic piece riva fiume sinfonia, composed by Onutė Narbutaitė at the commission of the festival, performed on 25th September by Sinfonia Varsovia under Christopher Lyndon-Gee.

It is no coincidence that Onutė Narbutaitė was commissioned to compose a work for the anniversary festival: Polish musicians highly value the creative individuality of the composer and her tight relationship with both European and Lithuanian cultural tradition, non-hermetic language and radiating natural beauty of her music (Andrzej Chłopecki).

Onutė Narbutaitė: “I received a commission for a 20 minutes long musical piece, but did not feel like writing a single-movement composition, thinking of a symphony-like piece instead.” The composer did not want to title the composition just Fourth Symphony and came up with a more metaphorical title. “In contemporary music, the imitation of diverse natural phenomena has become especially typical; however, in this piece both the river and the shore are more of poetic and mythical concepts. I had in mind the mythical Styx or Lethe – a certain metaphorical situation of a human being. Still, the music is indeed fairly fluid, separate images seem to dive out of each other and different sections flow out of each other.”

According to the composer, the new piece has the characteristics of a classical symphony, where separate sections differ as contrasting images. Like most works by Onutė Narbutaitė, this piece is characterized by a clear idea and proportional form: three different moods and structural sections are clearly distinguishable, each of the latter being twice shorter than the preceding one.

Onutė Narbutaitė: “The major part of the work (extending to more than half of the entire duration) indeed resembles a symphony–it is more energetic, dynamic, possessing certain symphonism. I associate it with space, intensity, sense of freedom. At times it resembles a weightless flight, and at times a powerful dream with ‘fl ags and swords’.

The middle section is very much chamber-like, as if single instruments secluded themselves and became increasingly lonely–I would say it is highly introspective. Here an utterly different texture prevails – delicate, fragile, with a different sound resembling that of a chamber ensemble. This part is heartfelt; it was composed with an extreme concentration, when the technique to be used was no longer important. Although its duration is shorter, this part of the piece is of greatest importance to me. It is like a silent climax before the conclusion. A lonely soul’s journey to a different shore.

The closing section resembles a coda, with a lot of brass and low tones. Frankly speaking, I initially planned a more abstract end, which would probably be more appealing to fans of abstract contemporary music (well, there is always plenty of time for discussion when you write). However, as one teacher at the conservatory used to say, “Spanish motifs have crept in against the will of the composer.” That is how I produced the third moving in halftones, originating in the opening section, and a slight involuntary reference to Bach appeared in the end. I took the liberty to leave it in.”

The new symphonic opus is not only a permanent discussion with various ‘canons of good manners’ of the present-day music and a dialogue with the symphonic music tradition, but also an augmentation and continuation of the composer’s own symphonic writing experience. In her Second Symphony (2001), the composer daringly used elaborate romantic gestures, clearly expressed tonality and more vivid melodies, while the piece La Barca (2005) is much more dissonant, possessing a highly differentiated and fragile textures, cold timbres and melodies that appear to be scattered and failing to form more apparent rhetorics. How is the new work different?

Onutė Narbutaitė: “In comparison to La Barca, the new piece is very light in colour; it has many augmented triads, bright harmonies and high registers. In particular, the opening section contains many contrasts between bold unisons and complicated harmonic episodes, textural condensations. La Barca does not have a particular melodic development, while the new piece has it, even though much more abstract than in the Second Symphony, which makes it much more connected to my earlier works. Tonal harmonies are also quite visible here, but there are also many more chromatic movements, glissandi, etc. Of course, it is not exactly new in contemporary music, but I have attempted to obtain new harmonic progressions by matching them to a specific harmony. There are many strings sounding in the piece, but they are not too romantic and expressive, and the second section is based on solo oboe and bassoon parts. After a long while I have brought the piano back in the orchestra, which is mostly used for chromatic effect and sounds close to a percussive instrument. By the way, the percussion instruments play a significantly less prominent role in this work.”

This, just like many other symphonic scores by Onutė Narbutaitė, resembles a very detailed graphic artwork–separate instrumental parts are highly differentiated and nuanced, abundant with dynamic and other articulation signs. These textures’ flexibility and rhythmic waywardness, dynamic flickering and shading come to life only in the arms of attentive performers capable of reading and conveying the nuances of this music without losing the sense of the whole.

The composer dedicated the opus to her “severely ill, but remarkably strong Mother. Sadly, she will never hear it.” The new piece soon will receive its Lithuanian premiere by the Lithuanian State Symphony Orchestra, under the baton of the Swedish conductor B Tommy Andersson, at the opening concert of the Gaida Festival.