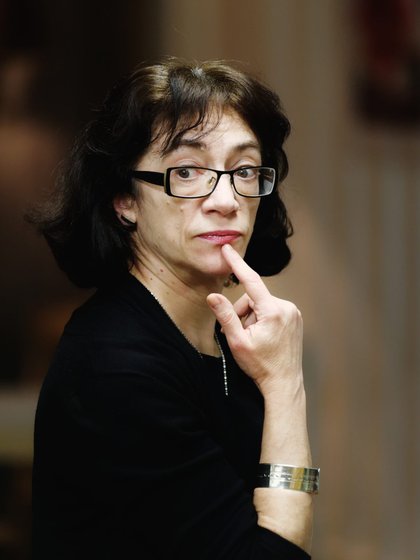 Photo: Martynas Aleksa
The premiere of Onutė Narbutaitė’s composition kein gestern, kein morgen (no yesterday, no tomorrow) at the recent Gaida festival reflects her creative ‘today’. And that ‘today’ on the eve of her anniversary to be celebrated next year is going to be far from unproductive. At the end of October not only was there the performance of her new composition but also her symphonic compositions were recorded for her new CD. Besides that, there will be a performance of Narbutaitė’s opera The Cornet on 28 November at the Lithuanian Opera and Ballet Theatre (kein gestern, kein morgen is a reworking of one of the scenes from the opera for concert performance). That will be the second and last performance of The Cornet this season. And Narbutaitė’s ‘anniversary’ year, during which we can expect at least several premieres of her work, will take off from January.

The international record company Naxos, in collaboration with Music Information Centre Lithuania, intends to release the newest CD dedicated to Narbutaitė’s compositions. The spiritus movens behind this idea is the conductor Christopher Lyndon-Gee (Italy/Australia) whom we saw in Vilnius conducting the premiere of kein gestern, kein morgen at the Gaida contemporary music festival (on 23 October at the Lithuanian National Philharmonic Hall). This composition for soloists and symphony orchestra is one of three compositions on the new record besides Symphony No. 4 riva fiume sinfonia and La barca.

The composer has said that her collaboration with the conductor began when Lyndon-Gee conducted the premiere of her riva fiume sinfonia at the 50th Warsaw Autumn festival (2007). ‘Christopher Lyndon-Gee very much liked the composition but I really could not have hoped that his appreciation of it would result in such a concrete step being taken. He’s recorded a lot for Naxos and he was the one to suggest this idea to them. So riva fiume sinfonia was the main focus of this CD.’

A lot of water had to flow under the bridge until the word became flesh. However, at the end of October this year, the morning after the concert at the Gaida festival, Lyndon-Gee and the Lithuanian National Symphony Orchestra recorded compositions for the new record. The list of works was chosen by both Narbutaitė and Lyndon-Gee, working in collaboration. The composer suggested that La barca be included (it was premiered in 2005 in Munich by the Bavarian Radio Symphony Orchestra conducted by José Serebrier) while Lyndon-Gee asked that Narbutaitė prepare The Cornet suite. However, the composer did not find the idea of a suite acceptable and so chose a free-standing episode from the opera with two singers: she significantly enhanced the role of the orchestra and this is how an independent vocal-symphonic composition came into being. The composer was also responsible for the order of the compositions on the record: La barca, kein gestern, kein morgen and riva fiume sinfonia.

‘In shaping the composition kein gestern, kein morgen, I was thinking about the planned CD and the close association with the other works included on the recording – La barca and riva fiume sinfonia, as well as about the fact that the juxtapositioning of these three compositions and the resultant interaction may make clearer the existing meanings and create new ones. Amongst these different opuses there exist connections of musical expression and so I imagine that the entire sequence presented on the record could be perceived as a single and coherent ‘macro-composition’. Needless to say, I hope for a new quality of performance which may perhaps allow one or other of the works to be heard in a completely different way.’

The new record of Narbutaitė’s work will reflect her symphonic compositions over the last decade. La barca was, according to the composer, unexpectedly ‘resurrected’ from oblivion at the beginning of this year: the BBC Symphony Orchestra recorded the composition for BBC radio on the initiative of the Finnish conductor Sakari Oramo and the recording was broadcast on BBC Radio 3 in February. As the conductor said on that occasion in an interview, ‘you hear fantastic things’ in Narbutaitė’s music. ‘Interesting things are happening in the Baltic.’

On 24 January 2016 the Tallinn Chamber Orchestra conducted by Juha Kangas will perform Was There a Butterfly? in Tallinn. This composition was dedicated to Narbutaitė’s long-term colleague Kang and the Ostrobothnian Chamber Orchestra conducted by him (the premiere took place in Finland in 2014); the above mentioned musicians have recorded the opus and plan to release it in 2016 (the recording company is Alba). In February the Chameleon Arts Ensemble will perform Narbutaitė’s Winterserenade in Boston.

Premieres of two of Narbutaitė’s works will take place next year. A performance of her new composition Heliography for female voice, viola, cello and drums is planned to take place in Ireland; the performers earmarked are Sarah Maria Sun (Germany) and the Garth Knox Trio (France). The composition was commissioned by the Louth Contemporary Music Society (Ireland). The premiere of Narbutaitė’s new chamber composition will take place at the Thomas Mann Festival in Lithuania in July 2016. This will be an anniversary festival for which the composer will have written a work for the first time.

Translated from the Lithuanian by Romas Kinka
MICL inf.