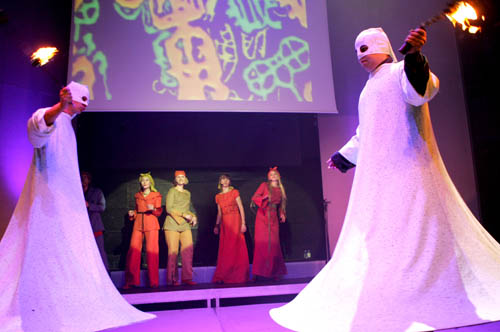 It may sound banal, but it’s true: we live in times of postmodern eclecticism, when no one seems to be surprised by ‘unexpected’ connections between apparently hardly related elements, when originality of individual style is not so much a matter of revolutionary or authentic innovation or the so-called refined aesthetics as it is a matter of original and entertaining shake of the good old stuff and the quickly developing new, faddish, commercially attractive things. Just look around and listen. The towers of the baroque churches and rotten wooden architecture reflect in the glass of the stainless steel and concrete constructions; colourful mandalas of trademarks on the walls of the shopping malls, adopting the role of consumerist temples; archaic musical cultures of the world, pulsing with the rhythms of global subcultures... Ancient Future, declares the name of one of the oldest organisations of world fusion music, based on the eclectic New Age ideology.

The Lithuanian heritage of ethnic music is no exception. Over the last decade it has experienced various post-folk transformations, world fusion tendencies, and also the influence of neopaganism. At the beginning of the last decade of the 20th century the still-present idea of performing authentic (though already mostly reconstructed) folklore gradually turned into a wish to preserve it in the present – to present it as a contemporary, vivacious, attractive phenomenon. One after another, various bands popped up, combining authentic folk songs and instrumental music with rock, funk, blues, jazz, electronica, pop, and music from all over the world. Among the most prominent pioneers of this scene in Lithuania are the folk singer Veronika Povilionienė, folk-rock bands Atalyja and Žalvarinis, and experimental electronic composer Donis (Donatas Bielkauskas).

However, the greatest concentration of crossover eclecticism and all kinds of show elements was achieved in such projects as Sutartinės Party and ZAP. The Four Elements, both projects commissioned by festival producers. The spiritus movens behind both was composer Linas Rimša, a diverse personality active in producing, teaching, cinema and theatre music, as well as an acid jazz band leader. No less diverse is his work, probably best known for the original crossover projects, fusing anything from ethnic music, popular opera repertoire or the works by classical and contemporary composers with jazz, hip-hop and electronic dance music.

“I have always admired, to the point of ecstasy, the success in finding common ground, hearing a combination of different elements,” explains the composer. “All the efforts required for finding that one little ‘key’ are compensated by the unexpected harmony, the paradoxical awareness that this common ground was not created by me – it exists on its own. By fusing Lithuanian folklore with other elements, I experience various emotions, and these emotions are inspired by things that we all share. I believe that they should be sought for in other musics of the world, in people and in their communication.”

In 2003, the MaerzMusik festival in Berlin featured the premiere of the modern folk music project Sutartinės Party by Linas Rimša and Linas Paulauskis. The commissioners, who often use their festival to explore the connections between modern and traditional art, chose the most unique segment of the Lithuanian folklore – the archaic polyphonic songs sutartinės. The polytonal counterpoint, unusual sound of parallel seconds, syncopated rhythms, ritual dance movements and endless repetition verging on trance-like state in sutartinės appeared to the composers close to contemporary varieties of electronic dance music. According to Linas Paulauskis, “that was the whole idea of Sutartinės Party: authentic sutartinės combined with house, trance, bigbeat, acid jazz, triphop, dub and other styles, as if testing their compatibility with the archaic tradition (actually, the very word sutartinės in Lithuanian means “to agree, to match, to be compatible”).”

Traditionally, sutartinės were performed exclusively by women, therefore the project participants were a group of female sutartinės singers, who also use skudučiai (the type of Pan flute) and traditional dance movements in their shows. The untraditional part is that they must conform to the composers’ idea of the composition’s development, starting and stopping their singing at certain points, as if becoming just another track in the multi-layered electronic instrumentation. Witty juxtapositions of different contexts – e.g., traditional flax picking song with slow dub riddims (Three in Four Dub), Shrovetide song turned into a soundtrack for a imaginary detective thriller (Spy Song), or a playful song about a goat dancing to the German techno-trance rhythm (So They Dance, So They Stomp) - turn the ritual seriousness of sutartinės into amusing entertainment, featuring parts by jazzing and rapping saxophonist, fiddle and bagpipe players, as well as visual projections of folk ornaments. Over the several years after the premiere in Berlin this project became one of the most desired export products of Lithuanian culture. The repertoire grew to almost twice the original size, the performers changed, the geography of the shows expanded – from Linz (LinzFest, 2005), London (Iron Wolf, ICA, 2006), Warsaw (Lithuanian Culture Days in Poland, Zamek Ujazdowski, 2006) to the most unexpected places in the native Lithuania: starting with ancient mansions or the front yard of the castle of the Grand Dukes and ending with clubs and the renovated Central Shopping Mall in the capital city.

In the autumn of 2006, during the Capital City Days in Vilnius, another project was presented – the musical mystery ZAP. The Four Elements. The concept and music of the event, meant for an open space, was created by four Lithuanian composers of the younger generation – Giedrius Svilainis, Martas B., Jonas Jurkūnas and the same Linas Rimša. The four elements are water, earth, air and fire, the four elements of nature, each of which has its own part in the project, and, at the same time, they represent the four composers, each of whom feels at home in their chosen element. The smooth interflow of the four parts forms a sort of cosmogony plot, which becomes the axis for the synthesis of various musical cultures. The distinct character of world music in the project comes from the powerful section of percussion (the premiere was played by the Spanish percussion virtuoso Asambai and his international percussion band Livika), Indian tabla, Middle Eastern oud and Lithuanian lamzdelis, imitating the sound of the Irish whistle. The colourful electronic soundscapes merge with the choir voices and well-known Lithuanian pop, hip-hop and folk music singers. Naturally, celebrations of this size never go without fireworks, light effects, choreography and visual projections, where the archetypes of the old world fuse with images of contemporary life. The ancient inevitably becomes the future.