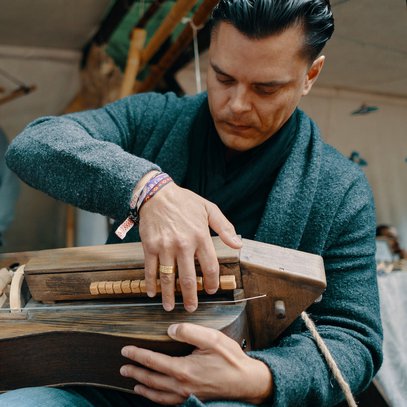 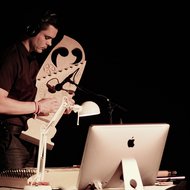 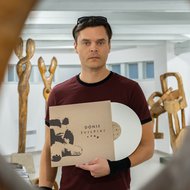 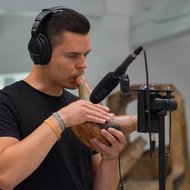 Donatas Bielkauskas is one of the brightest creators of today's post-folklore tradition in Lithuania and the creative engine of this current, whose music combines old Baltic folklore with contemporary sound interpretations. Donatas is a creator for whom music is both mastery and philosophy. It is possible to understand that music is a multifaceted phenomenon operating in different directions - sound, social, communicative - only by constantly experiencing the same multiplicity. Extensive knowledge of instruments, rhythms, music styles allow him to create unique sound projects, including both electronic and pure ambient soundscapes, in which ethnic motifs intertwine with industrial sound structures and sounds of nature and / or in situ found objects.

In essence, all of Donatas’ works call for multi-layered experiences that describe the creator’s mastery and attentiveness, or more precisely - the hearing of the details that overlie in the listener’s consciousness. Professor Giedrius Kuprevičius has very aptly noticed Donatas Bielkauskas’ desire to preserve the cells of basic feelings and sensations, his ability to play in a modern and archaic expression. It is this harmony and the constant overlap and undulation of these two layers, revealing one or the other, sometimes deliberately directing and sometimes succumbing to organic change, that allows us to discover ever different sound exposures, their colors and fine sand.

Bars bars - A Hawk is Flying

Bars bars - In the Middle of the Field

X
Bars bars - In the Middle of the Field

During his nearly thirty-year career, Donatas Bielkauskas has released a number of original or group albums. A total of over 40 publications, the most prominent of which are considered to be:

● “Švilpiai” (“Whistles”, 2003), post released in 2008 and 2016 in CD, and in vinyl format in 2021;
● the album “Bite lingo” (2006), based on military-historical folklore and recorded with the singer Rasa Serra and the ensemble “Kuršių ainiai”, and its sequel the album “Kas tave šaukia...” (“Who calls for you…”, 2010), post released in 2019 in double CD;
● the album „Без гражданства“ (“Without citizenship”, 2016), dedicated to grandfather;
● and the latest project “Mirštantis. Miestas. Gyvenimui” (“Dying. City. For Life”, 2021), the purpose of which, according to the author, is to “combine audio contents different by their nature. The industrial landscape of Klaipeda intertwines with a natural landscape: dead with the living. Moving from one to another or drastically destroying each other at the same time.”

For more than a decade he has been making music with other performers or musical projects („Gyvata“, „Esatis“, „Žemyna“, „Tykumos“, „Tabalai“, kt.). He is also an author of several conceptual avant-garde projects, such as “Donis” (since 1998), “d.n.s.” (since 2003) and “Wejdas” (since 1994 together with Darius Gerulaitis). Donatas’ sense of music is complemented by his constant publishing work in a mobile ethnic music recording studio, recording other post-folk and ethnic music performers (over 40 CDs and DVDs have been released in 15 years).

Donatas’ multifaceted field of interests reveals in a diverse context of interdisciplinary art, collaborating with creators of other fields. In 2015 he has curated the project “KLAIPĖDA. Inaudible Sound”, which allowed one to hear inaudible Klaipėda. In 2017 together with dancer Rūta Butkus and other performers, he prepared a conceptual sound and movement art project “Energosound” for the non-traditional space of Klaipėda Energy. In 2019 he has realized the sound installation at the exhibition “Equinox” by the artist Patricija Gilytė, and in 2020 invited the visitors of the project “Sound Labyrinth” to touch various objects or instruments and create the sound installation themselves. The artist actively participates in the Kaunas 2022 programs, for which he prepares special audio projects.

Donatas Bielkauskas’ creative biography is presented not only in representative databases, but also in significant alternative music platforms. Back in 2007 he was recognized as the Lithuanian Ethnic Artist of the Year, and in recent years - nominated for the highest city and republican awards (like Klaipėda Culture Master, Golden Cross of the Stage or Silver Crane). His work has repeatedly been reviewed by critics, musicologists and presented in major cultural publications and portals. In 2021 D. Bielkauskas was granted the status of an Art Creator by the Culture Ministry of Lithuania.