At the end of the last year, Naxos, one of the world's largest recording companies featuring old and contemporary classics, released Osvaldas Balakauskas' Requiem in memoriam Stasys Lozoraitis. This is the first CD in the series of Lithuanian music, which Naxos plans to release within several coming years in collaboration with the Lithuanian Music Information and Publishing Centre. The recording features first performers of this work – mezzo-soprano Judita Leitaitė and St. Christopher Chamber Orchestra under Donatas Katkus – as well as specially invited "Jauna muzika" Choir (dir. by Vaclovas Augustinas).

Within the context of post-war Lithuanian modernism, the music of Osvaldas Balakauskas stands out for its clearly cosmopolitan tendencies that diverged from the principal course of the Lithuanian national school – a combination of traditional folk music and a modern form of expression. His music is first of all recognized for its precision of style and form, a fact, which is borne out in nearly all of his works written from 1964 to this day. As well as in the composer's invented and theoretically founded dodecatonic system – a new brand of tonality with distinctive relationships within non-repetitive series of sounds – that gives his music a unique harmonic tinge, and is often described as 'Balakauskas tonality'. His refined rhythmic games (such as metrorhythmic progressions and cumulative development of extended durations) raise associations with Messiaen's non-retrogradable rhythms, as does his attention to sound colour – Balakauskas is considered one of the most sensitive masters of orchestration among Lithuanian composers.

Although his style has changed over the four decades, his writing remains recognizable throughout. At the present time, Balakauskas says he is aiming for simplicity, and claims he has returned to jazz and quasi-improvised melodies that he favoured in his youth.

This turn towards simplicity is apparent in his Requiem in memoriam Stasys Lozoraitis for mezzo-soprano, choir, and chamber orchestra written in 1995. The work expresses his deep reverence for the Lithuanian diplomat Stasys Lozoraitis who, as the composer puts it, was "a champion of liberty, and an example of honour and nobility".

Requiem is a significant exception within the context of Balakauskas' work. First, in that, unlike the majority of his works - which are predominantly instrumental pieces - this one belongs to the small number of large-scale works for voice and instruments (other examples include Tyla. Le silence (1986) for four voices and orchestra, and the chamber opera La lointaine (2002) for three voices and chamber ensemble). Secondly, this is in fact the composer's only 'religious' work, which yet avoids the excesses of religiosity declaring his spiritual and civic convictions instead.

Chamber-like in form, with a general atmosphere of consonant serenity, this Requiem emanates a sort of medieval spirituality, a peaceful contemplation of death and mourning without any attempt for consolation. "I do not believe that death is a problem, for we do not solve it; it is unyielding and always resolved for us. (...) It is a condition of life," the composer once said in an interview. Although this work occasionally refers to the mediaeval and renaissance tradition of church music – the Gregorian plainsong, organum, and Ars nova mensural motets – it does not keep to the canonic structure of a Requiem Mass. "It is even more old-fashioned than Palestrina" – is how the composer once described his Requiem.

The impact of its pristine 'simplicity' is immediate and profound. Perhaps it was this aspect of Balakauskas' Requiem that motivated Naxos to launch the series of his portrait CDs with this recording produced in 2003 by the Lithuanian Radio (sound engineer Vilius Kondrotas). Next Naxos release of Balakauskas will include the 4th and 5th symphonies recorded by the Lithuanian National Symphony Orchestra under Juozas Domarkas. 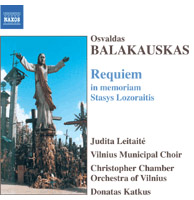 This is no super-dreadnought of a Requiem. Its message and effect is registered in austerity, not flamboyance. (...) If you react badly to effusive flamboyance in such works, this Requiem might well be just what you have been waiting for. (...) Music of simplicity and integrity. Not minimalistic – so not a brother to Reich, Nyman or Glass. Not mystical – so evading any parallels with Tavener or Messiaen.
Rob Barnett, musicweb-international.com

Balakauskas' setting possesses a considerable expressive strength, for all its emotional restraint. It is also sometimes poignantly moving. One just has to listen to the beautiful Hostias [track 8] and the Lacrymosa [track 11], both somewhat reminiscent of Górecki, to gain a good idea of his brand of lyricism.
Hubert Culot, Classical Music Web

This use of a wide tonal and instrumental palette also creates a range of emotion and some spiritual depth that winds through the 12 segments. Interestingly though, its overall character is rather light and upbeat, uncharacteristically so for a requiem.
Duane Harper Grant, Sequenza 21