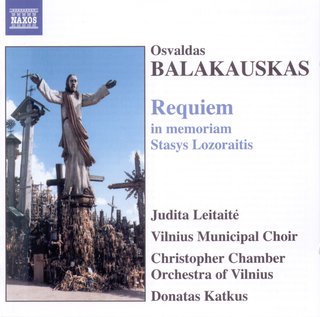 One of the leaders of the modern school of Lithuanian composition, Balakauskas wrote his Requiem, his only religious composition, in memory of the Lithuanian diplomat and champion of national liberty, Stasys Lozoraitis, who died suddenly in 1994. Not overly preoccupied with musical fashion, Balakauskas can be described perhaps as a Lithuanian Messiaen. Unlike the monumental settings by Berlioz, Verdi, Britten or Penderecki, his Requiem is an intimate and meditative chamber work more akin to the compositional language and ethos of Tavener or Pärt. Balakauskas himself claims to have created an emphatically traditional work.