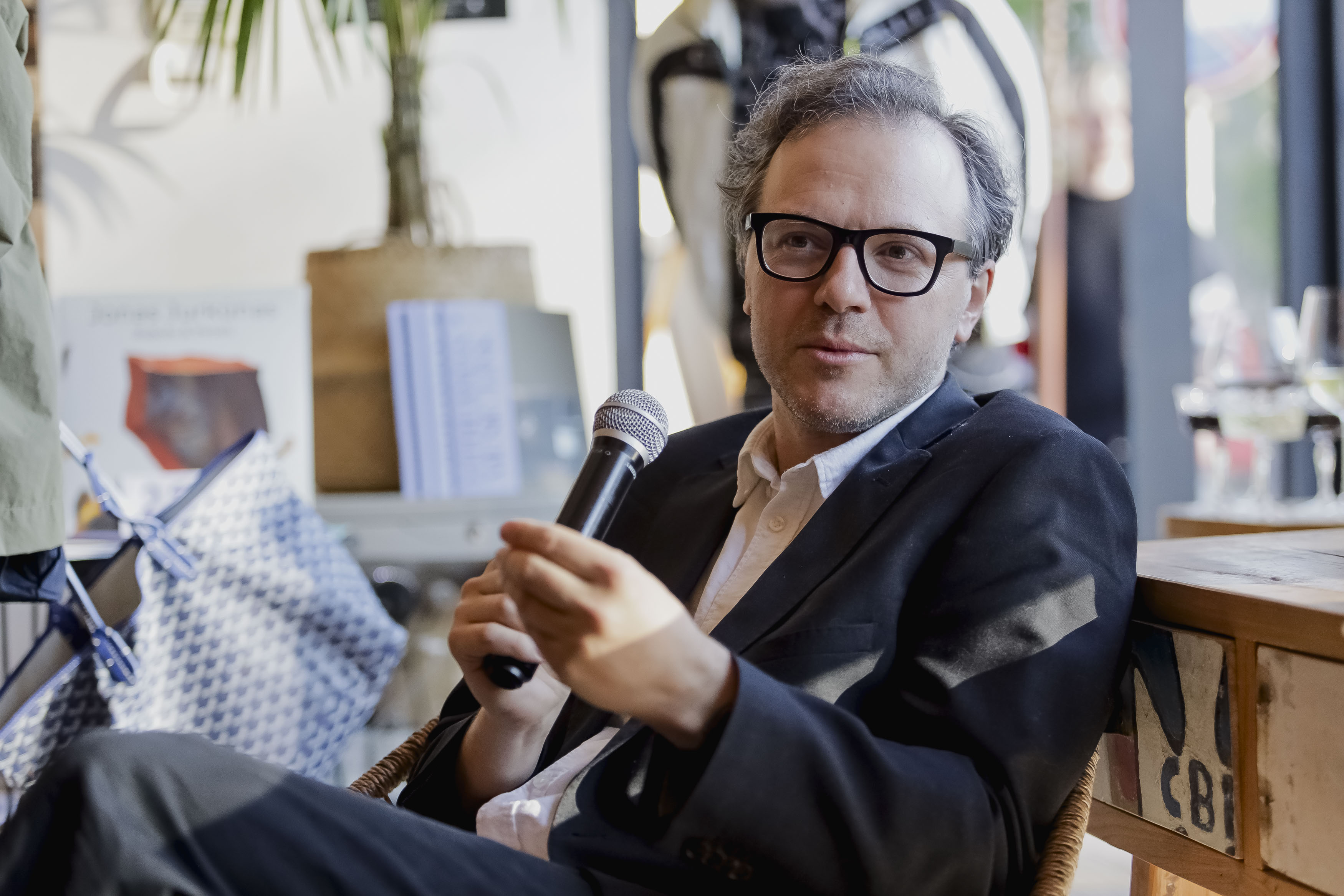 The Music Information Centre Lithuania has just released and presented the vinyl record containing music by composer Jonas Jurkūnas. The three pieces, recorded by Lithuania’s well-known musicians, are Robots & Petals, the concerto for piano and symphony orchestra; Golden Chains, the concerto for piano and big band; and Temporarily. Letter to Charles, a symphonic miniature. Pianist Motiejus Bazaras recorded his part with the Lithuanian National Symphony Orchestra, while his peer Daumantas Kirilauskas played together with the Kaunas Big Band. The recording was made by Aleksandra Kerienė and Vilius Keras, the nation’s top audio engineers, and their team.

As a composer, Jonas Jurkūnas is a remarkably versatile character. For him, writing an opera and, at the same time, designing a project dedicated to electronic music might seem entirely natural. According to musicologist Asta Pakarklytė, he briskly navigates between different styles and genres and has successfully combined traditional music-writing with electronic experimentation, pop culture, and collaboration with theatre and cinema. Occasionally yet wholeheartedly he also joins interdisciplinary initiatives that merge many of the above.

Completed in 2016 as a final PhD piece, Robots & Petals comes closest to the traditional genre involving a piano and an orchestra. In his five-part work, Jurkūnas offers an imaginary dialogue between robots and petals. Robots act here as mechanical entities that wrap presents, erect a skyscraper, and march along the streets until the whirlwind of petals eventually hauls everything into a wild dance. The piece brings together compositional opposites alongside healthy portions of humour, forceful and ever-changing rhythm, a broad palette of emotions, and varied tempos. Robots & Petals was recorded by the pianist Motiejus Bazaras and the Lithuanian National Symphony Orchestra conducted by Juozas Domarkas.

The piece, as the composer puts it, contemplates the spirituality of a machine and the share of machine inside a human. In other words, it asks just how much automatism do our lives and creative acts contain?

“These ideas came to my mind years ago while watching Daft Punk music videos showing humans posing as robots,” Jurkūnas says. “For modern composers, computers replace handwriting, therefore they develop their own relationship with machines. On the other hand, our life stands up against any human-induced systematisation and control. The petals, therefore, emerge as symbols of all that is natural, unexplainable, undefinable and non-mechanical. That’s what life is like and why it always conquers humans.” 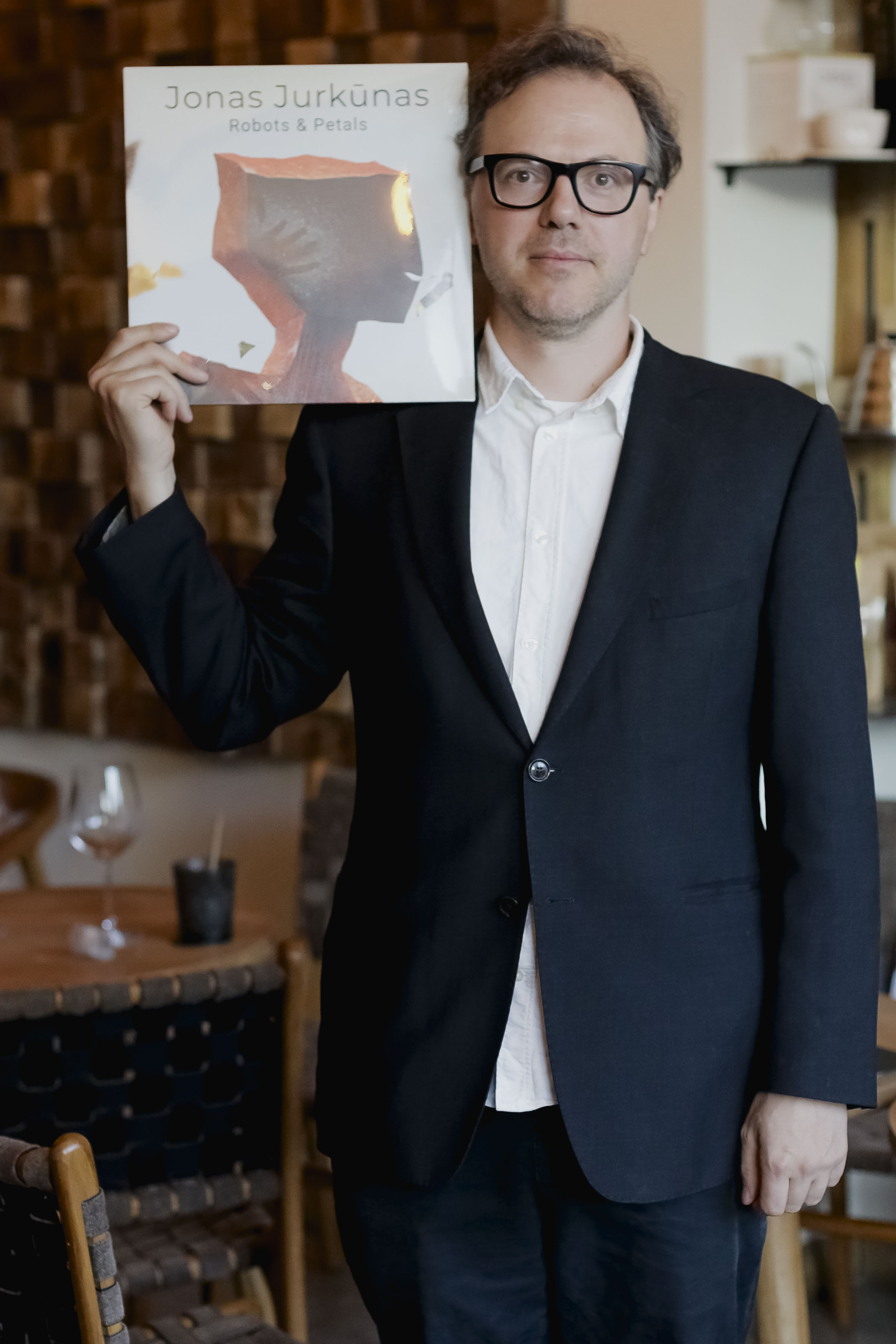 Between classics and jazz

Golden Chains (2021) is a nice example revealing the composer’s jazz-rooted background. The initial idea of the composition, Jurkūnas admits, belongs, at least in part, to the pianist Daumantas Kirilauskas who eventually recorded the piece together with the Kaunas Big Band and the conductor Vytautas Lukočius.

“Several years ago, Daumantas told me over the phone he had dreamt himself playing with a big band. For me, it sounded like a piece commission,” Jurkūnas recalls. “I promised him to write a piece and, very naturally, dedicated it to Daumantas. It is about him and his passion for jazz. It is about his mastery in playing both jazz and classical music.”

Using the mathematical concept of the Markov chain, the composer toys with the diverse forms of the same musical material. By doing this, he reveals his jazz-inspired attitude toward the algorithmic music-making which also involves free improvisation, lyric episodes, hip-hop drum patterns, and a touch of polyrhythms. The title, Jurkūnas maintains, may lead to somewhat deeper meanings. “Gold is precious, therefore sometimes we fall in love with our own chains that hold us back from new discoveries and bar leaving the comfort zone.”

Between cinema and modernism

Temporarily. Letter to Charles, the shortest piece on the album, was composed in 2012 and owes its inspiration to the soundtrack of Laikinai (Temporarily), a film by Jūratė Samulionytė, and the sonic and temperamental reflections of The Unanswered Question, a piece by Charles Ives. The seven-minute symphonic miniature by Jurkūnas reveals a variety of changing spirits.

“The piece displays two ideas of our lives,” the composer says. “One is the ever-changing eternity and ceaseless beginning with its naïve positivity and all the answers ready. The other appears as a static and realistic doubt about the only one issue of existence.”

The piece, recorded by four female vocalists – Kristina Žaldokaitė, Berta Timinskaitė, Ieva Mukauskaitė, and Gaudrė Vaitkutė – and the Kaunas City Symphony Orchestra under the baton of Imants Resnis, has shown its ability to start a new life independent of screen.

“Cinema is one of the areas that offer me inspiration,” Jurkūnas notes. “It is quite different from traditional music-making in that it involves collective work. I am happy to see my film music entering the new stage of its existence.”

Robots & Petals is available on MusicLithuania.com and bandcamp.com. The release of the album was funded by the Lithuanian Council for Culture and the Ministry of Culture of the Republic of Lithuania.

The short video from the 2021 recording session of Golden Chains: