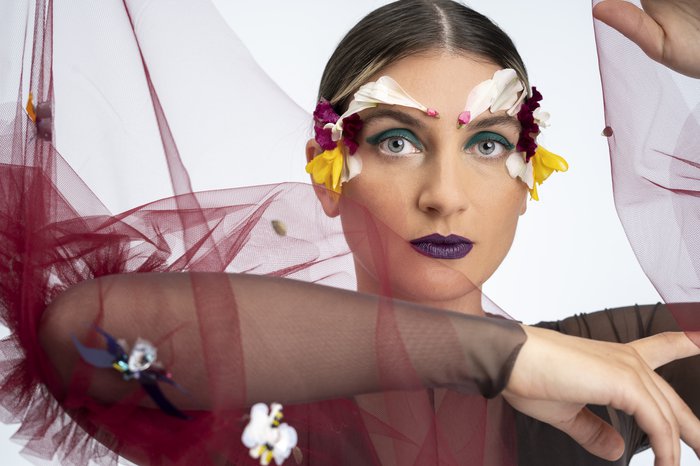 Bird Language is the title that Simona Smirnova, composer and performer, chose for her new album which weaves into a peculiar canvas Lithuanian, Balkan, and Middle Eastern folklore as well as the elements of academic and jazz music. The album’s eight compositions are very personal and mosaic-like, yet also similar from the aesthetic point of view as they reflect Smirnova’s individuality and ethnic identity, something she has been exploring since moving to New York.

“Living in the city of almost nine million inhabitants who represent the world’s each and every ethnic group, one faces a natural question – who am I and what kind of music am I able to offer within that musical mosaic,” she says. “My Slavic, Balkan and Middle Eastern background, the fact I was born during the days of the Singing Revolution in Lithuania, and my young days amid the very patriotic climate – all this has added to my personality which is culturally Lithuanian yet very diverse.”

Smirnova, who has played kanklės, the Lithuanian string instrument, since her early days, now uses it to perform in Arabian or Balkan scales. While studying at the Berklee College of Music, she played it as a member of the Middle Eastern ensemble, her peers accepting it naturally. Somewhat exotic to a Lithuanian ear, her music also incorporates texts and melodic patterns of Lithuanian sutartinės, an archaic type of polyphonic singing, as well as natural vocal – all meant to carry the listener into the mystic ancient world. 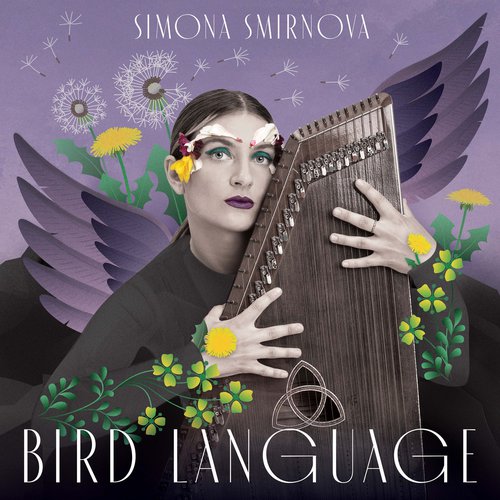 “I wish to express my most natural inner feelings, and they often sound archaic,” she explains. “Alongside theoretic and academic knowledge, intrinsic musical intellect dwells inside me. Very often it knocks from within asking to be released into the daylight. It is my Balkan and Middle Eastern blood, the call of my ancestors. The innate archaic musicality which, like a dandelion, forces itself through the roadside asphalt and grows over all the years I have spent at music schools.”

Carl Gustav Jung’s idea of a primitive and archaic human, she adds, is yet another source of inspiration as the psychiatrist’s theory calls for the return to natural world, archetypes, and human’s wild nature. It is in relation to Jung, who analyses the ties between the human and the nature, that Smirnova says her album, Bird Language, is dedicated to the natural world. In her words, the title represents both her style of singing – the imitation of bird songs – and the core concept of the recording. Bird Language, she maintains, is about our relationship with the nature, its perception and the ability to read its signs.

“Folklore, therefore, is a useful tool to reveal that relationship,” she adds. “Lithuanian folk songs are particularly important in this respect, because they tell the history of our culture through the symbols of nature.”

The title piece, Bird Language, opens the album with its bird-like vocals and the blend of electronics and kanklės; it then grows into a wild song without a meaningful text yet full of vague chunks of Lithuanian, Balkan, and Arabian folklore merging into a surprising yet aesthetically coherent music. The imitation of singing birds also appears in Intuition, but this piece puts stronger emphasis on improvisation and jazz aesthetics, eventually leading to the motives pertinent to urban sights rather than natural landscapes. In Secrets, the relationship with birds emerges through text, not music. 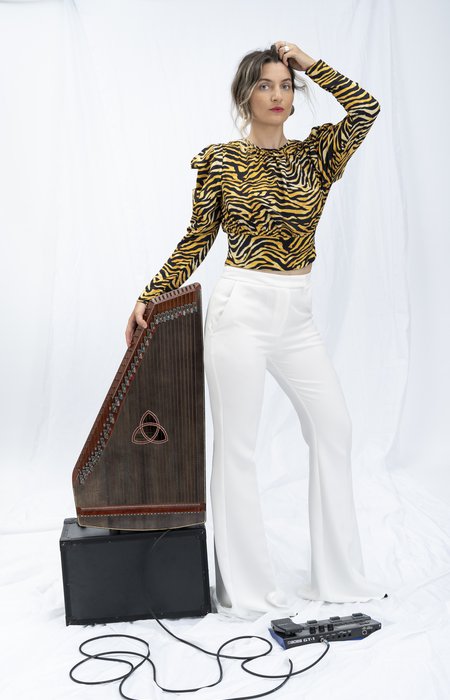 All the pieces on the album reveal – in different yet always subtle manner – the ties between folklore and modern styles through modal and harmonic nearness rather than through direct quotes from Lithuanian folk songs. For Smirnova, the link between folklore, jazz and academic music is in many ways similar to the life of a modern human within the urban landscape.

“Music is a profound art of soul which speaks of generational stories and changes, of cultural tragedies and achievements,” she says. “That’s how jazz was born. That’s perhaps how I try to make something new and unheard in the context of global music scene. My efforts are sincere as I strive, with each new sound I record, to remind the listener of something already heard yet forgotten; I want to remind them of themselves and the recurring dream they dream time and time again without even getting to its meaning.”

The parallels between the nature and the city, evoked though sounds, inevitably call for a closer look into the links between the nature and the human. According to Smirnova, the listener hopefully will find an individual pathway to unpack her music, while the sonic experience of the album will perhaps help listeners to reflect, in a very individual manner, the relationship between their urban being and the nature, or even will wake them up from winter sleep and give strength to finally start the lives of their calling. This is exactly the message that Dandelion Time is trying to convey.

“For me, music is a metaphor of blooming dandelions,” the composer says. “I hope, it will whisper to the listener: ‘It’s time to wake up, time to get back home’.”

To wake the listener from winter sleep, a tiny motif played by kanklės gradually grows into a larger texture with ever widening melodic scope. Improvisation-based tandem of piano and vocals, in which the two lines are linked modally rather than melodically, is crisp and bright, evoking the atmosphere of warm sunny morning.

Out of the Ashes speaks of returning home too.

“Although Lithuania is very dear to me and I visit my homeland often, to me the concept of home means the return to my intimate self – my calling, my inner child, the initial impulse to live,” Smirnova explains.

The composition, imbued with Balkan motives, sounds rather cinematographic; classical string instruments in it add up to rhythmic patterns thus giving the piece the feeling of a narrative. The story told through text and music, however, is not exactly distinct in this case. On the contrary, it is pretty abstract, elemental and open to free personalised interpretation of the listener. 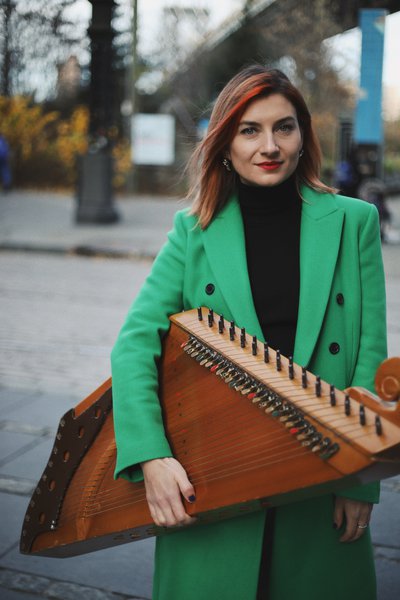 Volcano Dreams exudes strong nostalgic longing for home as well. The text is in English, but it offers obvious parallels with the poetry of Lithuanian folk songs, especially when they speak of the longing for your mother, father, brother or sister. The instrumentation of the piece puts a particular emphasis on kanklės. For the listener, glissandos of the vocals and dissonances in string chords might evoke allusions to luring but dangerous songs of the sirens, and yet they make Volcano Dreams sound, in a somewhat inexplicable way, very Lithuanian – melodic and sorrowful but at the same time homey and hopeful.

In terms of originality, however, Solstice and Rūta Žalioji (The Green Rue) stand out as the pieces where the motives of Lithuanian folklore are articulated more clearly. The former features quotes from sutartinės accompanied with improvisations played by kanklės and piano. The piece thus reveals the composer’s peculiar artistic features, while the composition itself is in a way comparable to the music of Sephardi nomads. Rūta Žalioji is, to a certain extent at least, a paraphrase on the Lithuanian folk song which, performed by kanklės and vocals, is particularly touching. The piece might be seen as the most revealing display of the composer’s multi-ethnic yet amazingly cohesive personality and the originality in her attitudes toward folk music.

On the whole, her new album is a somewhat extraordinary and mostly unfamiliar blend of the diverse musical phenomena. Any attempt to fit it into a certain stylistic and genre framework is both complicated and entirely unnecessary as the eight compositions on the Bird Language reveals Smirnova’s remarkably original style in which her musical and other experiences merge. Although Smirnova compares her own identity to a mosaic, her music bears little mosaic-like features as all the fragments fit into the frame very naturally, which, on the other hand, speaks of her maturity as a composer. Her treatment of Lithuanian folk music in this recording is particularly striking, just like her sensible and delicate quest for the identity of a modern human. The album, aimed at the devotees of different styles and genres, therefore is very personal both for herself and her listeners due to its openness to free interpretation of its musical meanings.