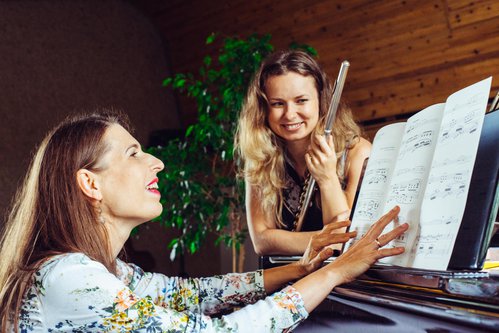 Music Information Centre Lithuania has published Lithuania’s greatest composer and painter of all time Mikalojus Konstantinas Čiurlionis works’ arrangements for flute and piano Lakštingala (The Nightingale). The arrangements were made and proposed to be published by the members of the ensemble Duo FluPia – flutist Vilmantė Kaziulytė and pianist Kristina Ivanauskaitė-Čiurilienė.

When the pianist Kristina Ivanauskaitė-Čiurilienė and the flutist Vilmantė Kaziulytė launched a chamber ensemble Duo FluPia, a natural desire to approach the music of Mikalojus Konstantinas Čiurlionis born very naturally, as both Kristina and Vilmantė had been familiar with the composer’s music since childhood.

The initial inspiration arrived in 2015 when Kristina’s ear caught the song of a nightingale through an open window during a live performance of one of Čiurlionis’ piano miniatures titled, aptly, The Nightingale. The dialogue between the piano and the real bird eventually prompted the arrangement of a piece for flute and piano. Later, the two musicians arranged seven other piano compositions by Čiurlionis. 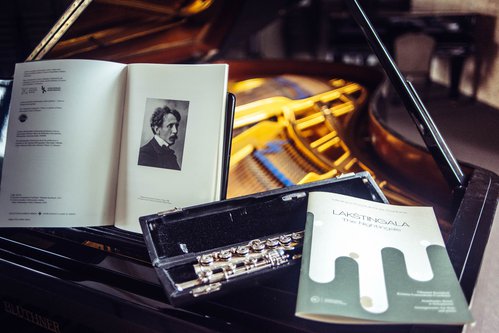 The arrangements are originally for flute and piano, but the set may also be performed by violin and piano. It is intended for anyone, from students to professional musicians, who want to include Čiurlionis’ music into their repertoire.

The arrangements are based on M. K. Čiurlionis’ early pieces. Such as Nocturne in F-sharp minor (VL 178) which include a prevailing pastoral and contemplative mood, subtle shades of harmonic changes. Also, the pieces written in the summer of 1901 in Druskininkai (VL 186, VL 187) which bear many features of Lithuanian folk songs. The remaining arrangements are based on works created after studies at the Leipzig conservatory (VL 239, VL 248, VL 268, VL 270, VL 294). The predominant chromatic harmonic language and intense polyphonic factures reveal a considerably more concentrated set of the composer’s emotions.

While setting up the eight miniatures, Kristina and Vilmantė scrutinised the compilations of the composer’s piano compositions edited by Jadvyga Čiurlionytė, Vytautas Landsbergis and Darius Kučinskas. Broadly speaking, the arrangements by Duo FluPia are based on these publications, yet they feature a number of individual interpretational nuances. Compared to the original pieces, the sound has become more ornate; the new arrangements reveal timbral dialogues between piano and flute, while the aforementioned The Nightingale now features a canon.

The activities and publications of the Music Information Center Lithuania are financed by the Lithuanian Council for Culture and by the Ministry of Culture of the Republic of Lithuania.

Translated from the Lithuanian by Darius Krasauskas, edited by Howard Jarvis
Information prepared by the Music Information Centre Lithuania
Photos by Tomas Terekas 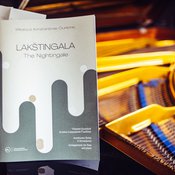 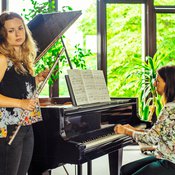 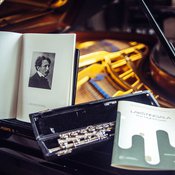 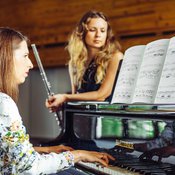 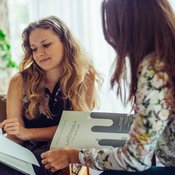 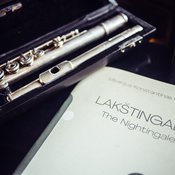 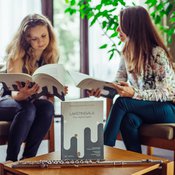 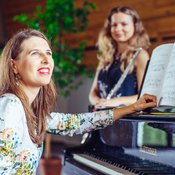 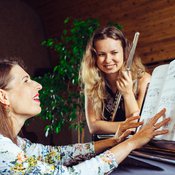 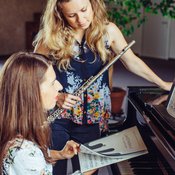