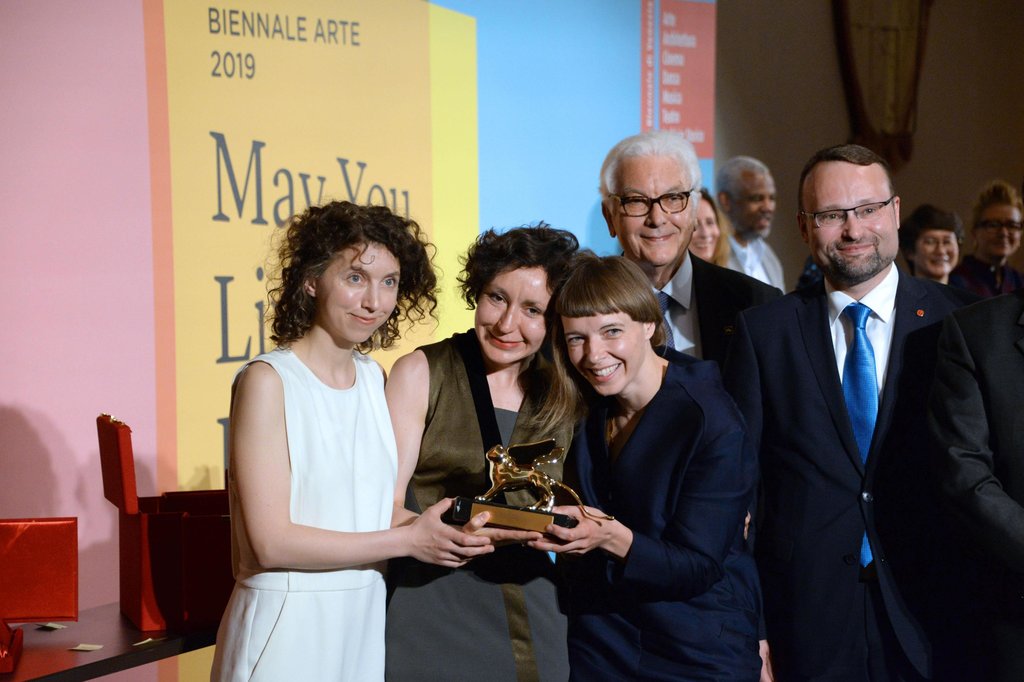 The Lithuanian artists, from left to right, Rugile Barzdziukaite, Vaiva Grainyte and Lina Lapelyte holding the Golden Lion award for best National Pavilion in Venice on May 11th. Photo: Andrea Merola/EPA, Shutterstock
The jury of the 58th Venice Biennale awarded the top prize for best national participation to Lithuania. It was represented by opera-performance about climate change Sun & Sea (Marina) by a theater and movie director Rugilė Barzdžiukaitė, a composer and performer Lina Lapelytė, and a writer, poet Vaiva Grainytė.

Lithuania won the Golden Lion, beating 89 other national entries at the Venice Art Biennale, the world’s oldest and most high-profile international exhibition of contemporary art. The Biennale is the pioneer of all other biennials, and is one of the most prestigious events in the field of culture. Lithuania has participated in it since 1999, therefore the artists’ trio and opera-performance Sun & Sea (Marina) were the 11th National Pavilion. 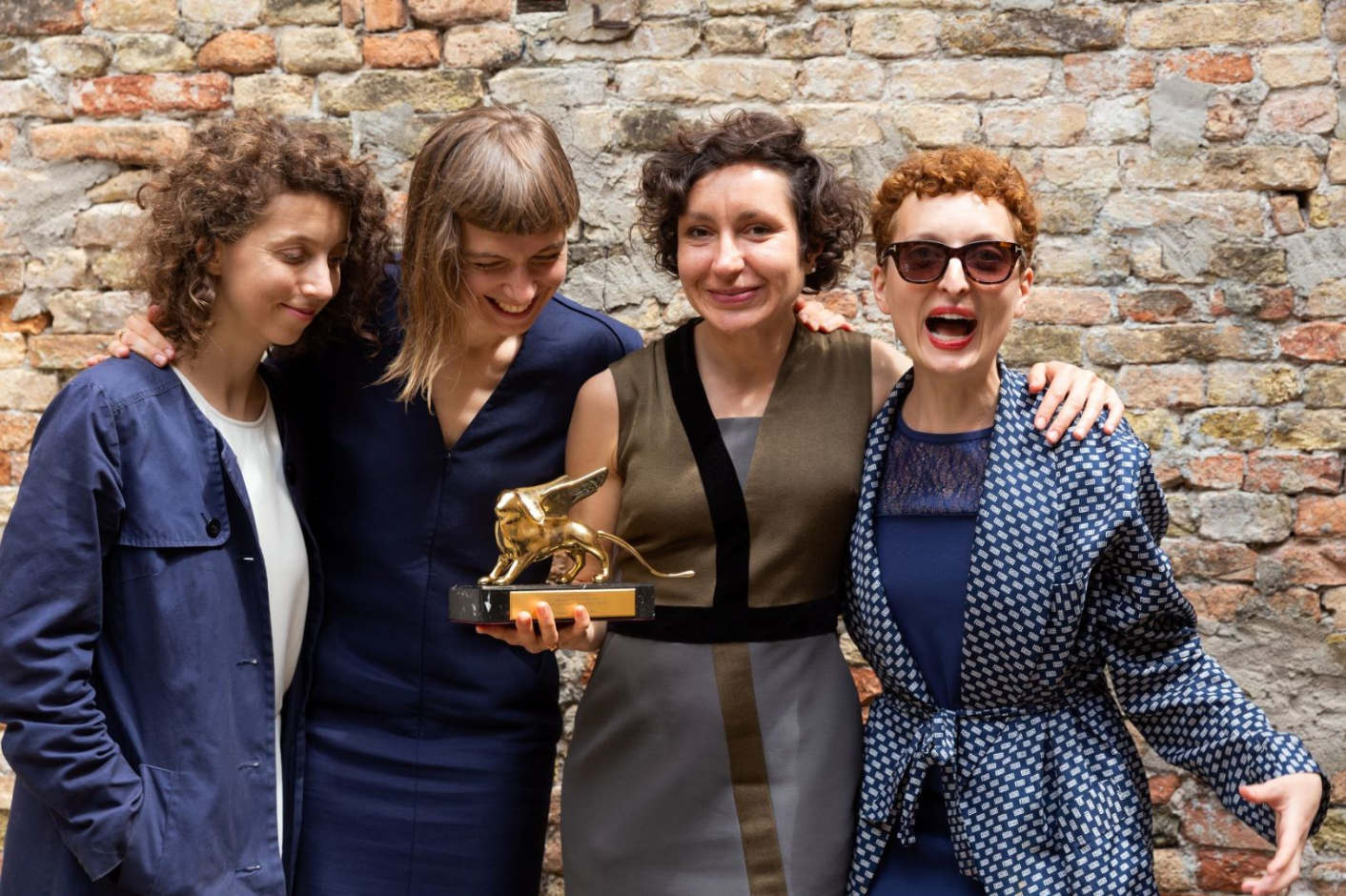 The Lithuanian artists and curator Lucia Pietroiusti. Photo: Andrej Vasilenko
The award was received for the experimental spirit of the Pavilion and its unexpected treatment of national representation. The jury was impressed with the inventive use of the venue to present a Brechtian opera as well as the Pavilion’s engagement with the city of Venice and its inhabitants. Sun & Sea (Marina) is a critique of leisure and of our times as sung by a cast of performers and volunteers portraying everyday people.

Lithuania's pavilion, housed in a building on the outskirts of the Arsenale, features an artificial beach with tons of sand. Viewing the performance from above, the audience encounters the main characters of Sun & Sea (Marina) – a modern society of holiday-goers in colorful bathing suits – lying down on the sandy floor. In the libretto, their thoughts unfold casually, easily. In their solos, actors sing about real-life troubles, happy moments, the everyday; the composition of sunscreen, a morning plan to make an omelet. Meanwhile, social and environmental crises and collapses emerge, as though from the depths of the characters’ consciousness.

“It's a piece about love, about an impulse we send, an impulse we receive and which, we hope, the audience gets,” says Lapelytė who composed the music for the opera. “We link the fragility of the human body to the fragility of the Earth's body. We are very happy that this fragile piece was noticed,” according to Barzdžiukaitė, the director. “We are running out of the Earth's resources, corrals are disappearing. But we still have love and friendship,” says Grainytė, who wrote the libretto. 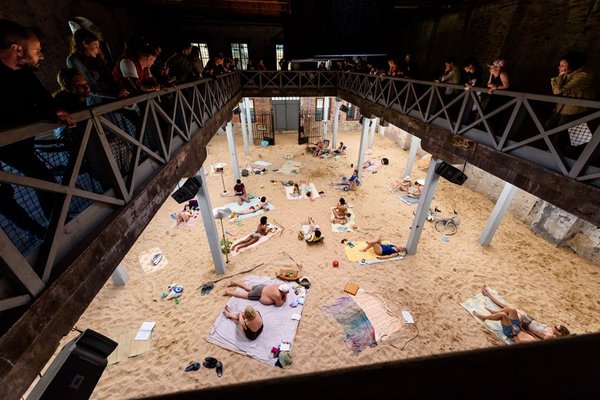 Sun & Sea (Marina), Pavilion of Lithuania, Golden Lion winner – Venice Art Biennale 2019. Photo: Andrea Avezzù, La Biennale di Venezia
Curator: Lucia Pietroiusti is Curator of General Ecology and Live Programmes at the Serpentine Galleries in London. She is the co-curator of The Shape of a Circle in the Mind of a Fish (with Filipa Ramos), a year-long symposium and research project on interspecies consciousness.

Commissioners:
Rasa Antanavičiūtė is the initiator, developer and executive director of Nida Art Colony of Vilnius Academy of Arts.
Jean-Baptiste Joly is the founder, former head and art director of Akademie Schloss Solitude - the largest artist residency program in Germany.

Production:
Original version of Sun and Sea was produced by Neon Realism with the support of Akademie Schloss Solitude, Münchner Kammerspiele, Goethe-Institut, Dresden State Theatre.
Sun and Sea (Marina) at the 58th Venice Biennale of art is funded by the Arts council of Lithuania and produced by Nida Art colony with the support by the Ujazdowski Castle CCA, private funds and independent supporters.