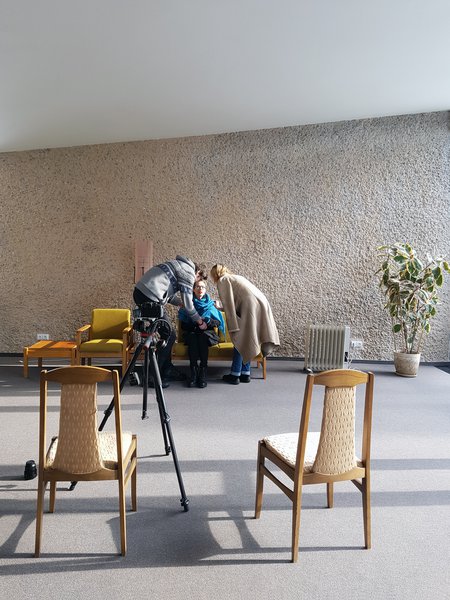 Filming the interview of Žibuoklė Martinaitytė. Composer’s House in Vilnius, March of 2018
After its launch at the Vilnius Book Fair, composer Žibuoklė Martinaitytė’s album, Horizons, emerged on the horizon of foreign music media, radio stations, record collectors and all sorts of hipsters. Reviewed by The Wire, the leading international new music magazine, and aired by the BBC Radio 3 to its two-million-strong audience, the album now has two dedicated video clips commissioned by the Music Information Centre Lithuania and created by a film director, Mikas Žukauskas.

Unlike in his earlier clip, shot for Textile by composer Egidija Medekšaitė, this time Mikas Žukauskas employed a much more narrative-laden imagery. Yet he confessed that finding a visual to match the music had not been an easy task. “Her music is both abstract and emotional and it took me quite a while to get the result that I was satisfied with,” the director said.

The creative process was far from straightforward, according to Eglė Bertašienė, the musicologist and the producer of the album. Plenty of filmed material and a multitude of details has been put aside as they spent countless hours listening to the composer’s music and reading her letters and essays, written mostly in New York, in the search for the best-suited soundtrack. “It felt like immersing into her music again and again,” she said. “Every bar is already very much familiar and the eruptive climax seems to be very close, and yet in the clip shot by Mikas the same music is heard as something completely new.“

The clip created for Žibuoklė Martinaitytė’s piece entitled Completely Embraced by the Beauty of Emptiness may offer listeners a rather unexpected experience as the director exploits the theme of space odyssey featuring slow-hovering astronomical bodies, clusters of gas and dust, the all-present coldness of alienation and a lama grazing in unwelcoming cosmic meadows – the concept the composer herself was quite surprised with. She admitted, however, that she becomes no less surprised whenever listeners talk about the images they “see“ when they hear her music. “Listening to music, each of us is watching a self-made film. This is why I am always curious to “see“ my music through other people’s eyes,“ the composer says. 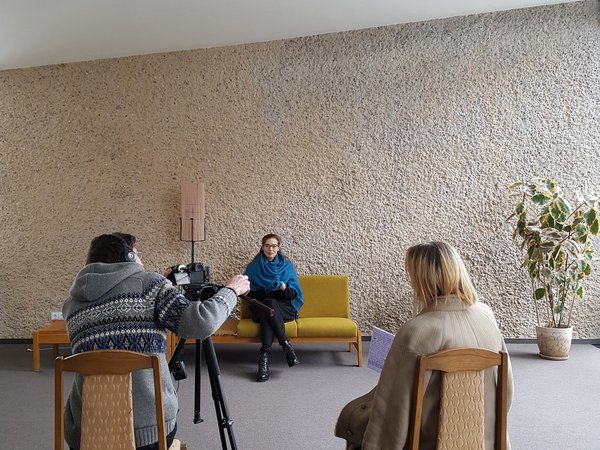 Filming the interview of Žibuoklė Martinaitytė. Composer’s House in Vilnius, March of 2018
Even though she sees no immediate need to visualise her music, Žibuoklė Martinaitytė agrees with the notion that in today’s image-dominated culture the added-up visual narrative may help people approach music and enrich its perception. Her music has activated this type of cinematographic imagination in at least several critics from Italy, France, the United Kingdom and the United States who wrote about her album for magazines and online media.

One of the pieces chosen for the visualisation was born out of the composer’s intense personal emotions. The music heard during the interview filmed by Mikas Žukauskas carries a strong emotional charge as well. The Wire touched upon the open and sometimes even radical intensity of her music: “Žibuoklė Martinaitytė writes stimulating music that bristles with energy and tension. Her orchestral and ensemble compositions are stratified, allusive, digressive and episodic. Dense and restless, they never appear cluttered. Theirs language is gestural, flowing and bold. <…> The dislocations, rapid acceleration and sudden slowing, and the disparate perspectives reconciled in Martinaitytė’s music embody complex structures of perception and rich textures of experience.”

Both video clips are available on the Music Information Centre’s channel on YouTube. The Lithuanian Council for Culture funded the release of Žibuoklė Martinaitytė’s album, Horizons. The Press, Radio and Television Support Foundation funded the making of the video clips.