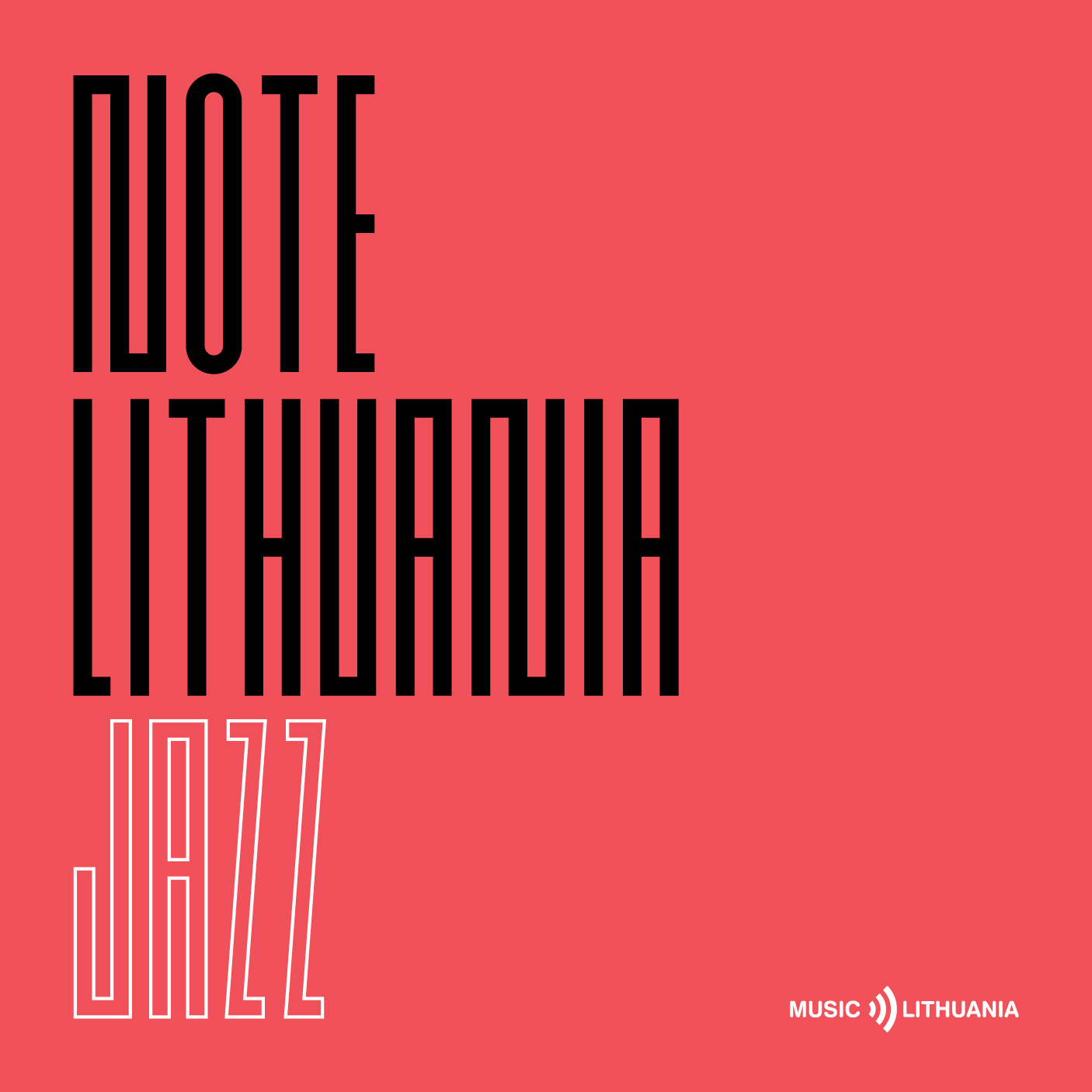 The Lithuanian Music Information Centre’s export project Music Lithuania released a fresh collection of jazz in the Note Lithuania series. The compilation will be presented at Classical:NEXT in Rotterdam, MIDEM in Cannes, and WOMEX in Santiago de Compostela. The CDs in this promotional series have been released annually since 2005. It currently boasts 20 compilations dedicated to popular music, alternative, rock, electronic, jazz, contemporary folk and world music. The Note Lithuania series is therefore not just a review of latest trends, but also a historic document that can shake cultural memory at any time. The release of Note Lithuania: Jazz 2016 was made possible due to a partial grant from the Lithuanian Council for Culture.

Jazz in Lithuania is a multi-dimensional phenomenon with a wide stylistic horizon, a rich legacy of means of expression and its own particular understanding of what constitutes entertainment. Jazz traditions in our country are being developed in their own particular way with a backward glance at the rich layers of Lithuanian musical folklore, which has come into contact with the academic music of both the past and the present, permeated with stimulating musical experiments, music that has been transformed into a distinctive world of sounds, ideas, forms and structures. Lithuanian jazz not infrequently is introverted, like the Lithuanians themselves, more concerned with internal, rather than external, matters, and so there are few entertainment genres to be found within it but rather an approach that is more conceptual and philosophical.

Historical circumstances have left distinctive traces in jazz in our country: having begun and grown already during the period of independence (1918-1940), it kept pace with what was happening in the rest of Europe, but in the 1940s went underground, becoming a particular expression of musical dissent and synonymous with creative freedom. After World War II, the ensuing Soviet occupation of Lithuania stopped the development of Lithuanian jazz for more than a decade – jazz, considered a pro-American music, was banned during the Cold War, and a disregard for this ban could result not in just the loss of one’s career but not infrequently also of one’s life.

Dainius Pulauskas Group (from left to right, top row: Dainius Pulauskas, Liutauras Janušaitis, Domas Aleksa, Kęstutis Vaiginis, Valerijus Ramoška; bottom row: Vytautas Labutis, Arkady Gotesman, Linas Būda). Photo: Vytautas Suslavičius.
Jazz music in Lithuania was to be heard again during the Khrushchev Thaw and reached real maturity and global recognition with the activities of the GTCh Trio, made up of Vyacheslav Ganelin, Vladimir Tarasov and Vladimir Chekasin. This legendary trio, which broke down not only the walls of genres and styles in their work but also the entrenched views of bureaucrats to jazz music in our country, and gave a tremendous impetus to the development of Lithuanian jazz, laid the foundations of the school of Lithuanian jazz in both the literal and figurative sense, and formed the creative and compositional principles which creators of jazz in our country are developing further.

The trio’s members, called the patriarchs of Lithuanian jazz, are still musically active today. In this compilation you will find a fragment from a concert given by Vladimir Tarasov’s Lithuanian Art Orchestra, into which he has gathered together the most outstanding jazz musicians in Lithuania. He has compared their unique voices to the threads of a hand-woven tapestry and it is out of these threads, each one irreplaceable, that the Maestro has woven his musical vision. 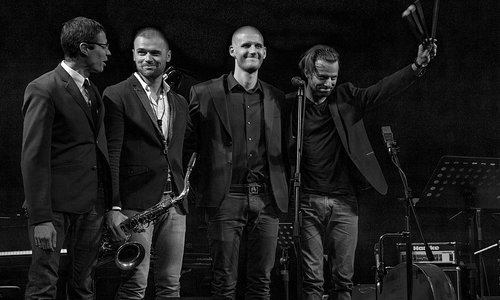 Tree Stones (from left to right: Dmitrij Golovanov, Kęstutis Vaiginis, Peedu Kass, Kaspars Kurdeko). Photo: Vytautas Suslavičius.
The vision of another creator has been successfully presented over the last two decades throughout the world by the Dainius Pulauskas Group. It was the search for thematic material, form and means of expression that led its leader, a keyboard player and the author of all the compositions performed by the group to jazz fusion, something which previously had hardly been performed in Lithuania. This musical collective of distinctive Lithuanian jazz musicians brought together by Pulauskas implement his ideas, creating a colourful musical space and bringing together in that space elements of many musical styles and tendencies, as well as the musical traditions of various countries.

Next to the cosmopolitanism of Lithuania’s jazz patriarchs you will also see the opposite tendency in the panorama of our country’s jazz – music open to the various cultures of the world intertwined with the traditions of Lithuanian musical folklore, at times weaving characteristic motifs into a jazz piece, at times connecting a folk song with the texture of jazz using the principles of collage, and at other times using direct quotations or improvising on themes from folk songs. This tendency is illustrated in this compilation by the Lithuanian folk song ‘Oh My Sister’, reworked by the trio made up of the pianist Egidijus Buožis, the classical music cellist Vytautas Sondeckis and the prima donna of Danish jazz Cæcilie Norby. 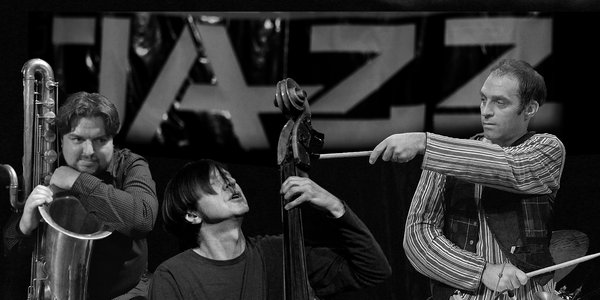 Traffic Trio (from left to right: Liudas Mockūnas, Eugenijus Kanevičius, Dalius Naujokaitis). Photo: Vytautas Suslavičius.
Another tendency characteristic of Lithuanian jazz, the conceptualism entrenched in the work of the GTCh Trio, is illustrated by one of the most interesting jazz creators of the younger generation – the pianist and composer Dmitrij Golovanov, revealed in his music as a thinker and a wit.

The younger generation of Lithuanian jazz musicians who have come to the fore with courage and determination are creators raised in a new cultural environment, in which it is difficult even to imagine the earlier ban on jazz or the dissent that existed. This is a generation which with the opening up of borders due to the reestablishment of independence gained the opportunity to study jazz on an academic level both in Lithuania and abroad, and not by listening to the crackling sound of radio programmes being jammed as Lithuania’s jazz veterans had to. This is a generation which has brought back to Lithuania new creative winds and begun a new epoch of Lithuanian jazz integration, forming groups with like-minded musicians from a wide variety of countries. Three such international collectives are to be found in this compilation: the Baltic quartet Tree Stones, the Domas Aleksa group and the Kęstutis Vaiginis quintet with three outstanding American musicians and the Turkish drummer Ferit Odman. 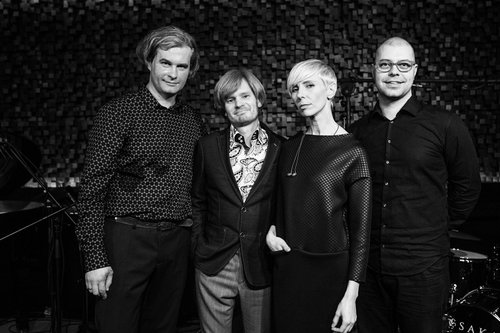 Giedrė & Jazz Miniatures (from left to right: Vytis Nivinskas, Andrej Polevikov, Giedrė Kilčiauskienė, Darius Rudis). Photo: Mantas HeadShooter.
The multi-reeds player Liudas Mockūnas, probably the first Lithuanian jazz musician to have studied abroad and who plays most often in international ensembles, is presented in this compilation with the Lithuanian ensemble Traffic Trio, in which he realizes his creative visions together with the bass virtuoso and multi-instrumentalist Eugenijus Kanevičius and the New York-based drummer Dalius Naujokaitis, brimming with vital energy.

This CD clearly shows that today’s pluralistic Lithuanian jazz is rich in original work and you will only infrequently hear jazz standards. The only piece that you will find like that on this CD is one that the group CinAmono 4, led by the young vocalist Laura Budreckytė, interprets in its own way. Another vocalist presented in this compilation is Giedrė Kilčiauskienė, who began her career performing standards but now prefers to use her own compositions. The exceptionally appealing songs of this vocalist, composer and lyricist, performed by Giedrė & Jazz Miniatures, become subtle and colourful mini spectacles, engaging jazz miniatures.

In today’s Lithuanian jazz you will find the usual nihilism of the younger generation, as well as healthy protest and a fruitful search for one’s own creative niche. The group Reinless, which came together barely two years ago under the flag of a ‘reinless’ creative fantasy, present their own brand of a mix of styles, while the provocative and intriguing trio Sheep Got Waxed with its creative output enriched by an unexpected, intriguing outburst of sound, shows that attempts to stir still waters can sometimes be very fruitful.