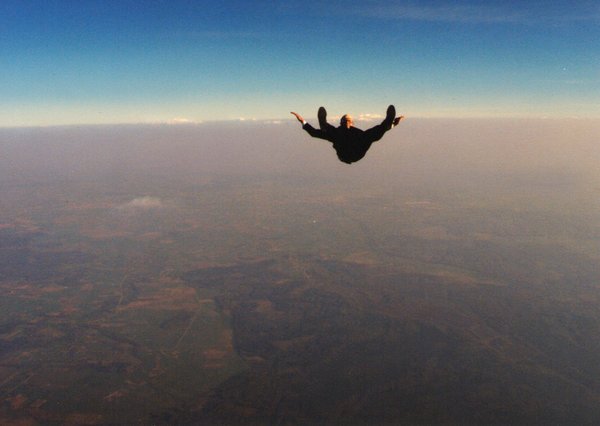 A daredevil parachute jump by the 70-year old composer in 1998 during the filming of Monika Juozapavičiūtė’s film documentary ‘Let’s Go for a Walk with Antanas Rekašius.’
It is not clear how long the music of the composer Antanas Rekašius would have lain, so to speak, on archival mattresses, cut off from public concert events and other forms of performance if not for Anton Lukoszevieze, a British cellist of Lithuanian descent and the founder of the London experimental music group Apartment House, taking such an impassioned interest in it.  Lukoszevieze has already for some time now included Rekašius’s compositions in his concert programmes and in London at the end of 2015 recorded five ‘very strange’ (to use his own words) chamber compositions by the Lithuanian author. At the end of February of this year Music Information Centre Lithuania released the CD Fonogramatika (Phonogrammar) with Rekašius’s compositions mainly from about the 1980s.

‘I had never played anything like it, it’s very mad music,’ says Lukoszevieze, in describing the CD Fonogramatika and relating how chaotic repetitions abound in it, with an exhilarating montage of sounds, bits of jazz by who knows what aliens, grotesque rhythmic machinations, mournful melodies, fragments and bits of humour, in the style of the crazy japes of vaudeville, and amongst the sinuous pitch bending – serious piano preludes like that of a clergyman unexpectedly locked up in a brothel. ‘How could music like that have come into existence,’ asks Anton Lukoszevieze. ‘Did Rekašius visit the Warsaw contemporary music festivals, with probably the most liberal musical environment in all of the Communist bloc? Did he listen to American jazz, bebop, free jazz? For example, in the piano preludes cycle Atonika one can hear something strangely similar to jazz but it is as if he had never had any contact with jazz from America.’

The performer describes Rekašius as an elemental, bewilderingly unpredictable creative personality. He was positively a schizoid type, ‘travelling’ on the sharp edges of tragicomedy. ‘In thinking about Rekašius and in looking at the filmed documentary material, I keep coming back to the idea of the clown, which is somehow close to the image of the jazz musician Charles Mingus as a clown. To tell the truth, in both Rekašius’s music as well as deep in his personality underneath the surface there lies an intensive melancholy and profound darkness. So it would be apt here also to remember the American artist Bruce Nauman’s provocative clown in action,’ commented Anton Lukoszevieze. 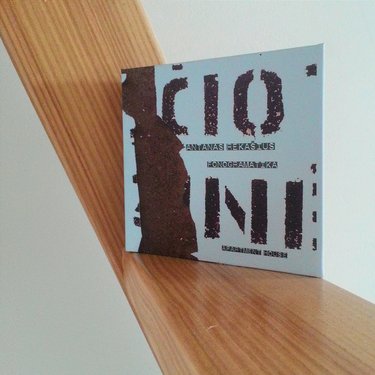 Design: Aušra Vismantaitė.
Just recently the video artist Vytautas Juozėnas filmed and, using various improvised material, put together a video presentation of Antanas Rekašius’s CD Fonogramatika during which Anton Lukoszevieze talked behind the scenes about his experience of recording the composer’s funky and mad music. Apartment House decided to use various pieces of junk metal for percussion, since the author did not specify what percussion instruments to choose from. In the composition Florescencijos (Fluorescences; 1981), the title of which reminded the performers of the Northern Lights, it was decided not to use the originally intended sound of a church organ and replace it with a synthesizer using an effects pedal and in this way to create a stronger impression of vibrating music and strange, re-imagined electrified harmonies. ‘I keep remembering the filmed documentary material I saw in which Rekašius takes an active part in the quartet’s performance, encouraging it to be theatrical, to be molto espressivo, to invest a lot of energy, and I keep thinking, was that what he was really aiming for? Perhaps one should think here not about the expressiveness of the performers but about extended techniques?’ considers Lukoszevieze.

In thinking about the structure of Rekašius’s work Anton Lukoszevieze notes that his music is made up of blocks: ‘There is no continuous development here, no hint of the classical sonata form, only compact block-like structures and in this respect Rekašius reminds one of Leoš Janáček.’ Besides which, Rekašius would regularly supplement these blocks that he had put together with indeterminate elements and in this way, according to the performer, found a perfect balance between notation and improvisation. ‘In using a free aleatoricism he, as it were, unleashed musical energy’, affirms Lukoszevieze. The composer put together the blocks of his creative material in many different ways, selecting a variety of combinations, and that is why the material itself ‘emerges’ in different places. According to Lukoszevieze, this is basically the modernist ‘cut and paste’ method and by utilising this method Rekašius was perhaps ahead of his time and the cultural environment in which he lived.

The release of Antanas Rekašius’s CD Fonogramatika was supported by the Lithuanian Council for Culture and Association LATGA. The Lithuanian Composers’ Union is a partner of Music Information Centre Lithuania.

Translated from the Lithuanian by Romas Kinka
Information from MICL