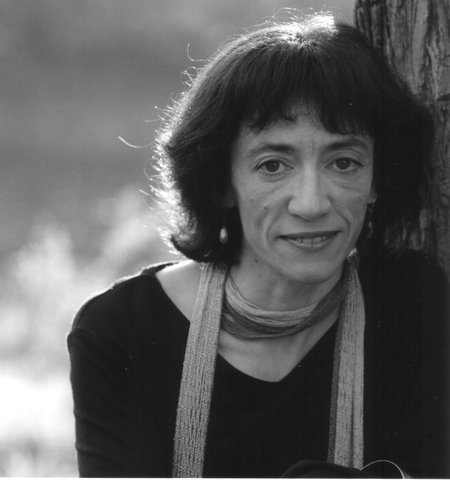 photo: Arūnas Baltėnas
In these words the well-known American musicologist Richard Taruskin tried to delineate Onutė Narbutaitė's work, after it appeared at the Icebreaker II festival in Seattle, in February 2004. At the same time, he suggested that it could well be the recipe for the music of the future.

Yet the strongest impression was made by Onutė Narbutaitė (...). Her most characteristic mode is slow, ruminative, gorgeously lyrical and utterly haunting.
Richard Taruskin, The New York Times

This took place barely a few weeks before Onutė Narbutaitė's latest and undoubtedly most important recent artistic accomplishment, Tres Dei Matris Symphoniae, was to premiere at the opening of the Musikfesttage an der Oder festival in Germany.

The religious background of this work, which relates the three most important moments in the New Testament - the Annunciation, the birth of Jesus, and his Crucifixion - inspired the composer's very subjective approach to this theme: "It is more like a symphony - or three symphonies - in which the choir, though extremely important, is but one of the voices. There is often a distancing from directly articulated canonical texts (Ave Maria, Gloria, Stabat Mater). The story, which is told, or to be more precise, experienced, via the instruments, becomes more personal and intimate - and at the same time, more universal."

As in her first opus magnus, the oratorio Centones meae urbi (1997), in this three-movement symphonic cycle, the composer draws inspiration from a multitude of experiential sources - texts, stories, images and sensations. Here, as in her Symphony No.2, the composer fearlessly takes on and masters large-scale form, which is reminiscent of slow and exceptionally intense musical narrative. One episode follows another, but within this narrative there is no sense of fragmentation; the composer uses recognisable melodies ("not something I would have probably dared to do a decade ago"), and quasi-tonal seventh harmonies, and though she doesn't seem to go beyond the limits of a traditional use of instruments, the musical fabric has an enchantingly fresh and new sound.

This intense symphonic action, over an hour long, is stunning in its musical imagery and compositional craft: it emits a metaphysical chill, frightens in its silent footsteps, enthrals with its mysterious instrumental choruses that seem to rise out of the mist, and allures with its nostalgic, slowly penetrating oboe and violin motifs, which occasionally warm up the entire musical fabric.

Onutė Narbutaitė speaks willingly about an array of images and impressions that inspired her, and refers first of all to the various forms of light - flashing sparkles, tranquil pointillistic glimmering, blindingly piercing illuminations, rays through the mist - which one can convey in music. Then, continues the composer, the music, which has its own stories 'to tell', resembles a billowing piece of fabric, which "sometimes becomes a transparent mantle, or liquid glass, or sometimes a brilliant sword, or a heavy lustreless drapery". The whole piece appears to be laced with larger or smaller musical arches, which unify all of the musical material.

The new piece Drappeggio (String Quartet No.4), commissioned by the Klangspuren Schwaz 2004 festival and dedicated to its first performers, the Arditti Quartet, is kneaded from the 'crumbs' of Tres Dei Matris Symphoniae. The title alludes to the billowing, wind tousled drapery (texture), and the arpeggio figures. The arpeggiated melody is polyphonically dispersed among all the parts of the quartet, and interrupted by rests of varying lengths, which create a hocket effect. Narbutaitė used this 'twitching' technique in Hoquetus, as well as in String Quartet No.3, but this time it returns in a gentler garb of seventh harmonies. Another composition for those who think the future of music belongs to thirds?

Onutė Narbutaitė's music continues to fascinate performers, listeners, and critics. Over the past few years, Melody from Symphony No.2, eulogised as "charismatically melancholy hymn" by Richard Taruskin, has become one of the most frequently performed Lithuanian pieces. This year, the composition also enraptured producers of public radio stations at the 51st International Composersy Rostrum in Paris, where it was awarded first place on the list of recommended works. Melody was chosen for the ISCM World Music Days festival in Switzerland, where it will be performed, on November 11, by the Berner Symphonie-Orchester, with Peter Hirsch conducting. The composer's future plans include another symphonic composition, commissioned for the "musica viva" concert series of Bavarian Radio. Its premiere is slated for the spring of 2005.