Now you’ve just opened the twenty-fifth issue of the publication. Quoted above are the sentences written by then-head of the organisation Daiva Parulskienė, for the launch of what was a modest four-page newspaper making its debut in 2000. Inaugurated mainly with a similar Swedish publication in mind, it doubled in size, to eight pages, four years later. Between 2000 and 2009, it was published semi-annually, 2008 being the sole exception when the 18th issue of World New Music Magazine, dedicated to Lithuanian new music, was released instead of the newspaper during the ISCM World Music Days in Vilnius. Andreas Engström and Rūta Stanevičiūtė worked as the editors of the magazine back then.

The Lithuanian-language and English-language versions of the publication offer an intriguing, if not entirely random, pun in their titles. In Lithuanian Music Link, the last word stands for ties and relations between Lithuanian music and the world, while in Lietuvos muzikos link, the same four letters mean “towards”, which in this case might suggest the gradual discovery of Lithuanian music by the world.

Initially, nobody had the slightest idea if there’d be sufficient funding and resources to publish the newspaper more than once. Despite that, the prevailing notion was that it should appear in both English and Lithuanian. The first five issues, however, were exclusively in English (both printed and online versions), while the sixth issue’s online edition was already bilingual. That was published in 2003, so we’ll have an excuse to mark yet another anniversary in 2023.

A several-year break followed, but in 2015 LML was brought to life again, mostly due to Asta Pakarklytė, the tireless new head of the Music Information Centre Lithuania. The revival coincided with a period that saw a number of other music information centres discontinue their magazines and other periodic publications, at least in printed form. Currently only two other similar periodicals survive in Europe, the Czech Music Quarterly and the Finnish Music Quarterly.

The format of LML also has changed: the semi-annual newspaper has turned into the ~60-page illustrated annual magazine.

During the early stages, the newspaper was edited by Veronika Janatjeva, Daiva Parulskienė, Linas Paulauskis and Jurijus Dobriakovas. After becoming a magazine, Lina Navickaitė-Martinelli, Asta Pakarklytė and Ilmė Vyšniauskaitė worked as editors. Some of them later took on important positions in culture and politics, including Daiva Parulskienė, who was Lithuania’s attaché for culture in the United Kingdom, and Lina Navickaitė-Martinelli, who has been in charge of the Musicologists’ Section of the Lithuanian Composers’ Union.

Radvilė Buivydienė, the current head of the Music Information Centre Lithuania, and Emilija Visockaitė, the former editor of mic.lt, are in charge of the twenty-fifth edition of the magazine.

In the beginning, the publication focused almost entirely on living Lithuanian composers, but since 2004 the concept has changed somewhat to accommodate articles covering – and revitalising as it were – the country’s classical composers and their works. Two years on, the thematic spectrum broadened further to include other types of music, such as electronic, pop, jazz, hybrid forms of folk, etc. Now the magazine aims at embracing the whole variety of music created and performed in Lithuania. 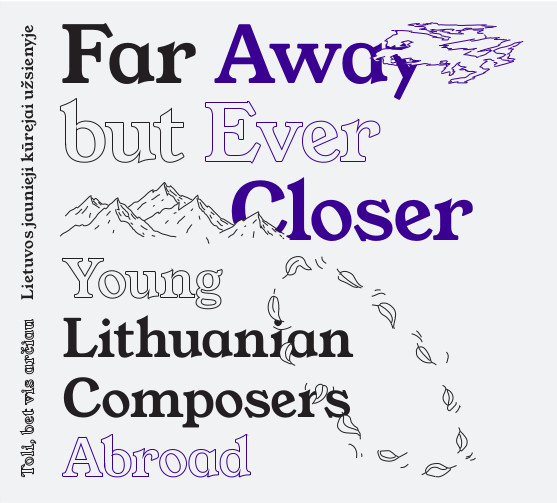 Several of the magazine’s articles have evolved into musical projects, one example being a 2016 review by musicologist Edvardas Šumila of young Lithuanian composers living and working abroad; a CD album containing some of their music was released later. Edvardas Šumila’s 2019 article on Jonas Mekas, the Lithuanian filmmaker and artist who spent most of his life in New York, developed into an international event produced by the author, a series of performances and other cultural events marking Mekas’s centenary.

The editors have each brought in their own visions and ideas. The aforementioned Ilmė Vyšniauskaitė suggested adding QR codes next to the articles in the printed version of the magazine; by scanning them the readers can listen to the music written or recorded by the composers and performers the article is dedicated to. She also advocated for an innovative design, complete with drawings by the authors of the texts, to raise the publication, as it were, to the level of an artistic artefact. (No. 24 was designed by Iris Loi, while between 2015 and 2020, Tomas Mozūra was in charge of design; he replaced Liudas Parulskis who worked from 2000 to 2009.)

Editors and designers were free to bring forth their innovative ideas partly due to the fact that the concept of the publication has never been constrained by commercial advertising, which, in turn, was unnecessary due to financial support from public institutions. In recognition of its role in helping boost the exports of Lithuanian music, the publication has been financed by the Press, Radio and Television Support Foundation, the LATGA Association, the Lithuanian Council for Culture, and the Ministry of Culture of the Republic of Lithuania.

A number of musicologists, performers and other music experts have been collaborating with Lithuanian Music Link as authors, their geography gradually expanding. Recently, the magazine has published articles written by Dāvis Eņģelis from Latvia, Martin Anderson, Anton Lukoszevieze and Christopher Lyndon-Gee from the United Kingdom, and Theo Triantafyllou from Greece. In the current issue, the review of Lithuanian albums has been written by Tayeb Al Muhammad, a Syrian now based in Vilnius.

This time, the magazine offers a yet another, if minor, innovation by presenting two, rather than one, portraits of young Lithuanian musicians, Monikaze and Free Finga. Other themes include an overview of the nation’s major performers of new music; an outline of the not-so-easily-detectable manifestations of traditional Lithuanian culture in contemporary compositions; music events at derelict military sites; and an inquiry into what’s really going on inside a former prison in the heart of Vilnius, the location for the fourth season of the TV series Stranger Things.