Vytautas Barkauskas: the symphony for the new millennium

Two 'big dates' of life and career have fortuitously coincided this year for Vytautas P. M. Barkauskas, who celebrated his 70th anniversary and a half-century of creative career with the portrait concert of his orchestral works (Konzertstück No.2 and Viola Concerto) and a world premiere of the Sixth Symphony. Another highlight of the anniversary concert was the Russian violist Yury Bashmet who was specially invited to perform Barkauskas' Viola Concerto with the Lithuanian National Symphony Orchestra under the baton of Robertas Šervenikas. 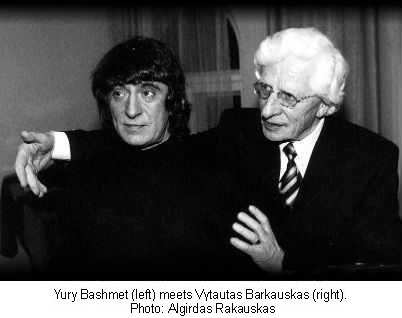 'The Sixth Symphony has not been commissioned to me by anybody. I have begun working on it thinking of not only upcoming new century, but a new millennium', says composer of his latest work. Described by the Kieler Nachrichten reviewer as 'an excellent virtuoso of composition', Vytautas Barkauskas does not conform to any existing compositional school of the 20th century. He designed his personal style by synthesizing principles of tonality and serial technique. At the center of composer's focus is the expression of emotion, timbral sonorities and concert nature of music. Multi-layered texture, micro-polyphony, polyrhythm, polydynamic articulation and a strong intuition for musical drama - this is a precise description of the style and nature of Barkauskas' oeuvre. After composing five symphonies, the composer is sometimes advised by some of his colleagues not to get infected with 'symphomania'. The composer, however, follows his own vocation, arguing that 'the symphony genre lends well to my favourite principle of synthesis, allowing to combine serialism and tonality in broad strokes. In addition, searching for timbral diversity of expression, I have significantly expanded the percussion section in the three-movement symphony that lasts approximately 35 minutes'. As if precipitating this year's events, in late 2000 and early 2001, Vytautas Barkauskas' works have been granted notice in two international competitions. His Concert Etude No.1 was voted the best national composition at the International Piano Competition 'Konzesteum' in Oravrona, Greece. On January 14 this year the symphonic work At the End is the Beginning received the Second Prize at the International Competition of Symphonic Music 'Sinfonia Baltica' in Riga, Latvia. When asked what is essential for him today, the composer replied: 'I seek to win a place in a concert repertoire, offering joy of music making and interpretational freedom. I wish to be heard and understood not only by listeners of some elite festival of contemporary music, but also by everyday concertgoers. In general, I strive to be faithful to myself in search for quality and expressiveness in music'.