Lithuanian music is not anymore entire terra incognita to the British audience and music professionals. Among the recent discoveries on the initiative of music organizations in Britain was appearance of Bronius Kutavičius' music in the Vale of Glamorgan Festival, where his oratorios and chamber music works were programmed twice, in 1996 and 1999. In 1999, British company ASV (CD DCA 1063) released an exciting collection of Osvaldas Balakauskas' chamber music works, among them Like the Touch of a Sea Wave for violin and piano, described by the Gramophone reviewer as 'a delicate example of musical post-Impressionism'.

The Royal Academy of Music in London and its professor assistant Tamami Honma caught up initiative of displaying Lithuanian repertoire on the British music scene. In conjuction with the Lithuanian Embassy and the Lithuanian Composers' Union, last year she organized New Lithuanian Music and Art: A Closer Look, a concert dedicated exclusively to Lithuanian music, which combined recent Lithuanian chamber music with an exhibition of new Lithuanian art.

The success of that evening inspired the next series of events called A Day in Vilnius, which 'invaded' the Royal Academy of Music in the beginning of May this year to give another deepening experience of vivid and diverse Lithuanian musical landscape. Introductory talk of the composer Mindaugas Urbaitis was followed by the vocal recital of Lithuanian mezzo-soprano Judita Leitaitė and pianist Indrė Petrauskaitė as well as the evening concert in the Sir Jack Lyons Theatre introduced by the British and Lithuanian musicians. Among the featured composers special emphasis was given to the Lithuanian-Jewish composer Anatolijus Šenderovas and his emotionally vibrant chamber compositions, some of them filled with soft sadness, like Songs of Shulamith or M. K. Čiurlionis' Sketches, others, like Da capo al..., loaded with strong rhythmic tensions and confrontation. 'I was familiar with composer's explicitly Jewish idiom, which very effectively blends two different music traditions - says British music critic Martin Anderson, - but I was unprepared for his percussion solo piece Da capo al... I am conventionally sceptical about music for solo percussion: necessarily it survives on rhythm alone, and it is very rare to find a piece wich effectively exploits a genuinely musical idea. But Da capo al... - which takes as its material the gradual invasion of a quaver pattern by semiquavers - did so completely convincingly, and reveal another facet of one of Lithuania's most intriguing composers.' 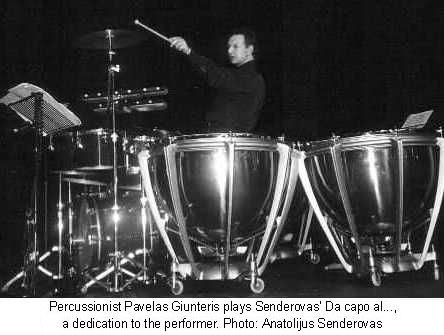 Music of Anatolijus Šenderovas fascinated the audience with the colour of traditional Jewish chants pervading the stock of his compositions, subtle fusion of instrumental timbres, and improvisatory manner of performance free from rigid textual constraints. All those qualities make music of Anatolijus Šenderovas sound very natural and touching. Indeed, the way composer communicates his message usually receives a warm reception from the concert attendees. Public, who filled Sir Jack Lyons Theatre in the Royal Academy of Music in London, was no way an exception.