2010 will be full of new and extensive musical routes for the composer, sound and visual artist Arturas Bumšteinas. Continuing his collaboration with the British ensemble Appartment House who will premiere his Studie Zwei (55 Years Later) on February 22, at the UEA’s School of Music in Norwich, he will also perform with different international collectives founded by himself. One of them – Works and Days Ensemble – will appear at the Angelica Festival in Bologna, on May 12. Their program includes Bumšteinas’ new electronic works Nocturne, Llull and Hszcz, which will be intertwined with acoustic parts and improvisations delivered by Arturas Bumšteinas (piano), Ilja Belorukov (saxophone), Tadas Žukauskas (violin), Anton Lukoszevieze (cello, kanklės), Seth Josel (electric guitar, banjo) and Saulius Astrauskas (percussion).

On May 15, at the Kunstvlaai art fair in Amsterdam (where he will represent the artists’ house HotelMariaKapel), Bumšteinas starts his new project My Own Private Bayreuth. He came up to this idea after an ussuccessful attempt to acquire tickets to the Bayreuth Festival. According to the official answer from the festival organizers, he will have a chance to get there after nine years only. Shockingly surprised by such cultural super-elitism, the composer devised how to use these remainding nine years in a creative way. Hence this project is an attempt to create an alternative, own Bayreuth in a tiny space of few square metres – an improvised recording studio. During the week of the fair, he will meet different musicians and record them playing fragments of Wagner’s works. And thus an archive of Wagner’s interpretations will be built, to serve as a material for Bumšteinas’ new compositions.

However, Bumšteinas’ residence in his own private Bayreuth will be interrupted for a couple of days when he will move to Poland, to present his New Anthem of Sylt at the Codes Festival in Lublin (on May 17). The composition was conceived during Bumšteinas’ stay at the artists’ house Kunstraum Styl Quelle, in the German isle of Sylt. Here he uses ancient Greek scales, certain contrapuntal devices which are close to the ancient Lithuanian polyphonic songs sutartinės, and the text of the insular anthem of Sylt which is sung in the North Frisian dialect. New Anthem of Sylt will be premiered by the quartet of multi-instrumentalists which includes Natalia Kawałek (voice, piano), Kęstutis Pleita (viola, electric guitar), Tadas Žukauskas (violin, bass guitar) and the composer himself (harpsichord, tam-tam, electronics).

Organ Safari is Bumšteinas’ another large project which was started in 2008 in Lithuania, and is constantly expanding and evolving. Its follow-up, Stories from the Organ Safari, will be presented at the Holland Festival in Amsterdam, on June 23. Traveling around Europe, the composer records sounds of the organs in churches, concert halls, record stores, music schools, again forming huge audio archive for his future work. For the Holland Festival, Bumšteinas invited a group of musicians (Anton Lukoszevieze, Goska Isphording, Antanas Dombrovskij) who will play two-hour long spatial music performance, employing all organs of the Orgelpark venue along with other acoustic and electronic instruments. During the performance, the listeners will be free to walk around and see the exhibition of Bumšteinas’ audio-visual works.

And this is only part of his busy schedule for 2010. Other upcoming events include shows at the Wigry Arts Centre in Poland, on July 17 (with the Polish-Lithuanian group led by him), and at the Sonic Circuits Festival in Washington, on September 21 (with the American neo-folk duo Janel & Anthony); residence at the artists’ house Krems in Austria in October; performances of his laptop quartet Twentytwentyone in Poznań, Poland, on June 11, and at the Concertgebouw in Bruges, on November 12; and other concerts, exhibitions of his visual art, recording sessions and collaborative projects. 2010 will also see at least three CD releases of his music: My Own Private Bayreuth (co-release with HotelMariaKapel), Organ Safari, and Heap of Language (this release by the Polish label Bôłt will feature a selection of Bumšteinas’ orchestral, chamber and electro-acoustic pieces). 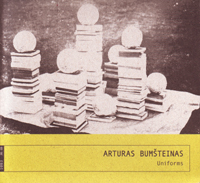