A Welcome Addition to the Contemporary Composer Series

Even if one’s pieces are performed live around the globe, having them finally released in the CD format – especially if it is one’s first official record – is still an immensely important achievement. While a live performance undoubtedly is an exciting and emotionally rewarding event, a record is a document that further adds to the composer’s symbolic status.

That is the case with Marius Baranauskas and Raminta Šerkšnytė – two very distinct voices heard within the younger generation of Lithuanian composers. One couldn’t say they are still making their first steps in the world of contemporary music; on the contrary, many of their older colleagues could probably be a little bit jealous of their precocious recognition. Baranauskas’ and Šerkšnytė’s works, having earned them various prizes both in Lithuania and abroad starting from their academy years, are performed regularly at the local and  international festivals. That can be taken as a sign that their music is current and needed today.

The CDs containing the two composers’ trademark works, which became a long-awaited addition to the Contemporary Composer series in the end of 2007, reveal even more: that Baranauskas’ and Šerkšnytė’s music is going to be valuable and worth listening to tomorrow as well. 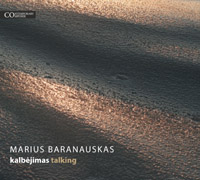 The highlight of Marius Baranauskas’ portrait CD titled Talking is the eponymous symphonic piece written in 2002 and still regarded as the composer’s strongest composition. It is precisely this piece that earned Baranauskas the 3rd prize of the prestigious Toru Takemitsu Composition Award in 2004 and was performed during the ISCM World Music Days in Croatia a year later. Baranauskas’ electroacoustic oeuvre – undoubtedly the domain, in which he feels most comfortable – is given a prominent position on the disc, including his ethereal, otherworldly Let (2004) and Five Dreams About Metallic Fog (2005). In addition, there is the chamber piece A Song for Space (2005) and the symphonic The Molten Thought (2006), representing the acoustic side of his work.

As these pieces vividly demonstrate, voice as a musical phenomenon is the central element of Baranauskas’ music. Even when no words (the composer, for whom literature often serves as a point of departure, obviously has a personal connection with Rabindranath Tagore’s texts)and no actual human voice are employed, the music itself acts like a semi-articulate voice. The voice-derived timbres are the main building block in this process of ‘anthropomorphisation’ of music, which results in an impression of some transcendental being talking through Marius Baranauskas’ music. 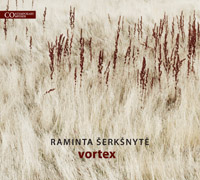 In contrast, Raminta Šerkšnytė’s expressive music, as presented in her Vortex CD, is more about awe-inspiring imaginary landscapes that resonate with dramatic tension – be it Iceberg Symphony (2000), Vortex (2004), De profundis (1998), or Mountains in the Mist (2005). The latter, by the way, was performed during the ISCM World Music Days in Hong Kong in 2007. On the other hand, the four-movement Oriental Elegy (2002), inspired by a poetic film of the same name by Aleksandr Sokurov, while still informed with a particular ‘sense of place,’ is far more restrained and meditative, as if justifying its title.

Sonically, Šerkšnytė is an acoustic purist, writing mostly for chamber ensembles, though the mentioned Iceberg Symphony and Mountains in the Mist – impressive examples of her ability to control both musical form and the emotional content of music – are written for symphony orchestra. This doesn’t make her music sound the least bit outdated, however. The very fact that Raminta Šerkšnytė’s music has been performed in 16 countries besides Lithuania (where it enjoys a permanent place in the repertoires of some of the best performers) seems to speak for itself.