"It's a heady brew, caught in atmospheric sound", wrote the BBC Music Magazine reviewer Julian Haylock and marked four stars for the performance quality of the new release of Vytautas Barkauskas' works on the British label Avie Records. This CD showcases the concertante works of Barkauskas, featuring two musicians to whom these works owe their existence.

The creation of this CD began from the visit of the French violinist Philippe Graffin in Vilnius in 2002: "I have always associated Vilnius with two things – the birthplace of the legendary Jascha Heifetz, and also a composer named Vytautas Barkauskas, whose best-known work for solo violin, Partita, I have loved since I was a teenager. When the opportunity came for me to give a concert in the Lithuanian capital, I went in search of both." Of Jascha Heifetz's birthplace he found just tumbledown remains; but the meeting with Barkauskas resulted in a new violin concerto for Graffin, which was eventually premiered at the St. Nazaire music festival under the title Jeux in 2002. Included in this CD is the recording of its Lithuanian premiere in 2003 with the Lithuanian National Symphony Orchestra under Robertas Šervenikas. After winning the National Arts and Culture Prize for Jeux the same year, Barkauskas received a commission from the Vilnius Festival to write a new concert piece for the Vilnius Festival Orchestra. With his newly found congenial collaborator, Philippe Graffin, in mind, Barkauskas wrote a double concerto, Duo concertante for violin, viola and orchestra in 2004. Its world-premiere recording, also included in the CD, features the leading Japanese violist Nobuko Imai to whom especially Barkauskas wrote a new version of his Two Monologues for viola solo (1983/2004). Entrusted with the afterlife of these delicate viola miniatures, Imai gave their first performance at the Schiermonnikoog festival in Holland in 2004. 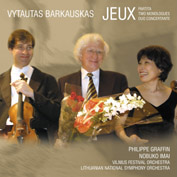 ...rarely has the Partita's coruscating changeability sounded so radiantly beguiling. Barkauskas composed Jeux 36 years later, a 20-minute, multisectional concerto-in-all-but-name, especially for Graffin. Here the Frenchman's sensuous, golden sound, quicksilver reflexes and heightened sensitivity to colour really come into their own as wave upon wave of ear-tweaking textures and timbres roll past the listener, the occasional brilliance of the writing tempered by a palpable sense of sadness and regret. The solo viola Monologues inspire the work's dedicatee, Nobuko Imai, to give of her very best, voicing the music's hauntingly introspective gestures with a transfixing improvisatory freedom. The double concerto offsets Bartók-like moto perpetuos of hurtling momentum with gentle music of nostalgic serenity, that (...) combines Japanese fastidiousness with French sensuality.
Julian Haylock, BBC Music Magazine

The use of a French title, Jeux, links the concerto with the Gallic culture, and there is a sense of fun contained within the elegant writing and subtle orchestration. It has taken as its starting point Graffin's silvery tone and while avoiding overt virtuosity it explores his left-hand dexterity as it dives around the fingerboard. The vast range of colours that Graffin conjures up is put to use in the music's ever-changing moods. (...) Graffin adds, by way of encore, a superb account of the Partita for solo violin. Two Monologues for solo viola are equally demanding, though played with apparent ease by Nobuko Imai. The two soloists come together in a fascinating Duo concertante, in which busy rhythms are juxtaposed with passages of sleepy tranquillity and the score unfolds in a series of musical conversations leading to a hectic and exciting finale.
David Denton, The Strad