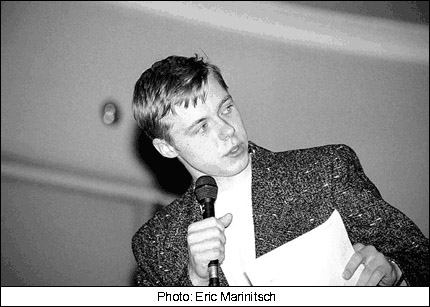 Creative intensity, the music that communicates, that causes dialogue between artist and audience - these were the main criteria for Eric Marinitsch, responsible for artistic promotion and audio-visual division of the music publishing house Universal Edition AG, when selecting 10 young composers for BIG Torino 2000 International Biennial Festival of Emerging Creativity, which took place in Turin in April and May. The youngest among the selected - Vytautas V. Jurgutis, one of the most distinguished young composers in Lithuania.

In spite of young age, Vytautas V. Jurgutis astonishes his audiences as an integral personality, who achieves the genuine expression in his music through the amalgamation of styles and sensitivities (composer describes them as perpetual 'integration of archaic and new manifestations'), interior communication and dynamic musical form. Composer's aspiration to communicate with the audience led him to the interactive crossover play with the pop music elements, especially contemporary dance music (G.A.L. House) and additional use of multimedia possibilities. According to Eric Marinitsch, 'Musical passages of the 'fractal' origin by Vytautas V. Jurgutis accompany the listener long way to the decisive final point of intersection among evocative sensations and felicity of intellect'.

During the BIG Torino 2000, the young composer has participated in the master class, where he gave a detailed presentation and illustration of his early string quartet Depth of Eternity (1995) and electronic composition Sticky Rhodes (1996). Performances at the Giuseppe Verdi Conservatory during the festival included his recent compositions Zoom (1999) and Fractals (1999) performed by the Ensemble Europeo Antidogma Musica under the baton of Yoichi Sugijama and Leonardo Boero. This year Vytautas V. Jurgutis wrote his first symphony, which has been recently recorded by Lithuanian National Symphony Orchestra.

Zoom was written at the beginning of 1999 and premiered in Vilnius with the support of The Westerly Trust (London). In the composition for string quartet, double-bass and harpsichord, harmonic aspects prevail over the rhythmic ones. Expression of the composition is achieved through the fluctuation between the consonant chords and microtonal sound structures of strings, and expressive passages of the harpsichord. Part of the latter in the first and third part is put down in the manner of restricted aleatoric.

Fractals for two flutes, saxophone, violin, cello, marimba, two keyboard instruments, electric guitar and bass guitar was specially written for the ensemble Icebreaker (London) and premiered at the Gaida Festival in 1999. According to the composer, 'characteristic of this work is the pleasure in the experience of sound. Using the simplest elements of music (diatonic scale, six main rhythmic qualities) I tried to create a dynamic musical structure that would convey the harmonious relation between material and pure idea.'