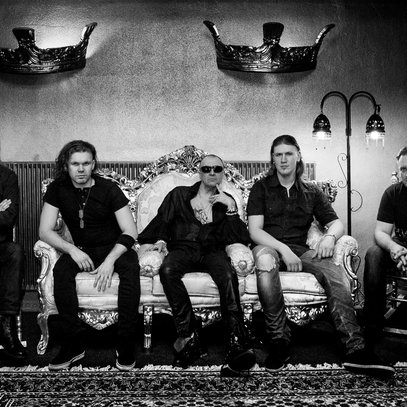 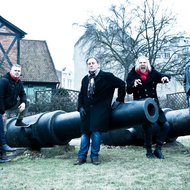 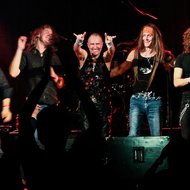 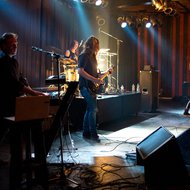 SBS (Spicy Bits of Scandal) are among the true heavyweights of the Lithuanian hard’n’heavy scene. Formed as early as 1979, when heavy metal was perhaps the major direction of the global hard rock scene, and taking influences equally from genre-defining mammoth acts like Black Sabbath and guitar virtuosos like Y. J. Malmsteen or Royal Hunt, SBS was active for 20 years before going on hiatus in 1999. In 2005, however, the band was back on stage and full of creative plans, much to the delight of fans of classic heavy metal. Instead of brutal force and gruesome themes, SBS opt for virtuosity, technical performance and atmospheric melodicism resembling progressive rock, yet retaining the essential heavy metal attack. The band has plenty of festival performances and warm up shows for heavy metal grands like Judas Priest to their credit.

SPICY BITS OF SCANDAL, also known as SBS, history begins in the year 1979, when vocalist and keyboardist Vilius Kraujalis and guitarist Darius Rutkys, decided to form a rock'n'roll band. Right from the start the band was influenced by DIO, ROYAL HUNT, Y.J. MALMSTEEN, BLACK SABBATH and WHITESNAKE. Shortly drummer Girėnas Medziukas and bassist Rolandas Buidovas (R.I.P.) joined SBS.
In 1982 the band started playing hard rock. The year 1985 saw the band adding a second guitarist Mikaelis Feigelovičius, to their lineup. In the year 1988 SBS played in the festival „Rock Saeits“ in Riga and after a year in „Junewalija“ festival in Poland. 1991 saw the quiting of Vilius and Mikaelis. Soon the band  completed their lineup with guitarist Tomas Varnagiris, keyboardist Naglis Patamsis and vocalist Vitalis Kairiūkštis. So, in 1992 the band was on stage again: they played in Pasvalys, Nida, Alytus and other big cities. Later Rolandas was replaced by Jonas Aleksa, and Naglis by Jovaras Čivas.
In 1996 SBS releaced an MC - „Mėnulio Šviesa“. There were nine compositions writen by Vilius, Tomas and Vitalis. Founder Vilius Kraujalis was back in the band. The recording was initiated by „Pūkas“, along with producer Giedrius Litvinas. After the release activity stiffed. In 1999 the band celebrated their twentieth anniversary in the biggest Vilnius club - „Karolina“. On stage SBS was congratulated by REBELHEART, Povilas Meškėla and Šaras (POLIARIZUOTI STIKLAI).
After a five year pause, in 2005 the band was back again. This time – specially for the internetional festival „Roko Naktys – 2005“. On stage SBS was with a different lineup: Vitalis Kairiūkštis (vocals), Vilius Kraujalis (keyboards/vocals), Tomas Varnagiris (guitar), Martynas Garbačas (bass guitar) and Šarūnas Venckus (drums). After the festival, the five decided to play on. The band was choosed to open for ROYAL HUNT in their concert in Vilnius (October 21th 2005), sadly the show was canceled. But every cloud has its silver lining: heavy metal monsters JUDAS PRIEST choosed SBS to open for them in their concert in Vilnius (December 3rd 2005.). This show was recorded and in the begining of 2006, releaced as a live album „Gimęs laimėti“, including five brand new songs (one of them - „Žaidėjas“ became a mega-hit) and a concert from „Roko Naktys – 2005“ festival in DVD format, which was filmed by Nation Lithuanian TV.
The start of 2006 saw the quiting of guitarist Tomas Varnagiris, witch was replaced by a talented youngster from the Lithuanian modern metal band LINFENG (also played in XESS) – Giedrius „Jumbo“ Balčiūnas (he is the only musician in eastern Europe which has a endoresment from Hammer guitars and Zoom).  The new lineup debuted in „Roko Naktys – 2006“, where besides SBS was „Uriah Heep“ and „Lucifer‘s friend“ ex-vocalist John Lawton. The band's show was well valued by mass media.
In April 2007 SBS released their next album „Tik mėnulio šviesa...“, witch was well evaluated by the biggest german webzine „HardHarderHeavy“. The new release got 6 out of 7 and in the REVIEW TOP 15 with 342 votes stood in the second place, after MANOWAR, but outruned PINK CREAM 69 and SAXON.
One of the biggest SBS projects will be „Diagnozė: SBS“, whitch will be a big suprise for the Lithuanian music industry. In autumn SBS will begin recording their third album.