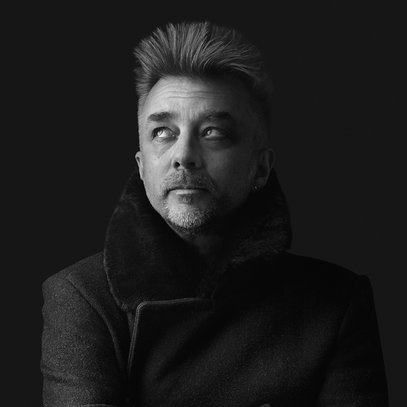 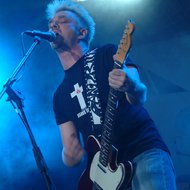 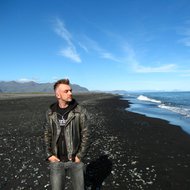 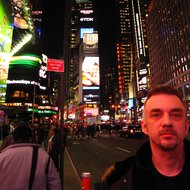 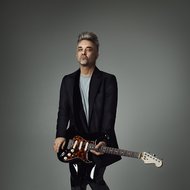 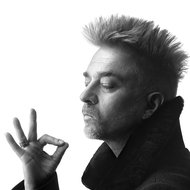 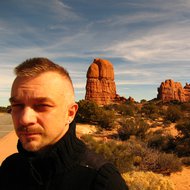 A household name in Lithuania, Andrius Mamontovas has been charming audiences with his recipe of melancholic rock for two decades now. A crowd of 60 000 gathered to witness the last show of his now legendary band Fojė in 1997 and his ongoing solo career is impressive. Getting his umpteenth gong at Bravo awards (Lithuanian equivalent of Grammy) has become a routine for Lithuania's biggest and most charismatic rock star who is also carving a career path as a music producer and actor (playing the main part in the internationally acclaimed theatre performance of Hamlet directed by Eimuntas Nekrošius). Managing to keep an unparalleled level of popularity is not a difficult task for Mamontovas, who has toured most of European countries, Canada and the Having shared the stage with Bryan Adams and Sting, in 2006 Andrius signed a publishing deal with a U.S. based Forman Bros. label and is currently in the process of recording his second album in English. Andrius made 2006 an eventful year: two solo albums, several collaborations with other artists and a jaw-dropping Eurovision project LT United proved that this rock veteran is still very much in the game.

Is This the Rain?

X
Is This the Rain? music and lyrics: Andrius Mamontovas

In 1983, Andrius Mamontovas began his musical quest by forming FOJĖ, one of the most popular bands in his homeland.  From 1983 to 1997 the band released 14 successful albums and won every possible music award. The last concert of FOJĖ in 1997 gathered more than 60.000 fans, still all time record in Lithuania.

After FOJĖ was disbanded, Mamontovas began his solo career and since then has released 10 solo albums and 1 DVD "TV Dainos". Andrius currently holds 15 BRAVO awards (the Lithuanian equivalent to the Grammy) for the nominations "best song", "best album", "best show", and "best act of the year".

In 1997, Andrius was invited to play a leading role in Hamlet, directed by one of the most renowned theater directors - Eimuntas Nekrošius.  The powerhouse play is still on world tour and has been performed over 180 times to date. Mamontovas has also written soundtracks for several short films, and music for theatre production "Ivanov" by Chekhov (directed by Eimuntas Nekrošius) at the Teatro Argentina in Rome (Italy).

In 2004, Mamontovas was invited to close the festival by the Brandenburg Gate in Berlin, dedicated to the European Union enlargement. He also shared the stage with such artists as Sting, Bryan Adams, and Sugar Cubes. Mamontovas has served as a producer and songwriter for fellow artists as well.

Andrius recently formed a new band, LT UNITED, to represent Lithuania at the Eurovision Song Contest.  Their song We Are The Winners was an instant success and has achieved much recognition. The band has gone on to record and release other tracks, and in 2006 has performed in the venues of Ireland, Germany, Iceland, among others.

Mamontovas continues to pursue recognition worldwide and was recently signed to Forman Bros. Recordings based in California.  His first official English language recording, Cloudmaker, shows a vast range of interest and skill when it comes to his English language career. He is currently in the process of writing new songs to complete his new recording project.