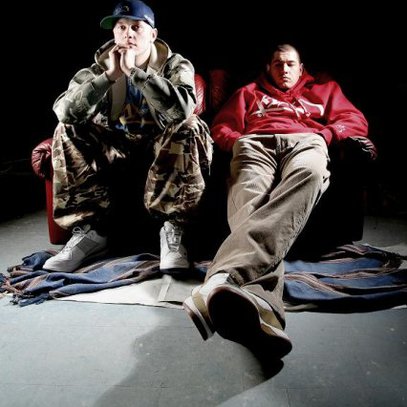 Formed by experienced rappers Deiwuzas (ex-Kitokie MC) and Yga (ex-Da Manifest), Legato is Lithuania‘s first hip hop 'supergroup'“. Never forgetting the fun element, the duo offer a fresh alternative for 'gangsta' posing of some competitors and they are a brilliant live act too, having an experience of performing in Latvia and Russia under their belts. Legato‘s debut album Po viena saule (2006) features diverse talents of Lithuanian rap star Pushaz (of G&G Sindikatas) and jazz chanteuse Julija Jačėnaitė – the CD got positive reviews and several songs of the album climbed the radio charts. ‘Our songs are simple thoughts of humble guys, reflecting on life’s values and problems’, - Yga and Deiwuzas claim. Following Deiwuzas’ several months stay in the duo is back together now, developing ideas for their next album.

"Our music is our thoughts about values and problems in daily life, about phenomenons and feelings which are familiar to everyone - good and evil, love and hatred. Many songs are based on our experiences and real stories of life." This is the point where the biography of Legato starts.

Soon the band was signed by a new label U-Sound (dedicated to urban music) and was released their first single Verpetas with the young r'n'b singer Austėja. The song became popular among the Lithuanian hip-hop fans, and was played in various radio stations. The first Legato album Po viena saule was released in 2006. The radio singles Viskas ore, Krantai, Po viena saule did not go without notice and Legato was nominated as “The Group of the Year”, “The Album of the Year” and “The Song of the Year” at the Lithuanian Hip-hop Awards 2006. The biggest radio station in Lithuania "Radiocentras" nominated the band as "The Alternative of the Year".

Some time ago Legato released the new single Kai tu skaitai from the following second album.