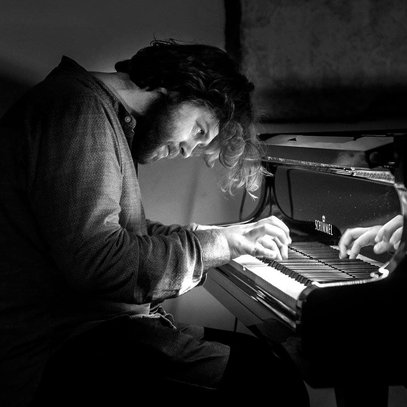 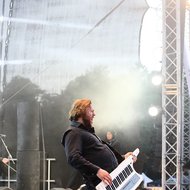 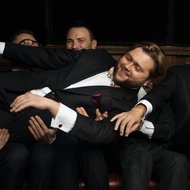 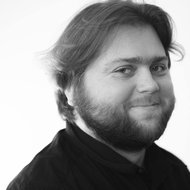 Vytis Smolskas is a musician who plunges into the sea of sound as if it were a gyre of fantastic adventures where no chances are to be missed. He gives the nod to the night of jazz standards, says ‘yes’ to alternative (and often genre-less) music projects, accepts ‘a solo recital’ challenge, and dabbles in tango, disco and electro. A true chameleon and a human ‘soundboard’, he is capable of musical phrasing of any content – whatever you may wish for – and yet never loses his individual, vivid character. When he joins a band as guest artist, he goes halves on the spotlight with the soloists, and sometimes steals the show entirely.

Vytis Smolskas (b. 1983) is a pianist, keyboardist, teacher, composer and an active contributor towards innovative projects. He is often considered to belong to the realm of jazz, but his music reverberates far beyond.

M. K. Čiurlionis School of Art became his window into the world of music. He studied with J. Miglaševskaja, J. Karosaitė, L. Drasutienė, D. Račys and M. Lapėnaitė. As a student, he successfully participated in international competitions in Lithuania and abroad. He received third prize at the London International Piano Competition and second prize at the A. Rubinstein Competition in Paris. In 2002, after exploring and becoming quite fluent in the language of improvisation, he began his studies at the Lithuanian National Academy for Music and Theatre, where he studied classical piano with Petras Geniušas. Years between 2002 and 2007 were the breaking point in his life and the moment of great strain in his artistic development. He led a double life, where he played Bach’s fugues and Chopin’s etudes during the day, while at night he was accummulating a different kind of performing experience – rehearsing with the electro-punk band Pieno lazeriai or attending jam sessions.

After graduating with the BA in piano performance, the musician took a different career path and began his studies at the newly established jazz department, where he was mentored by prof. Artūras Anusauskas. In 2010 he received his second BA in jazz piano, and afterwards he pursued his Master’s at the Royal Conservatory of the Hague (2010-2012), where he was a student of Jasper Soffers.

Vytis Smolskas’ style of playing combines the superb qualities of a jazz adept (quick reaction, organic integration with the ensemble, inventive improvisation and a beautiful polystylistic vocabulary) together with the technique of a classical pianist. His sound is almost aristocratic; he often heedlessly neglects the speed limits of ‘safe playing’; his sound is infected with a hint of Romaticism. All of the above constitute his individual style, but never preclude him from convincing juries at jazz competitions of his dexterity. In 2007 and then again in 2011 he was awarded third and second prizes respectively at the international competition Jazz Improvisation; in 2008 the Rūta Švipaitė Quartet which he was a member of was awarded a Grand Prix at the Vilnius Jazz Young Power, while Smolskas received a separate prize as the best instrumentalist. In 2014 his collection of accollades was complemented with the second prize at the Rostov-on-Don competition in Russia.

It is somewhat surprising that the musician of such fine technique and a rich piano touch is simultaneously one of the most active explorers of the digital keyboards. He views this family of instruments as having equal potential for improvisation and a virtuosic performance as the concert piano. He made his first steps towards this new palette of sounds while working with the nationally famous band Pieno Lazeriai. Later he got involved with the Jing'a'Ling, Soul Moustache and Makchu Pikchu. The latter resulted in a trophy in the category of the debut of the year at the M.A.M.A. (Music Association’s Awards Of The Year).

As a member of various ensembles Vytis Smolskas appeard at the Vilnius Jazz, Vilnius Mama Jazz, Birstonas and Kaunas jazz festivals, travelled to Germany, the Netherlands, the UK, Iceland, Latvia, Estionia, Russia, Ukraine, Belarus and Kazakhstan. Furthermore, Smolskas played at one of the largest jazz festivals in the world, the North Sea Jazz. There he performed with the joint bigband and played the repertoire of the New York saxophone player Rudresh Mahanthappa in the presence of the composer himself.

There is no doubt that this young, tasteful and expressive musician has already left a vivid impression, and yet keeps being a mystery piquing the curiosity of his audiences. So far he has played only one full-length concert, but its unusual structure and refined eclecticism suggest that Smolskas is an artist unhampered by prejudice or clichés and enjoys the luxury of freedom. At this point we can expect about anything from him.