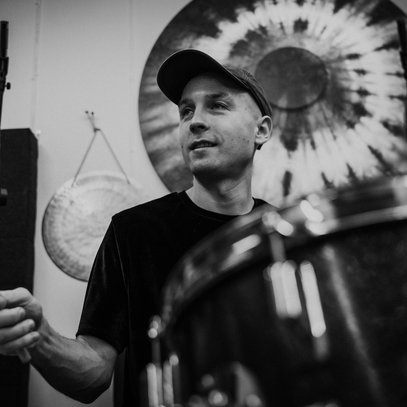 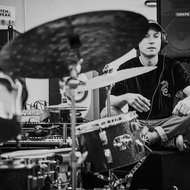 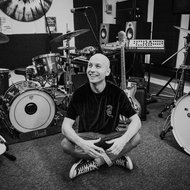 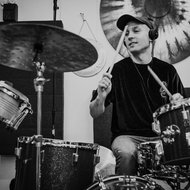 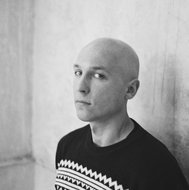 Marijus Aleksa is a genuine shaman of rhythm who has pursued a remarkable international career. After making his debut at the Vilnius Jazz Festival at the tender age of thirteen, he has grown into a stage partner of some of the world’s most celebrated stars and has played at the Montreal Jazz Festival and the Blue Note at Sea jazz forum to mention just a few. An ambitious drummer and percussionist, he relies on his technical prowess and visionary endeavours. His music is not unlike the works by the abstract expressionist painters: rich in colour, vivid, intuitive and hypnotising. His musical maps have been marked with the lines and crossings of jazz, rock, world and electronic club music. Instead of joining the trend of avant-garde dominating the Lithuanian jazz stage, he has chosen the distinctive path of looking for new methods of interaction with drums and percussion in addition to his particular interest in the musical genres seemingly unrelated to jazz and improvisation, thus weaving – strand by strand – his own exquisitely decorated musical tapestry.

Marijus Aleksa (b. 1985) has been surrounded with music since his childhood. His mother Vilmantė Aleksienė was a piano teacher at the Balys Dvarionas Music School in Vilnius; his father Gintaras Aleksa is a physicist and a former bass guitarist at Veidrodis (The Mirror), one of Lithuania’s leading rock groups of the 1990s; his elder brother Domas has followed the father’s footsteps to become a bass guitarist whose name is well known both in Lithuania and beyond.

In 1992, Marijus entered the Balys Dvarionas Music School where he soon revealed his remarkable talent. At the age of just twelve, he created his first band together with his brother. One year on, he appeared on the stage of the Vilnius Jazz Festival as a member of a quartet led by Oleg Molokojedov. Up to this day, he remains the youngest performer to have ever played at the Vilnius Jazz Festival.

Between 2002 and 2005 he studied at the Juozas Tallat-Kelpša Conservatory in Vilnius, between 2005 and 2008 – at the Lithuanian Academy of Music and Theatre, and took a chance to travel to the Berlin Jazz Institute for one semester to study with John Hollenbeck.

His career as a drummer has been exceptionally successful. He won prizes at the Tamsta Drum Day, the Baltic Drummer League, the Sony Jazz Stage and other international competitions dedicated to drums and percussion. In addition to that, he has enjoyed the luxury of sharing the stage with some of Lithuania’s best jazz performers, such as Vladimir Tarasov, Liudas Mockūnas, Dmitrij Golovanov, Jan Maksimovič, Kęstutis Vaiginis and many more, something that made him one of the most outstanding drummers of his generation. Despite that, the ambitious young man nurtured further ideas which in 2009 took him to London.

While there, he was a member of the band called Cortes, took part in dozens of gigs, toured more than forty countries and performed at some of the world’s most prestigious music events, including the Montreal Jazz Festival, the Fuji Rock Festival, and the Blue Note at Sea. He has shared the stage with Keyon Harold, China Moses, Dennis Rollins, Femi Temowo, Joe Armon Jones, Ashley Henry, Bill Laurance, Anthony Joseph, Gilles Peterson’s All Star Band, Native Dancer and other jazz greats.

The year 2018 saw the release of his long-nurtured first solo album, Maps, some of its music subsequently aired by BBC Radio One. The album offers a peculiar mixture of electronic dance music, afrobeat, hip hop and nu-jazz, all merging into a primeval drumming energy.

After a decade in London, Marijus returned to Lithuania. Most recently he has been busy with his solo music, joint projects with other musicians, and the analysis of the technical capability of drum sensors opening up the paths to new soundscapes. In addition to that, he has decided to extend his family’s bass guitar tradition by having started to learn playing the instrument.

For Marijus, his music aligns nicely with teaching, something he took up back in 2008 when for one year he worked as a drum teacher for the Beckton Community Centre in London. He has led master classes in Lithuania, Latvia, Estonia, the Netherlands and the United Kingdom. The year 2019 saw the opening of his private Rhythm School in Vilnius, the institution open to drum enthusiasts of all ages.

According to Marijus Aleksa, he has had a number of what he terms “official” teachers over the years. For him, however, the most important lessons were taught by his stage partners during the many performances around the world. It was his fellow musicians’ talent, resolve and constant urge for improvement that made him want to grow ever better. He would gladly name his brother Domas among his best teachers alongside many others, such as the drummer Darius Rudis, the pianist Dmitrij Golovanov, the saxophonists Kęstutis Vaiginis and Jan Maksimovič. The list should inevitably include his teachers and colleagues in the United Kingdom, namely Femi Temowo, Nathaniel Facey, Rick Leon James, and Dennis Rollins. On the other hand, Marijus considers himself a self-made drummer, at least to some extent, since the Lithuanian drumming school remains in its infancy.

As a guest musician

"Future in Your Hands"