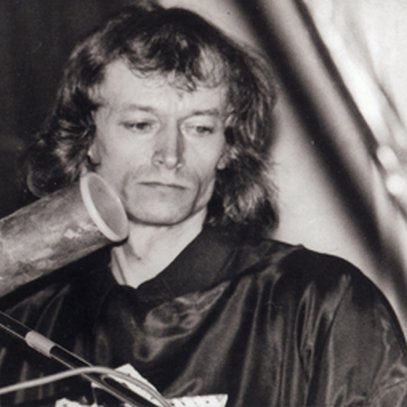 Gediminas Dapkevičius' esoteric electroacoustic music is informed by New Age pan-ethnic spirituality that in a way is reminiscent of musical projects like Vangelis or Enigma. Meditative Eastern chants neighbor with archaic Baltic mythology and bits of jazz harmonies, all tied together by minimalist neoclassical structures that bring in mind a stripped-down, less ambient and minor version of Dead Can Dance. What differs from most of the Western new age projects is Dapkevičius' genuine interest in not only the form, but also the content of the musical traditions that he explores. Dapkevičius’ creative philosophy is one of holism, manifested in the belief that music can open the way to wisdom concealed in mythology and universal cosmic laws. No surprise, then, that the name of his holistic music ensemble is Vartai (The Gates).

Gediminas Dapkevičius was born in 1958 in Šiauliai, a city located in Northern Lithuania. He graduated from the Klaipėda Faculty of Arts of the State Conservatoire, where he studied composition in the class of the famous Lithuanian composer, Prof. Eduardas Balsys.

In 1981 together with Gintaras Kizevičius he formed Solaris - one of the first experimental electronic music groups in Lithuania. At that time, he wrote also music for theatre and non-commercial cinema.

The search for new horizons in music encouraged him to explore the territories of jazz. In 1986-1988 he performed together with Lithuanian jazz artists Neda Malunavičiūtė, Vytautas Pilibavičius and Aurelijus Ščiuka. In 1995 as a member of the band Saulė ir Žuvys he took part at the international jazz festival "Vilnius Jazz 95".

The practices of spiritual quests and meditation, Dapkevičius’ another interest, expanded his perception of music. The new meditative music projects Butterfly Angel and Shepherd of Clouds were released in 1996 and 2000.

In 2006, Dapkevičius completed his Serpent, a “symphony of visions” for soprano, boys' choir, symphony orchestra and electronic instruments.

Since 1996 Gediminas Dapkevičius has been teaching a course on improvisation and creativity at the Šiauliai University.
Title/Year
holvartai@splius.lt