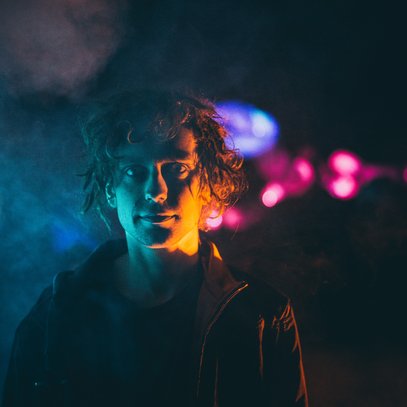 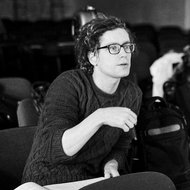 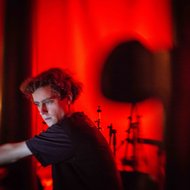 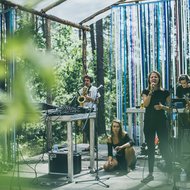 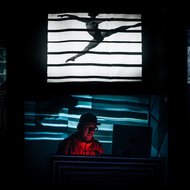 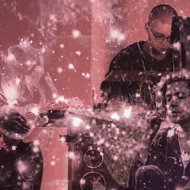 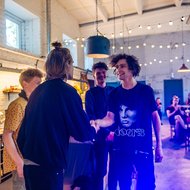 It is hard to assign Andrius Šiurys – creator of electronic, acoustic academic and applied music, author of interdisciplinary works, member of various bands, performer and initiator – to a particular stylistic trend. Contemporary, orchestral, ambient, easy listening, experimental, anti-music – these are just a few genres that could be listed in the attempt to categorise his music. Perhaps there should be a new term – šiurrealist music – for a more accurate definition. Surrealism and Šiurys’ original musical language pervades all his compositions, including instrumental pieces (Poulet à la broche, Cordon bleu, 2018), music for theatre (Kafka Insomnia, 2020), electronic improvisations (Electronic Music Trio), and absurd noise (Galvos Oda) which encourage us to rethink the conventional conception of music. Collective work – which has resulted in interdisciplinary works such as The Filler (2020) and Inertia (2017) – is also important to the composer.

Shimmering Lights for the Blind

X
Shimmering Lights for the Blind

Andrius Šiurys (b. 1991) studied at the Kaunas University of Technology 2009–2013 and gained a bachelor’s degree in music technology. He received his master’s degree in composition from the Lithuanian Academy of Music and Theatre in 2015 in the class of Prof. Rytis Mažulis.

In the work of Andrius Šiurys musicality intertwines with surrealism, expression of the absurd, various images and even with his different alter egos. The word ‘dream’ often recurs in his programmatic titles. There is a pervasive presence of the theme of insomnia-night-mysticism, and a language of metaphors and symbols. In his academic compositions instrumental expression is usually combined with electronic (Miscommunications, 2015; some kind of dream about itself, 2016), and they are permeated by the pop beats, quintessential jazz elements (Flight of the Moon, 2016; Moments of Inertia, 2016) and the phonetic sound of language (Poulet à la broche, Cordon bleu, 2018 makes use of Paulina Simutytė’s invented language that’s reminiscent of French). The word has a special importance in the musical expression of the compositions: epigraphs, poems or excerpts are quite common at the beginning of his scores (Silent Androgyne Monologue, 2014; Shimmering Lights for the Blind, 2015; From the Fourth Dimension, 2020). Extended techniques (près de la table, sul ponticello, sul tasto), kaleidoscopic transition between different techniques, microtones, their glissandi and chromatic tone clusters are all widely used in his compositions. Drawings by Paulina Simutytė acting like prompts for the performers are scattered throughout the aleatoric fragments and improvisational sections of the scores (Prayers from the Noah’s Ark, 2019; Poulet à la broche, Cordon bleu, From the Fourth Dimension).

The combination of the visual and the verbal in Šiurys’s academic work reflect his interdisciplinary pieces, including installations, sound collages, and music for projections and exhibitions. One recent project is particularly unusual – the sound experience The Filler (2020) in the Vilna Ghetto. It is composed of four equal components: the memories told by four Jewish Holocaust survivors, soundscapes, physical listeners’ journeys in the streets of Vilnius, and the city architecture which illustrates the stories. This work is the fruit of collective creativity, its co-authors are director Mantas Jančiauskas, playwright Rimantas Ribačiauskas, composers Andrius Šiurys and Jūra Elena Šedytė.

Šiurys has composed music for the theatre since 2016 and for the cinema since 2017. Sound becomes another intermediary between actors, scenographers, light artists and cameramen, and, together with other artistic means, participates in the story, transcends historical and linguistic barriers, and has a strong emotional impact (music for the online theatre play #PROTEST, 2020; contemporary dance performance Rosetta’s Stone, 2017; silent short film The Nose, 2017). Among Šiurys’ compositions for the theatre are those where the music breaks into the foreground, becoming dominant, changing the director’s idea and even tilting the course of action (e.g. the play Kafka Insomnia, 2020). The composer has worked with the directors Paulius Markevičius, Žilvinas Vingelis, Giedrė Kriaučionytė-Vosylienė, Mantas Jančiauskas, Adomas Juška and others. The performances have been staged at the Lithuanian National Drama Theatre, National Kaunas Drama Theatre, Oskaras Koršunovas Theatre, Meno Fortas, Arts Printing House, and the Juozas Miltinis Drama Theatre in Panevėžys.

Šiurys also performs in a number of bands: he performs electronic music improvisations in the Electronic Music Trio (together with Jonas Jurkūnas and Martynas Bialobžeskis), the cosmic, slow, melodic music of Delasferos (Inga Šepetkaitė and Paulina Simutytė – vocals, Justinas Žilys – guitar, Danielius Pancerovas – saxophone). The duet with Paulina Simutytė, lazy diamond’s underground, has the features of ambient, psychedelic music: long streams of sound, gentle melodies, intoxicating electronic effects, allusions to hallucination. Absurd noise and disregard for music norms – the most terrifying mask he could ever wear according to the artist – unfolds in a band called Galvos Oda in which Šiurys performs together with his brother Paulius.

The composer has been awarded various prizes for his work including first prize for the composition Flight of the Moon for tenor and mixed ensemble at the young composer’s competition Musica Vera in 2016; Young Composer’s Prize awarded by the Lithuanian Composers’ Union in the Best Music Composition of the Year in 2019; and nomination in The Experience of the Year category at the Golden Cross of the Stage awards for the collective work The Filler (music composed together with Jūra Elena Šedytė).