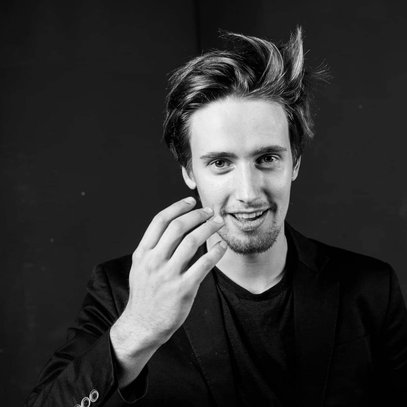 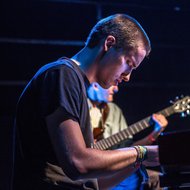 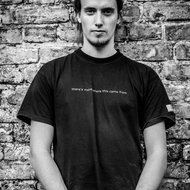 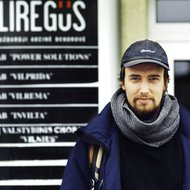 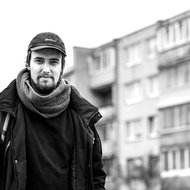 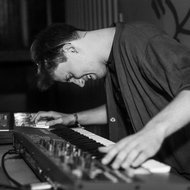 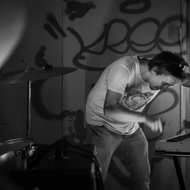 Mantvydas Leonas Pranulis is one of the most widely-accomplished and versatile creators of his generation. He is a trumpet player, pianist and composer, who has also been demonstrating his vocal abilities more and more frequently. His musical language is characterised by a wide range of dynamics, tempos and timbres. Jazz, classical music, minimalism, elements of electronic and rock music interlace in Pranulis’ world. For this open-minded musician, working in one strictly defined style would mean a creative impoverishment, rather than a step forward. Pranulis’ musical portrait may at times seem quite eclectic, but all his works are connected by a deep introspection and sensitivity to the environment around us. Pranulis is also active in the film and theatre industries, creating music for films, theatre productions and other performances. Watching Pranulis on stage is a real pleasure. Whether he is playing on a big stage or just in a tiny room, he is always absorbed in the sound and devoted to what he does. There is no room for falseness in his work.

The musical direction that the life of Mantvydas Leonas Pranulis has taken seems to have been written in the stars. Born to a family with deep musical traditions in 1996, he took his first steps in formal musical education in trumpet classes at the Vilnius Karoliniškės Music School. In 2011, Pranulis continued his career at the Vilnius Conservatory of Juozas Tallat-Kelpša, where he specialised in jazz trumpet and keyboard instruments. Consistently improving his skills and knowledge, he entered the jazz study program at the Lithuanian Academy of Music and Theatre in 2014. However, the program did not meet his needs, so, in 2018, Pranulis decided to swap jazz for composition studies. The composer’s sound profile subsequently expanded considerably, largely under the influence of one of his teachers – Jonas Jurkūnas, a contemporary music composer with a strong interdisciplinary approach.

Pranulis first received professional recognition while still in music school. He won the festival-competition Classics and Jazz for Lithuanian music and art school ensembles in 2010, and the Juozas Pakalnis Young Performers Competition in 2011. In 2015, he won the Grand Prix of the tenth Vilnius Jazz Young Power competition with Brave Noises, an ensemble he formed, as well as the Best Instrumentalist Award. Then, in 2017, with another band called Allergy +, he won the Jazz Talents competition at the Klaipėda Jazz Festival. In 2021, with his trio Luvhurts, he won the sixteenth Vilnius Jazz Young Power competition again, and was awarded as the author of the best original composition as well.

The Brave Noises collective mentioned above has a special place in Pranulis’ life. The band, which has been active since 2013, has released two albums that have been praised by music fans and critics – Between the Dreams and Live EP – and has performed in Germany, the United Kingdom, Poland and Latvia. Brave Noises is one of Pranulis’ main creative platforms, where, with the help of his talented friends, he glides freely through different genres creating his own kind of fusion jazz.

For many years, Pranulis kept reiterating his ambition to record a solo album. This was not just empty talk. In 2020, he released his solo album Liar Who Fell in Love With Truth, which required a lot of time and effort. Pranulis worked with some of the most promising musicians of Lithuanian alternative scene including Monikaze, Andrius Šiurys, El Chico Fuendre and Augustė-Ona. Paradoxically, Liar Who Fell in Love With Truth probably has fewer jazz elements than any of his other projects. Instead, this debut album is filled with angular IDM / glitch rhythms, rough techno echoes, and even noise vibrations. Pranulis’ solo album perfectly illustrates his indescribably broad musical horizons and his tendency to explore philosophical and social questions.

The close relationship between Pranulis’ curriculum vitae and the theatre is also a product of his family history. His father, the late Valdas Pranulis, was a director and actor who ran the Vilnius Old Town Theatre. Naturally, the theatre scene has accompanied the young Pranulis from an early age. The ongoing collaboration between Pranulis and Stalo Teatras (Table Theatre) started in 2016, but he has also worked with other theatres and directors. His music can be heard in Sonny’s Blues directed by Žilvinas Vingelis, Two Koreas by Kamilė Gudmonaitė, Valhalla by Andrius Bialobžeskis, Marius Repšys On Stage by Mantas Jančiauskas and other performances.

As a composer, Pranulis also works outside the theatre. In 2016, he presented the composition of sacred character Finem, which he performed together with the women’s vocal ensemble Melos. His special attention to religious themes and a penchant for choral compositions emerged again in 2019 while preparing a composition called Path for the competition Vox Juventutis together with the choir Jauna Muzika. Each of the instruments in this composition symbolised different cultural and religious traditions: Christian, Islamic, Buddhist and Pagan. Pranulis admits that one of his favorite composers is Arvo Pärt. The influence of Pärt’s sacred minimalism is evident in his work.

For Pranulis, music is not just a reflection of his own feelings through sound. For him, it is a mode of communicating with different social groups. He is constantly at the forefront of initiatives aimed at involving people with disabilities, such as the performance-art work Mirror or the social project Bioforms. He also devotes a lot of time to pedagogical activities. Various creative camps and masterclasses eventually coalesced into a private music school, Muzikalkė, which Pranulis founded together with his sister, composer Juta Pranulytė.

Mantvydas Pranulis is a creator of exceptional energy and zeal. Different art forms intertwine on his path, but they are united by common denominators – personal introspection and strong core values. Pranulis is diving deeper and deeper into composition, so his piece People, Friday Night and Sad Morning presented at PULSAR, festival for contemporary music in Copenhagen, in 2020 is surely just a prelude to broader recognition.