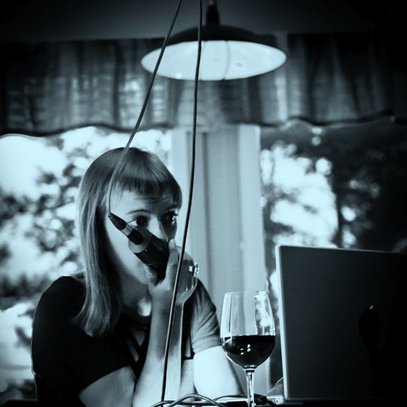 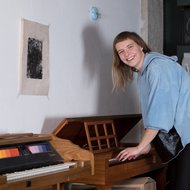 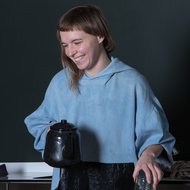 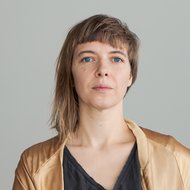 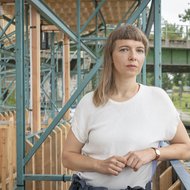 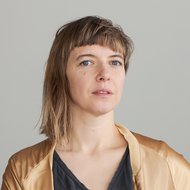 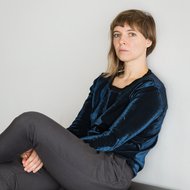 Lina Lapelytė is an artist, musician, creator of performance art and contemporary opera. Initially trained as a classical violinist, Lina Lapelytė has developed an ongoing interest and research into experimental music, amateur performance, and historical genres. In her recent work, Lapelytė traverses between disciplines and explores various forms of performativity. Her works engage trained and untrained performers often in an act of ‘singing’ through a wide range of genres such as mainstream music and opera, while examining issues of displacement, otherness, ageing and gender. The singing takes the form of a collective and affective event that questions vulnerability and silencing. In 2013 her creative collaboration with Rugilė Barzdžiukaitė and Vaiva Grainytė led to the creation of the contemporary opera Have a Good Day! which is a story of the ten cashiers and their invisible lives. The opera was shown in dozens of international festivals around the world, and received six international awards. The climate change opera-performance Sun & Sea (2017) was the second project the trio co-created, which received the Golden Lion Award of the Venice Art Biennale 2019.

“Have a Good Day!” choir

Lina Lapelytė (1984) – artist, musician, composer and performer. Lives and works in Vilnius and London. Besides stage performances in the context of improvised music, one of her main artistic interests lies in the genre of contemporary opera and performance art. This highly interdisciplinary approach is supported also by attained education: in 2007 she graduated from the Lithuanian Academy of Music and Theatre (Bachelor of Arts in Violin Performance), in 2009 – the University of the Arts in London (Bachelor of Arts with First-Class Honours in Sound Art), in 2013 – the Royal College of Art in London (Master of Arts in Sculpture). Since 2013 Lapelytė has been a visiting lecturer at the institutions such as The Ruskin School of Art in Oxford, University of the Arts London, Royal College of Arts (London), Oslo National Academy of the Arts, and Vilnius Academy of Arts.

Lina Lapelytė explores contemporary forms of performativity that are related to a genre of new opera and performance in a context of contemporary art. According to the artist, in her works such as Have a Good Day!, Candy Shop, Hunky Bluff she has been exploring the phenomena of song, using it as an object with which to examine issues of displacement, otherness and beauty. Re-enactment supports her investigation into aesthetics, control and reality. Performances and operas are fueled by expression, marked by pastiche and grotesque, contextual and conceptual musicality, theatrical suggestibility, expressive stylized visuality. Performances and operas unfold sensitivity to feminine identity and it’s complex relation to contemporary reality in a manner of tradition of postfeminist art. Her recent performance-based practice flirts with pop culture, explores gender stereotypes, ageing and nostalgia.

For her performance Hunky Bluff (2014), Lapelytė investigated the 18th century Catholic tradition of castrating boys to prevent their voices breaking at puberty. By translating the original expressive melodies, known as arias, and rearranging the compositions originally written for male castrati to instead be performed by a chorus of thirteen low pitched female voices, Lapelytė reversed the dynamic of the compositions. In the series of performances Candy Shop (2013/2015) rap songs become lullabies and Status Quo numbers fade into feats of feminist sonic endurance, gestures from well-known West Coast hip hop lyrics mutate into a piece of chamber music and dance class – restaged semiotic overturns of gender hierarchies.

By ‘unlearning’ their classical formation, and internalising the resonating dynamics between visual and sound art, Lapelytė unsettles the passive/active foundation of listening.

In 2013 her creative collaboration with Rugilė Barzdžiukaitė and Vaiva Grainytė led to the creation of the contemporary opera Have a Good Day! which is a story of the ten cashiers and their invisible lives. The opera was shown in dozens of international festivals around the world, broadcasted on BBC Radio 3 (UK) and LRT (Lithuania), and received six international awards, including the main Lithuanian theater prize Golden Stage Cross in the category The Best Staging of the Work by Lithuanian author in 2014. In 2013 during the Swedish Biennial for Performing Arts the opera was selected by an International Theatre Institute (ITI) jury (ITI received over 400 applications from more than 35 countries) for presentation at final Music Theatre NOW competition where the work was awarded Globe Teana-Theatre Observation prize. The opera-performance Sun & Sea (2017) was the second project the trio co-created, and it has been chosen to represent Lithuania at the 58th Venice Art Biennale. This climate change opera-performance received the Golden Lion Award of the Venice Art Biennale 2019.