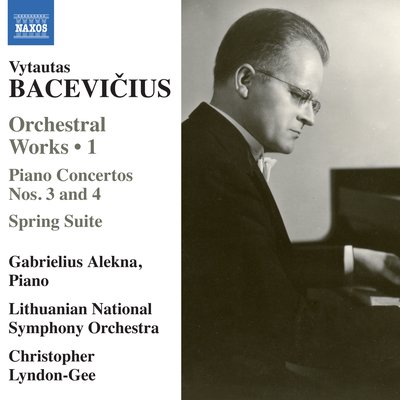 On Saturday, April 18th at 5:30 pm in the ground floor lounge of the Lithuanian National Philharmonic Hall, the pianist Gabrielius Alekna together with the Australian-Italian conductor Christopher Lyndon-Gee will give a pre-concert talk presenting a joint international and inter-institutional project, an album of works by Vytautas Bacevičius recently released by the classical music label Naxos Records. The author of the idea Alekna and his ‘accomplice’ Lyndon-Gee will introduce the recording and review the modernist and conceptual music language of Bacevičius who is regarded as a ‘Prometheus’ amongst the Lithuanian émigré composers. The talk will be followed by a concert featuring Bacevičius’ very own Fourth Piano Concerto (present on the CD) performed by Alekna himself together with the Lithuanian National Symphony Orchestra and conducted by Lyndon-Gee, all of whom can be heard on the aforesaid recording.

The idea for this international recording venture was not at all accidental. Gabrielius Alekna is not only an active performer (equally awaited in New York as he is in Birštonas) with an extensive concert repertory ranging from classicism to minimalism, but is also an expert on Bacevičius’ music. His recording of complete Mots by the Lithuanian composer Vytautas Bacevičius was released in 2012 on the British label Toccata Classics, and involved collaborations with the two-time Grammy winning producer Judith Sherman and the four-time Grammy-nominated pianist Ursula Oppens. His dissertation on the unpublished piano works by Bacevičius received a Richard F. French Doctoral Prize as the best Juilliard School dissertation of the year. In addition, he also prepared a critical edition of hitherto unpublished piano works by Bacevičius, which was published in two volumes by Lithuanian Music Information and Publishing Centre.

Australian-Italian composer, conductor, and five-time Grammy Nominee and Onassis Prize winner, Christopher Lyndon-Gee, soon joined the project. He was recently named one of the world’s best conductors in Naxos’s 600-page book and CD compilation A to Z of Conductors, covering the entire history of conducting from Hans von Bülow and Arthur Nikisch to the present day. Lyndon-Gee wrote the essay for the brochure of the album where he situates Bacevičius’ ‘cosmic music’ on an ideological axis alongside Scriabin, Bartók, Jolivet, Varèse and mature Stockhausen. Recording Producer Vilius Keras, assisted by Aleksandra Suchova, made a major contribution to the success of the project, with his scrupulous ear and brilliant technical solutions. 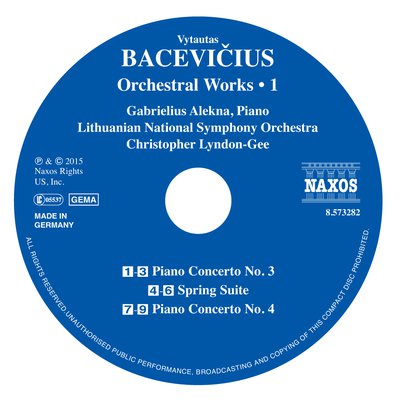 Next to Čiurlionis, Bacevičius is one of the most significant historic figures in the context of Lithuanian music culture. Nevertheless, infrequent performances and a near absence of the recordings of his works speak to a rather obscure cultural status his name enjoys locally and even less so internationally. His unhappy exile of thirty years in the United States, caused by the outbreak of the Second World War while he was on a concert tour as a pianist, and exacerbated by the subsequent Soviet take-over of the country, is probably the single biggest reason for his neglect. The current project, thus, aims to carry on and spread Bacevičius’ creative legacy, as well as fix a permanent place for him within the national and international concert repertoire. When Naxos Records, the Hong Kong-based label with offices in 15 countries worldwide joined the project, the success of such a goal was secured.

Next to the aforementioned Piano Concerto No. 4 (Symphonie Concertante, 1962), the album titled ‘Vytautas Bacevičius. Orchestral Works, volume 1’ — Naxos fully intends there to be further instalments in this series — also features two compositions that have never been recorded before, Piano Concerto No. 3 (1946/1949) and Spring Suite (1958) for symphony orchestra. According to the conductor, the album aptly captures different periods in Bacevičius’ creative biography, starting with the ‘French lyricism’ heard in his Concerto No. 3 and finishing with a so-called ‘cosmic music’ in Concerto No. 4, entering into the mind of a listener in form of wordless, bodiless, and edgeless visions and impressions.

The album was produced in close collaboration with the Lithuanian Music Information and Publishing Centre, with the support of the Lithuanian Council for Culture, Lithuanian National Philharmonic Society, Permanent Mission of the Republic of Lithuania to the United Nations Office and other international organizations in Geneva, Lithuanian National Radio and Television, Saulius Karosas Charity and Support Foundation, as well as individual donors Renata Beržanskienė and Kęstutis Švirinas.