The Music Information Centre Lithuania has just released a new album, Choir Vilnius. Circle Ending, featuring three experimental compositions for choir and electronics by Andrius Arutiunian, Mantvydas Leonas Pranulis, and Monikaze. The initiative was initially launched back in 2018 by the Vilnius Choir during the Vilnius LAB project to offer young composers a rare chance to write new music in close collaboration with the choir.

According to musicologist Paulina Sofija Nalivaikaitė, the Vilnius Lab focused on sonic experiments, the involvement of other areas of artistic activity, the innovative forms of expression and the use of multimedia and spatial solutions. The three aforementioned composers came the winners of the competition.

Later they took part in a workshop together with the Vilnius Choir, led by Artūras Dambrauskas, and the Latvian composer Mārtiņš Viļums who worked as a mentor. In cooperation with the Music Information Centre Lithuania, the three pieces written during and after the workshop were eventually recorded in 2021 at the studio of the Vilnius Choir.

“For us, the experience proved rather unique as we had an opportunity to rehearse with the choir during the entire process, which gave us a chance to live-test the electronics, the effects and the various ideas before completing our scores,” Monikaze said reflecting on the project. “This method enables the experiments of a completely different level, because through the direct contact with the performers we were able to explain our ideas in detail – in words or by singing rather than through instructions in the score. On the other hand, I was happy to listen to their ideas as this gave me a chance to see the whole thing through the eyes of the performer, which is a little like perceiving the music from a different perspective.” 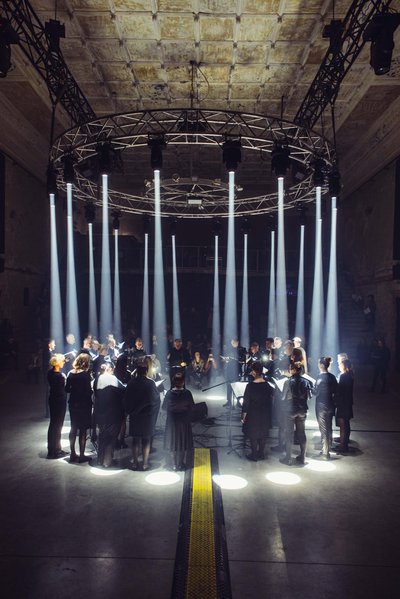 “I wrote We, the Chorus pondering the forms of human gatherings where voices, sounds and frequencies merge,” Andrius Arutiunian said commenting on his piece. “For me, the Auto-tune technology became the key method of composition as it leads to a perfect algorithm through the adjustment of choral voices. Moreover, each and every micro-intonation turns into a yet another centre of musical allure.”

“I am happy to have had the opportunity to experiment with the fine professional choir,” Mantvydas Leonas Pranulis said. “I feel grateful to the choir, its artistic director, and the mentor who were so helpful in elaborating and finetuning my composition.”

In addition to introducing the three experiments by the three young composers, the album, designed by Liudas Parulskis, might be seen as a milestone in their artistic biographies.

According to Linas Paulauskis, the producer of the album, Not Allowed is the first larger piece of academic music by Pranulis, mostly known as a jazz performer. For Arutiunian, his We, the Chorus is the first choral composition and a symbolic gesture of self-introduction to the genre. Monika Zenkevičiūtė, also known by her stage name Monikaze, used her real name for her academic compositions and the nickname for her refined club electronics. Her piece Circle Ending has merged, for the first time in her career, the two genres with the composer following the track ever since.

Choir Vilnius. Circle Ending, complete with the Lithuanian-English booklet and the QR code for those listening online, is available on MusicLithuania.com and Bandcamp. The release was sponsored by the Lithuanian Council for Culture and the Ministry of Culture of the Republic of Lithuania.