Since 2002, the Zoom In promotional CD series have been presenting the latest compositional music from Lithuania. The current 12th edition – which also happens to be the one hundredth release by the Music Information Center Lithuania – features works by leading Lithuanian composers, as well as younger yet stylistically self-determined artists, who have already received acclaim from the international music community. The album is charged with intellectual intensity; it presents a meticulous ‘acupuncture’ of sound, embracing the clarity of the New Simplicity, the post-minimalist aesthetic, and the science of spectralism, and highlighting the individual practices within a diverse Lithuanian music landscape. 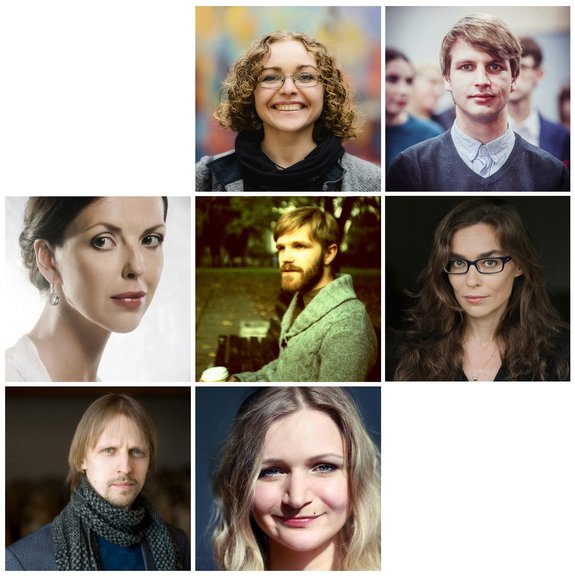 Composers from Zoon In 12 (from top left): Egidija Medekšaitė, Dominykas Digimas, Justė Janulytė, Julius Aglinskas, Žibuoklė Martinaitytė, Marius Baranauskas, Justina Repečkaitė
According to British composer and the author of the album’s liner notes Ben Lunn, “The world is filled with multiple styles, influences and goals in contemporary music. Lithuania stands in a particularly curious position, searching for its personal voice and vision, as well as coming to terms with its varied history. This has produced a truly distinctive contemporary music scene, offering nuanced ideas to explore across Europe (or the globe), inventing absolutely unique individual voices, or producing a fascinating journey in the exploration of ‘their’ voice. This release will hopefully reach many enthusiastic ears.”

The current compilation features seven live recordings from concerts and festivals, made between 2015 and 2017. The composers represents the younger generations born in the 1970s, 1980s, and one of them after 1990. In her review of this album, composer Raimonda Žiūkaitė identifies melancholy, minimalism, and meditative mood as common denominators of their works (perhaps with one exception). Probably it can be said that the album is a reflection of that debatable Lithuanian sound identity, relying not so much on a refined technical complexity, as on “undomesticated spirit“ and contemplations on nature.

The album features the following compositions: “Harp is a Chord” by Justė Janulytė, recipient of the Lithuanian National Prize for Culture and Arts; multiple award-winning work “no sense” by Dominykas Digimas; applauded by the British new music platform Sound and Music “Megh Malhar” by Egidija Medekšaitė; “Tapisserie” by Justina Repečkaitė, presented at the annual ISCM World Music Days Festival in China; “Delta Cephei” by Marius Baranauskas, represented at the International Rostrum of Composers; the highlight of the 2017 Gaida Festival “Chiaroscuro Trilogy” by Žibuoklė Martinaitytė; and Julius Aglinskas’ string quartet “...”, which sparked the interest of the leading British exponent of avant-garde and experimental music, ensemble Apartment House.

If you are a music professional and would like to receive a copy of Zoom In 12, contact us at info@mic.lt