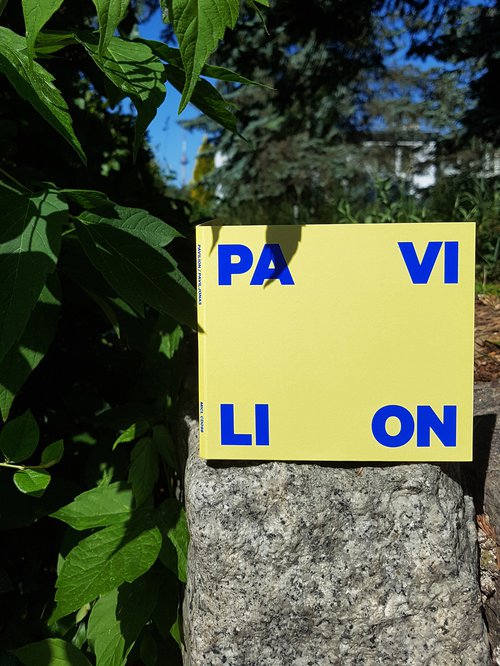 The featured artists (Arturas Bumšteinas, Darius Čiuta, Viktorija Damerell, Gailė Griciūtė, Kristina Inčiūraitė, Ramūnas Motiekaitis, Emilija Škarnulytė, and Julijonas Urbonas) work across disciplines, but in all instances often explore the possibilities and boundaries of sound. Some works featured on the album were created by artists working predominantly with the visual media – sculpture, installation art, video art, photography, performance art, design, and the like. Their treatment of sound is inventive, unconventional, and bold; it is liberated from the constraints of the academically trained composers, and is being organically integrated into various unexpected forms, and contexts.

Pavilion induces alternative aesthetic experiences to those of a typical music record – it absorbs the audience into a vast sound terrain, stimulates audio-visual imagination, and pushes the boundaries of what constitutes music in its traditional sense even further. The place, the company, and the timing are as important as the act of listening itself, becoming fundamental components of the listening experience as a whole. The tracks on the album work in different ways, but all call for an attentive and careful listening act, which enables to recognise and identify conceptual sound meanings, acoustic metaphors, and narratives.

“The title Pavilion refers to the architectural characteristics and structures of sound. A pavilion is both an open, and an enclosed space, with sparse walls and hollows, where sound can dissipate and turn into a fleeting acoustic footprint”, says the album curator Arturas Bumšteinas, whose areas of creative production include conceptual composition, experimental and electro-acoustic music, sound art, radio theatre, curatorship, and stage performances. “At the same time this architectural structure is unfenced to the outside field and its sound realities.”

The release of Pavilion was supported by the Lithuanian Council for Culture.

The CD is available for purchase at our eShop. The online shop accepts all major credit cards, including: Visa, MasterCard, Maestro, American Express, and payments by PayPal. More details can be found here.