Graphic design: Jokūbas Jacovskis
“Delayed-Action-Balakauskas” – this could be the subtitle of the retrospective album of works by Osvaldas Balakauskas. Released by the Music Information Centre Lithuania, with cover design by Jokūbas Jacovskis, the CD titled Erasmus presents five hitherto under-noticed works composed in the last two decades of the 20th century, all characteristic of Balakauskas’ versatile composing styles, ranging from jazz to post-minimalism, and featuring electro-acoustic elements, as well as his distinctive ‘Balakauskas’ tonality’.

Osvaldas Balakauskas was one of the most prominent Lithuanian modernist composers, whose musical authority and influence have shaped generations of composers since the 1970s. Balakauskas was known for his unorthodox, independent and anti-dogmatic aesthetic attitude, as well as his ‘Erasmian’ social character traits, and leadership qualities. His music, which was flagged as ‘bizarre’ and ‘abrasive’ for featuring elements such as prepared piano, amplified and distorted cello or reversed tapes, offered a breath of fresh air, foreshadowing a future of new and independent creative possibilities. 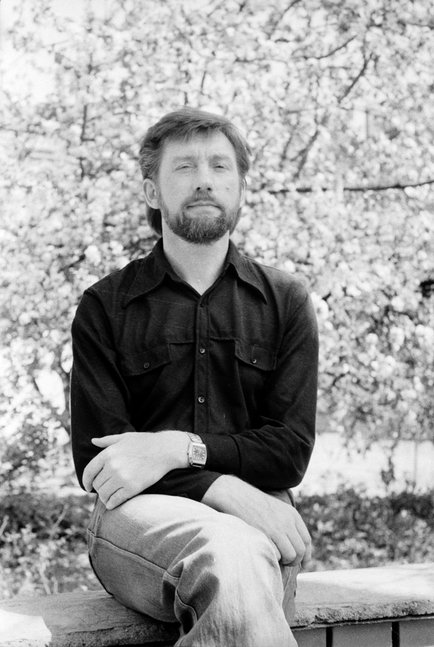 Composer Osvaldas Balakauskas, in 1979. Photo: Arnoldas Barysas, Office of the Chief Archivist of Lithuania
Composed twenty years ago, and first performed by the iconic jazz, classical and avant-garde trumpeter Markus Stockhausen,“Erasmus” is an axle-piece on the album. The piece is akin to the Third Stream movement, synthesizing jazz and classical music. The present recording features Laurynas Lapė (trumpet) and Jievaras Jasinskis (trombone), who showcase their dexterity and fluency in both jazz and classical performance. The electronic part which was lost over time now was recreated by composer and musicologist Linas Paulauskis.

The album also features the historic recording of Balakausas’ most minimalist and one of his most scandalous works “Do nata”, with Donatas Katkus performing the viola parts. As odd as it may sound today, the composer’s ‘bold’ use of minimalism and inclusion of tape recordings in concert was met with acute aversion and hostility by his contemporary audience, when first presented 35 years ago.

“Auletics-2” for flutes, percussion and live electronics is among the most ‘overdue’ pieces on the album. Commissioned 34 years ago by a wellness centre for use in light and aromatherapy sessions, the piece was instantly discarded for being too emotionally intense, and thus remained unknown to the audience until this day. The current recording replaced the synthesizer parts with those acoustic instruments then imitated on it, and features Marius Pupkovas playing five different flutes.

Financed by the Lithuanian Council for Culture and Association LATGA, Erasmus combines ‘electrified’ sound, shifting textures, as well as evocative and inventive instrumentations. It is now available for purchase online and at the Lithuanian Music Information Centre (A. Mickevičiaus st. 29, Vilnius).