The Music Information Centre Lithuania has published Trio No. 1 for trumpet, viola, and harmonium in the quarter-tone system (1933) by Jeronimas Kačinskas as part of the Lithuanian Classics series, consisting of the most important sheet music publications by leading Lithuanian composers of classical and early modern music. The story predating the publication resembles a detective as the score was considered lost many years ago. It would only occasionally emerge as a formal subject of a musicological discourse. The year 2017, however, saw both the publication and the first performance of the piece 110 years after the composer’s birth. 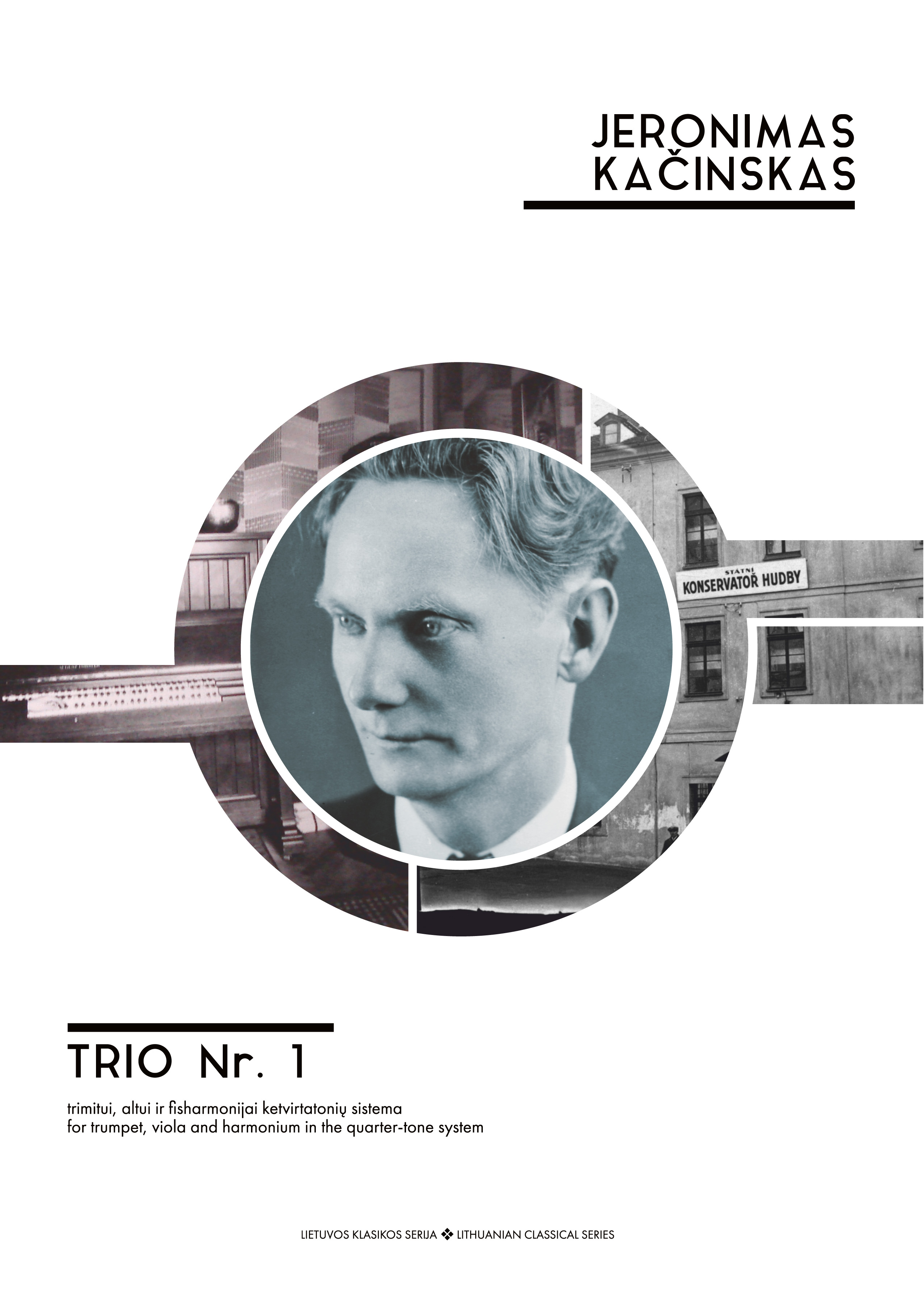 Cover design by Matas Dailyda
Before leaving Lithuania in 1944, Jeronimas Kačinskas had established himself as a modernist composer valued primarily for his microtonal and athematic works. In the United States, where he lived from 1949 until his death in 2005, Kačinskas stuck to considerably more modest musical concepts. After studying quarter-tonal composition with Alois Hába in Prague, he returned to Lithuania and introduced a course in quarter-tonal music at the Klaipėda Music School in 1933. He was an active advocate of microtonal music, particularly in the local press, but the Lithuanian music scene paid little or no attention to his initiatives. An outsider inspired by innovative ideas, Kačinskas wrote his quarter-tonal Trio No. 1 in 1933. Luckily enough, he owned a quarter-tonal harmonium and borrowed a quarter-tonal trumpet from a fellow composer.

2013 should be considered the year of re-emergence of the work thanks to Rūta Stanevičiūtė, a Lithuanian investigative scholar focused on trends of modernism in Lithuanian music. She found a handwritten score of the Trio in perfect condition in Prague after looking through a huge archive of Alois Hába. Rūta Stanevičiūtė brought a copy of the work back to Lithuania. Effectively, this marked the beginning of a new life for the piece which offered musicologists essential new insights into the composer’s early ouvre. As one of the first examples of the Lithuanian avant-garde music, the Trio also helps to better understand the processes in musical modernism in Central and Eastern Europe.

Apart from its musical and historical value, the score of the quarter-tonal Trio may serve as an important source of information for musicologists, thanks particularly to the introductory article by Rūta Stanevičiūtė who explains, in Lithuanian and English, Kačinskas’s microtonal and athematic works as well as some of the base concepts of his teacher, Alois Hába, adhered to.

As far as performers are concerned – that is, those who will dare to take a challenge of reading the complex musical narrative – they will find everything they might need for a live performance, including several practical advices, editor’s notes, and rearranged parts (edited by Linas Paulauskis) as a quarter-tonal harmonium has been replaced with two pianos in this publication.

The publication of the score was part-funded by the Lithuanian Council for Culture and the Ministry of Culture of the Republic of Lithuania.

Sheet music is available for purchase online at our eShop. The online shop accepts all major credit cards, including: Visa, MasterCard, Maestro, American Express and PayPal. More details can be found here.