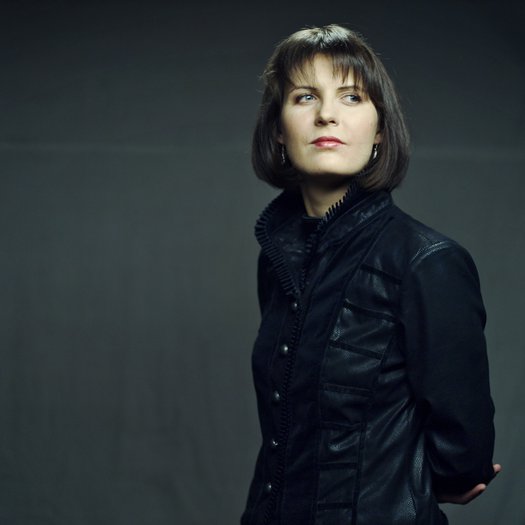 Photo: Narimantas Šerkšnys
It is not a very frequent occurrence in Lithuanian contemporary compositional music that the works of composers making their debut are so mature that they early on enter the living repertoire and begin to appear regularly on the programmes of local and foreign concert halls, and find themselves next to the works of the titans of culture like, for example, Čiurlionis, Tchaikovsky or Beethoven. Nor is this not such a frequent occurrence only in Lithuania or in the context of contemporary culture. The composer Raminta Šerkšnytė’s graduating works for her Bachelor’s and Master’s degrees fit, as it happens, into this ‘not a very frequent occurrence’ category. ‘The most intense things occur in one’s youth,’ believes the author who almost 20 years ago without any hesitation set herself the task of fulfilling her ambitious plans and putting the maximum investment into her efforts.

Raminta Šerkšnytė’s symphony Iceberg (her graduating work for her Master’s) will be performed twice this spring by the Lithuanian National Symphony Orchestra under the baton of Modestas Pitrėnas, while De Profundis for string orchestra, her graduating work for her Bachelor’s, will be presented by the conductor Mirga Gražinytė-Tyla in summer at the Lucerne Festival and at three concert spaces in Detroit. The latter composition is so far the composer’s best-known work, having been heard about a 100 times in concert halls across the world and performed by more than 20 different orchestras.

The Lithuanian National Symphony under Modestas Pitrėnas has just within the last several days (5 March) performed Iceberg (2000), her multi-layered, mystical work, embodying the powers of nature and with underwater currents put into motion by the musicians, and on 25 May they will be presenting it at the Polish National Radio Symphony Orchestra Concert Hall in Katowice, where the urban concert space with a seating capacity of 1800 was built a couple of years ago on the site of a former coal mine.

On 30 March the composer’s Midsummer Song for strings (2009) will be presented at the World Music Days of the International Society for Contemporary Music. This will be the fifth time that her work, after a selection process, will be performed there. According to the composer, the work was conceived as if it were a pantheistic song to dawn breaking, where the sounds are, as it were, unravelled to form ever greater constructs (melodies, recitatives, arias, choral pieces) and after an ecstatic culmination leaving one with a feeling of ‘endless summer’. In 2016 at the World Music Days in South Korea Raminta Šerkšnytė’s composition will be performed by the Hong Kong New Music Ensemble II under the baton of Sharon Choa. This composition was written in response to a request from Gidon Kremer specially for the Kremerata Baltica orchestra. In 2011 the composer Arvo Pärt, strongly affected by this song, nominated it for the Prince Pierre Foundation competition (Monaco), where it was awarded the Young Musicians Favourite Choice prize.

On 14-17 July the conductor Mirga Gražinytė-Tyla, interpreting Raminta Šerkšnytė’s music not for the first time, will present De Profundis (1998) at three concert spaces in Detroit: the synagogue and community centre of Congregation Shaarey Zedek, the Macomb and Seligman performing arts centres, and on 21 August at the Lucerne Festival with the European Chamber Orchestra. ‘This dramatic music, full of contrast, reflects a certain kind of world view of a young person, when life is perceived in a very maximal way, very starkly, and where euphoria is quickly replaced by disappointment. Both in art and life there is a longing for experiences that are out of the ordinary and transcendental, as well as a belief in the deep power of the sacrality of art,’ is the comment made by the composer on her distinctive debut work, a pivotal composition in her career.

Translated from the Lithuanian by Romas Kinka
Information from MICL