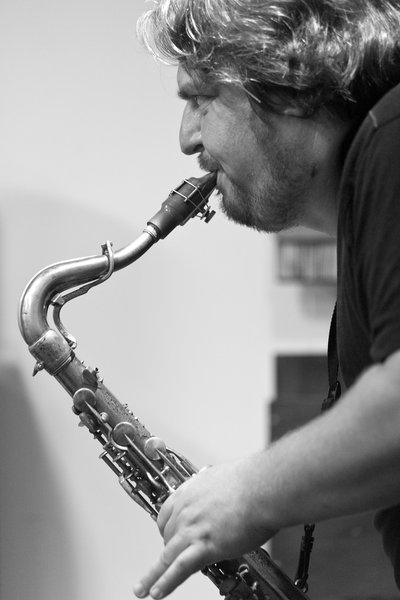 Photo: Martynas Aleksa
Although it is by no means easy to become an authority in the multifaceted and changing world of the new improvised music, the multi-reed player and composer Liudas Mockūnas (b. 1976) has retained the position among the leading figures of Lithuanian modern jazz and free avant-garde music for over a decade. His virtuosity, education and international success make an impression on the young generation; the maturity of his compositions is respected by the advocates of conceptual jazz; his expression and explosive energy connect him with other spontaneous and extemporary improvisers.

Mockūnas has been awarded at Birštonas and Vilnius Jazz Festivals and has received the prize of Lithuanian Musicians’ Union for his contribution to the Lithuanian jazz culture; together with Danish drummer Stefan Pasborg he has founded a band Toxicum and their self-titled debut album was elected the Jazz Discovery of the Year 2004 at the Danish Music Awards, while his live improvisations for the play The Cursed (directed by Artūras Areima, OKT Theatre) have gained him the Golden Cross of the Stage in the Composer’s nomination in 2011.

Presently, Mockūnas is a lecturer at the Lithuanian Academy of Music and Theatre, as well as one of the leaders of the Lithuanian Jazz Federation and one of the founders of the NoBusiness Records label, focused on recording jazz and free improvised music. He is also one of the mostly recorded and exported Lithuanian jazz musicians, with solid international reputation and an incredibly tight tour schedule.  It is no surprise that such involvement in numerous activities expands the list of his creative partners every year, featuring the names of prominent improvised music performers from the Baltic States and Scandinavian countries, along with France, Japan and the United States of America.

“Bandleader Liudas Mockūnas combines a robust free-jazz attack with a highly developed grasp of extended techniques that more often find traction in European free improvisation. His closest comparisons would be fellow Northern Europeans Mats Gustafsson and Martin Küchen, since he weds brawn and grace with similar aplomb, but he also has a tender vibrato neither of them employ.” – Bill Meyer, Downbeat (review of CD Drop It, on which Mockūnas appears with his group NuClear).

The spectrum of colleagues that Mockūnas collaborates with in the capacity of the band leader or guest performer is fairly wide, but there are no accidental acquaintances. Most of his stage partners are his good friends with a lasting history of creative dialogue or at least possessing a potential for future continuation. Such extended partnership has been established between Mockūnas and Estonian guitarist Jaak Sooäär – the member of the Free Tallinn Trio and a president of the Estonian Jazz Federation. The two are related through administrative matters of the federations, as well as the lasting musical friendship, dating back to the studies at the Rhythmic Music Conservatory in Copenhagen. A couple of years ago, the duo took part at the London Jazz Festival, making an appearance at the Vortex club where they presented a programme titled Heavy Beauty. Over the ten days of the festival, hosting thirty concerts at different venues each day, the duo has found itself within a truly spectacular context: the same night, the British improvised music legends - pianist Keith Tippett and his wife, a singer Julie Tippett – made their appearance at the Vortex stage, while on other days the club visitors had a chance to listen to Kit Downes, Ken Vandenmark, Matthew Shipp and other highly respected figures of the progressive jazz scene.

The collaboration between Mockūnas and Sooäär represents a characteristic continuation of his earlier associations: he has formed similar duos with guitarists Juozas Milašius and Marc Ducret (together with the latter he recorded a CD Silent Vociferation, which was released by NoBusiness Records in 2009. The conversations of two equal partners mostly originate from timbral dialogues and spontaneous sonoric inventions – ranging from barely audible overblowings and inarticulate clacking of the strings to a deformed marginal noise, beastly shrieks, forced, self-destructive and agonized sound, until the exuberant musical palette in a way crosses and defies the chamber nature of duet music. 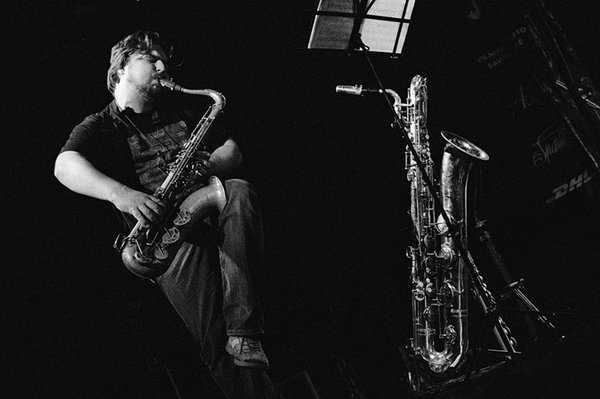 Liudas Mockūnas also succeeds in crossing the chamber borders while performing solo and this was exactly what has happened a couple of years ago, when he performed a monologue in New York’s Downtown Music Gallery. Soon after, he made an appearance at the famous Brooklyn club Zebulon, where together with Dalius Naujokaitis (percussion), Kenny Wolessen (drums) and Dan Fabricatore (double bass) he gave a somewhat more traditional concert, featuring the characteristic sonorics of free jazz saxophone ensembles without a harmonic instrument. During his stay in the homeland of jazz, the Lithuanian saxophone player also visited another special Mecca of jazz – the Washington Sonic Circuits festival, devoted to experimental music. This type of music is spontaneously produced by Mockūnas and the assiduously experimenting composer and sound artist Artūras Bumšteinas. The two artists have met again for a spontaneous dialogue at the Nord Sound Station Festival.

A graduate of Copenhagen’s Rhythmic Music Conservatory, he has always kept track of the musical events at the Danish stage, so he simply could not overlook the newly formed Danish trio Angel, which shares so much in common with himself: an interest in exploring the sonoric limits of instruments, producing the ultimate scope of non-traditional sounds and the desire to play with the categories of thickness, intensity or power of sound. During their appearances in Klaipėda, Tallinn, Helsinki, Riga, Vilnius and Kaunas, at the festival VDU Jazz Jungtys (VDU Jazz Connections) the saxophone player and guitar trio managed to go without the traditional array of sounds.  Knockings, rustlings, snarls and echoes entwined into a seemingly monotonous uniform noise, changing with every second and every sound. Using different parts of the instrument bodies to produce yet another shade of noise, the four performers delivered a strangely fascinating timbral dynamics at micro level, at the same time maintaining the macro wavering, continuously progressing towards enormous crescendos and equally huge refluences.

Liudas Mockūnas is a new prophet of the Vilnius jazz school who by no means have put a period to the endless gallop of projects. At least for now – no missions are impossible, everything can be embraced and such tempo seems to correspond to the sound life of an active avant-garde jazz artist.